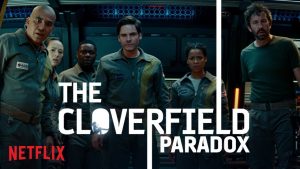 Hey everyone we are back again with another movie review. I was originally going to talk about Superbowl trailers but one of those trailers was for The Cloverfield Paradox, called The God Particle when it was on my list of anticipated movies for 2017. And not only that, we also got a release date, it was coming out on Netflix that night after the game. And I finally got a chance to see it. So let’s see what all that waiting is for. I have tried to write this as a non-spoiler review. I really have. That’s part of the reason this is later than anticipated. But unfortunately, this is one of those movies you can’t talk about without talking about the movie. So, out of the ordinary and spoilers ahead.

I’m not really sure where to start with this one. I’ve been sitting on writing this because I felt like I needed some time to parse through my thoughts on this. So here we are, and hopefully I can make some sense of this. Since I will be talking about specific things that happen, hopefully we can come around to some kind of conclusion once we get to the end.

We’ll get this out of the way; The Cloverfield Paradox isn’t a bad movie, if that’s where it seemed like I was going. I’m just not sure it was a good movie. Even that seems a little harsh. There was a lot I really liked about this movie, I just had some problems with it, too. Even writing this I’m still not sure how that will affect my final verdict. But let’s get into some details.

Let’s accentuate the positive here, to begin with. This is a really good cast. Not only is it a really good cast but the performances are all really solid. None of the problems I had with this movie had to do with the actors. Having the film on a space station, it leads to a similar dynamic as on the International Space Station in which the people there come from a variety of different backgrounds and different countries. That leads to some really fun and interesting interactions between the cast, although as I’ll talk about later, it’s something I also wish they’d really gone deeper into because there’s some amazing potential that doesn’t really get utilized. But otherwise, that aspect was one of the high points, even if we made a few Zemo jokes and at one point went ‘That’s where that guy’s from! He was the one that Jane went on a date with in Thor: The Dark World!’. 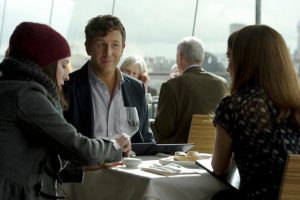 The second thing I really liked was the sci-fi aspect of it. For the most part. The whole idea with the Shepard accelerator (I only made one Mass Effect joke when they said that, I promise) was really interesting, and the fact that it was something that they had to work on and wasn’t successful right away. Sometimes that kind of thing is too easy and fires on the first go, and that would have robbed us of some of those character interactions that I liked. I liked the whole multiverse/temporal paradox angle a lot, too. The extra level of uncertainty in what to believe, what is true for our universe and what is from the other one, and that kind of thing. I thought the introduction of Jensen, a character who was part of the mission in the ‘alternate universe’ was actually pretty creepy. Like when she’s stuck in the wall and shrieking and then recognizes Hamilton and you’re like WTF is going on here? That was cool. I’m such a sucker for sci-fi, and this one had a lot of ‘my things’: both hard and speculative sci-fi, working off of actual science as a starting point, multiverses, ethical questions/how people deal with stuff. This should’ve been a slam-dunk, guys.

Other things I liked: The effects in this film were overall well done. There wasn’t any point where I went ‘oooh, that looks bad’ like I have in other movies. Especially in sci-fi where you need the technology/space stuff/etc. to look convincing or else things get cheesy pretty quick. The score was good but a few days later here nothing particularly memorable stands out, so do with that what you will. There is a little bit of humor in and amongst everything that’s happening and that generally lands. I didn’t really care for the whole bit with Mundy’s arm at the time, but the arm as a character has kind of grown on me and I’m pretty okay with it now. I also liked how the Shepard was supposed to fix everything, ended up causing a huge mess in the process, and then in the end saved everybody and now everything will be hunky dory. That’s a meta thing though, and not to do with the movie. 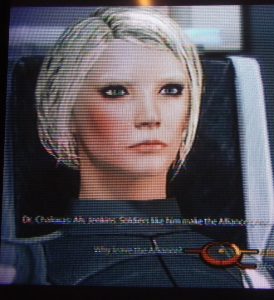 which in NO WAY represents how Allie Shepard defeated the Reapers, I swear.

Okay, let’s talk about the part that sucks: the flaws. I have two main issues with this movie that are sadly kind of big ones in the grand scheme of things.

As me and the other half were hashing this out, this was my solution: when the station disappears we go to Earth the first time when Michael Hamilton finds out. We stay in space for the rest of the movie until the very end. Have Michael and Joe’s final phone conversation in voiceover as the pod comes back down to earth, ending as it cuts through the cloud. Keep the final shot of Clovie rearing up immediately after. End. Boom. I would also cut out most of the references and uses of the word Cloverfield except for maybe the conspiracy theorist on tv at the beginning (but I would have cut that off sooner. It went on too long and got too on the nose) and seeing it on the outside of the station as they depart for the final time. That’s it. 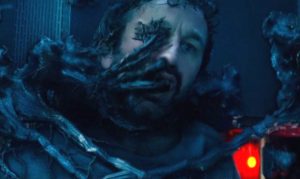 When it was all set up to go right through him? The wall's obviously still magnetized or it wouldn’t have pulled that CO2  canister. It would’ve made more sense if the sealant and/or Mundy hitting the wall had somehow caused the explosion. And why did the other wall suck in and pull off his arm earlier on? There is even less logical reasoning for that other than to have the humorous disembodied arm bits later on. Did alternate Mundy have one only arm and this was a ‘course correction’? It’s never touched on, nor does the ability of the arm to move independently and intelligently, even after the rest of Mundy dies. I understand that it’s the whole idea of ‘we’ve ripped a hole in space and time and now weird stuff is happening and we have no idea what the hell is going on’, but there’s no logic behind it the way there was for the displacements. And no one ever says anything about it. If this was happening to you, wouldn’t you at least ask maybe once, if only to yourself, what is going on? I needed something here, guys. I don’t care if it’s a Star Trek-esque technobabble explanation, but you can’t just have stuff happen and gives us nothing on why. And I don’t want to hear that ‘mystery box’ garbage, that’s no excuse to be sloppy in world-building. 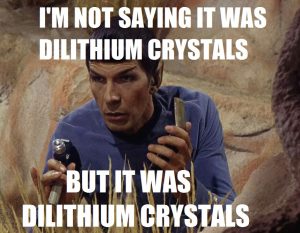 Well, that’s off my chest now. So, final thoughts? This was an okay movie. If I hadn’t been anticipating this movie for this long would I have thought differently of it? Maybe, but given that my two big issues with it were story-driven, probably not. The original premise of the film, back when it was called The God Particle, was just so interesting that I was really looking forward to a good, hard sci-fi film and I didn’t quite get what I wanted. Would I recommend it? Well, the performances are good and you can watch it on Netflix literally anytime you want, so if you’re curious, give it a go. It’s only an hour and forty minutes, so even if you don’t like it, it’s not particularly long. I wish I could’ve given this the glowing review I’d been hoping for. I guess I’ll just have to wait and see how Annihilation is when it opens next week. Although before that, and in fact tomorrow, we’ll be heading down to see Black Panther, so expect a review for that very soon.