Hey everyone, we are back with a new movie review! Today we are taking a look at Toho’s 30th Godzilla feature (and the first animated one) with Godzilla: Planet of the Monsters. Now this film was originally released in November 2017 in Japan, but only got a worldwide release this month via Netflix. We watched the English dubbed version for this review and as usual, no spoilers ahead.

Everyone at our house was pretty excited for this movie. I mean, new Godzilla, right? And not only that, seeing the Big Guy in a new format was definitely something to look forward to. Animated Godzilla? Other than the better-than-the-film cartoon based off of the 1998 American Godzilla (or ‘Zilla’) movie, that’s something we hadn’t seen before. And after the disappointment that was Shin Godzilla, we were hoping for something better.

To put it simply, I really enjoyed this movie. One of my favorite things, to be honest, is how sci-fi it is. It really is more of a science-fiction movie than a ‘standard’ kaiju movie. I wasn’t quite expecting that but I thought it was fantastic. 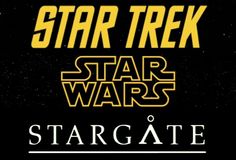 My formative years heavily featured this trifecta. I am all about the sci-fi

Not only that, but they do incorporate some legit science in there which not only advances the plot, but leads to a really interesting take on the whole thing that intersects into yet a third genre that I won’t spoil. I really thought this was an excellent direction to take, although I wonder how the later installments (this is the first of a trilogy) will factor this in.

I don’t really want to compare this all that much to Shin Godzilla but it almost seems a little inevitable since that was the last movie I saw with the Big Guy in it. Plotwise, it was a lot less hectic and you actually got to know the main character and his motivation a lot quicker and more effectively than in Shin. I mean, the hero’s pretty one-note in that he has a kaiju-sized chip on his shoulder but I’m hoping to maybe see some growth in the next installment. Also, if we’re going to compare, Godzilla looks so, so much better here. I made no secret that I hated the Godzilla designs in Shin, and it was nice to see him in his more standard look. I found his design to be surprisingly less detailed as I expected but he still had a commanding presence. This Godzilla looks like an oversized version the Legendary (ie 2014) design who got comfy and let himself go. 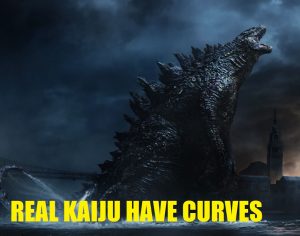 The atomic breath also looked really nice, too. Godzilla was kind of the outlier in that he looked like he was 3-D animation while the rest was a more traditional 2-D anime style. It seems like it shouldn’t work, but I thought it looked fine. The 2-D stuff looked overall really nice on its own as well.

So, on to the characters. Like I said, our hero has one motivation, and one motivation only. He’s quite, um, angsty, although I will at least give him credit in that he has a pretty good reason for it. He’s basically a rage machine and it would be nice to see him develop a little more as we go further down the line. As to the rest, there isn’t a whole lot going on. You don’t really get deep into anyone else, other than maybe a priest character but he’s still pretty mysterious at this point. This was the protag’s story one hundred percent and we’ll see if that continues going forward. It would be nice to develop more into the culture of these people and what has happened to them post-Godzilla outside of what we get through our hero. There were some hints, but I’d like to see more.

Overall, this movie was pretty good. There is a really cool concept here and I just want to see them dive right into it and get some deep exploration into this world that’s been created. There’s so much potential, I just want to see more of it all. Hopefully now that we’ve established this world we can really go into the characters and how they tick and how they’ve been shaped by these events. Is it a perfect movie? No, but what they’ve set up is so enticing that I just want more of it. The second part releases in May, so we’ll see when we can get it here in North America. Once we can, I’ll definitely be checking it out.

This entry was posted in Movies and TV and tagged 2018, Godzilla, movie review, movies, reviews. Bookmark the permalink.

One Response to Godzilla: Planet of the Monsters Spoiler-Free Review