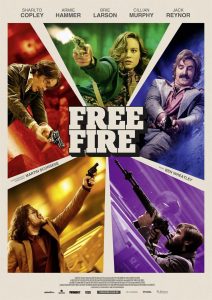 Hey everyone, thought I’d do a quick little blurb here. We watched Free Fire tonight, and while I wasn’t planning to do a review for it, after it was done I thought maybe I’d hammer out a few thoughts for it. I didn’t even take any notes, so this is all off-the-cuff here. No spoilers, as usual.

I wanted to talk about this movie because it’s a really interesting concept. Essentially, it’s an hour and a half stand-off in real time. If this sequence was in any other movie, it would’ve been 5-10 minutes, in amongst an overarching story. So for that reason alone, it’s worth seeing. In a way, it’s kind of like Dunkirk, in that you’re dropped right into it and the thing itself is more important than any one character. Also like Dunkirk, Cillian Murphy’s in this one. Oddly enough, this is also the second film this year I’ve seen Brie Larson in that also had Creedence Clearwater Revival’s Run Through the Jungle on the soundtrack. I can’t really talk about the music too much since I couldn’t hear a lot of the score (the downside of watching movies in a small house when the kids are in bed) but I did fine without it.

There were some things I really liked about this movie. All of the acting is solid and every character feels individual. Even though you don’t get tons of backstory or anything, each character is definitely their own person and you get enough of a sense of their personality that they are unique. The look of the movie is really cool, too. You really feel the 1970’s vibe from the vehicles to the outfits, etc., and the warehouse itself that this all goes down in is a really neat location. There’s so much potential in the location that they make use of that would’ve probably been skipped over if this was just a sequence instead of an entire film. And dirt, dust, and blood aren’t skimped on, giving it a real, gritty feel. There’s also a surprising amount of humor in there that really keeps things interesting.

Complaints? I feel like I wanted to see Brie Larson’s character do more. It feels like you don’t get much of her or at least much of her doing as much as I expected. Other than that, nothing really from me. I could see how some people might not like the more realistic aspects of the shootout. I’ll put it this way, if you’ve seen a big shootout in a movie with someone like Schwarzenegger, Stallone, etc. and are expecting the kind of acrobatic, fancy stuff from those, you might be disappointed.

Overall, Free Fire was pretty cool. Not top of my list, but a neat little film.