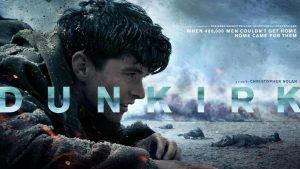 Hey again, everyone! Well, July’s been pretty busy for movies and it isn’t slowing down yet. Today we are looking at the latest effort from director Christopher Nolan, Dunkirk, based on the evacuation of soldiers from Dunkirk, France during the Second World War. As always, no spoilers ahead.

Where to start? First off, this film looks gorgeous. I loved the variety and the unique places that the camera was in so many of the shots that made it fascinating to watch for that alone. The dogfights between the Spitfires and the Luftwaffe planes are breathtaking, and the struggle on the ground is sufficiently dark and desperate in comparison. This is a fairly short movie, clocking in 106 minutes but in a way it seems longer than that. And I don’t mean that in the ‘this movie felt so looooong’ way. It just felt like there was too much going on to have such a short runtime, but at the same time, it never feels rushed. You’re so engaged through the entire thing that you feel like you’ve just watched a much longer film.

I don’t think it will surprise anyone to hear that the story in non-linear, and jumps around a bit through the process of the evacuation between more than one set of characters. There are almost no titles at the beginning of the film either, you just pretty much go directly into it. And while it never shies away from the horrors of war, there isn’t anything gratuitously gory seen on screen. It’s definitely more of the psychological impacts, the effects of the war on the minds of the men there. Speaking of which, the one thing I really appreciated in this film was how the soldiers on the beach were appropriately (and heartbreakingly) young. A lot of big war movies like this don’t seem to do that, or have too many big names in it. Having young, relatively unknown actors in these roles really made it more realistic for me. Also adding to the realism is the fact that they shot in Dunkirk on the very same beach that all this took place. Speaking of the cast, everyone does an amazing job here. Yes, even Harry Styles, for any naysayers out there (I literally know nothing about One Direction). This film does something interesting in the way that it’s setup in regards to story and characters but I don’t really want to say anything else because it feels too much like a spoiler and it’s really something best seen for oneself. 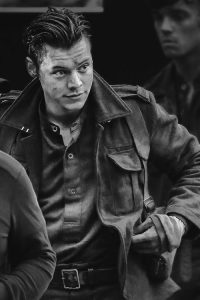 Your first role is in a Chris Nolan historical war film? Mad respect from me. Could've been a crappy, dime-a-dozen rom-com.

There one last thing I’d like to talk about, and it’s something I’ll definitely gush about in great detail: Hans Zimmer’s score. Wow. It keeps you on the edge of your seat and engaged in a way that I don’t think I’ve ever really felt from a score alone. It’s not big and bombastic, but rather threaded deftly in between everything that’s happening in the film. There’s also one particular and interesting thing I noticed when one character on screen as far as sound/music goes, and it really amps up the feeling you get while you’re with him. I didn’t notice it at first, but as soon as I did, I couldn’t un-hear it and I thought it was very clever. Incredible, and heightens every emotion and really adds to the immersion.

In conclusion, this movie is well worth seeing. I really don’t have a lot to say because I really think you should just see Dunkirk for yourself. That, and I don’t want to say anything that might spoil it in any way so I’m not going to say too much, just that you should go see it.

PS- Here’s the thoughts of an actual Dunkirk veteran. I might be able to talk about it as a film, but this is from someone who was actually there and how he felt about the portrayal of what happened. Just… keep a Kleenex handy, because if you’re like me you’ll be sniffling pretty quick when you hear him talk about what it was like.

This entry was posted in Movies and TV, Uncategorized and tagged 2017, anticipated, Dunkirk, movie review, movies, reviews. Bookmark the permalink.