War for the Planet of the Apes Spoiler Free Review!

Posted on July 20, 2017 by melmo44 | Comments Off on War for the Planet of the Apes Spoiler Free Review!

This is the first of the Apes films that we’ve actually gone to see in the theaters. When Rise of the Planet of the Apes was announced, we were skeptical. Why do we need this movie? Considering how the last Apes movie had gone (the Tim Burton reboot), it seemed strange to try and do something with this franchise. We didn’t see it until much later, closer to the release of the sequel, Dawn of the Planet of the Apes. And boy were we eating our words when we finally sat down to watch Rise and later Dawn. These films are incredible, there’s no other word for them. So we were decidedly excited to head out to see the newest installment. So how does it live up the standards of its predecessors?

So many times third films in a trilogy or series drop the ball in some way, or highlight or exacerbate problems in stretching out the story to three (or more) films. War for the Planet of the Apes does none of those things. It stands among the previous two with ease. If they leave this as a trilogy (and really, that would almost be best), it will stand as hands down one of the best film trilogies ever. I’m not hyperbolizing here, I can only think of one trilogy (Lord of the Rings) in which all three films were this consistently excellent.

Let’s start with the characters. We are once again following the chimpanzee Caesar, played by Andy Serkis via motion capture. Can we just give him a big armful of awards, please? Because his performance in all three of these films is nothing short of stellar. The incredible depth of emotion and the degree to which you are pulled into Caesar’s story is due in no small part to that performance. And not only that, but over the course of the three films we have seen, no pun intended, Caesar’s evolution as a person and a leader to his people as he tries to keep them safe from humanity. This really is Caesar’s story, although the rest of the cast is really excellent as well. Woody Harrelson’s Colonel could have easily become an over-the-top, cheap, tropey villain but he manages to bring a calmer menace to him that makes him more grounded. Similar to that, Steve Zahn’s character, Bad Ape, could have been horribly annoying, but never goes Jar-Jar Binks and in fact is a rather sympathetic character when you really think about it. Amiah Miller gives a beautiful performance as Nova, the little girl from the trailers, and her character gives one of the nods that foreshadow the original film. The rest of the cast, as I said, it really well done. I also really liked the Chimpanzee Lake, played by Sara Canning.

The story builds from the first two movies. Caesar and his people are trying to live their lives, but humans won’t leave them alone. Without getting into spoilers, we see both Caesar and his people tested and go on a journey to finally find peace for themselves. It’s both intense and highly emotional. I’ve never found a film or films where I’ve so actively rooted against my own species as here. That’s not to say it’s all depressing, there are some downright humorous moments as well. You get so much, well, humanity from these apes, and the themes are very human and very familiar. I can’t say anything else, you just have to see it.

We have to talk about the special effects in this movie. As I said above, the apes are done in motion capture, and the motion capture is excellent. There was no part in this film in which I thought ‘well that’s a CG ape’. All of the special effects looked fantastic, and there were even some top notch sound effects, especially right at the beginning of the film. There were even a few times where you look at Caesar and he almost looks a bit like Andy Serkis, and I thought it was a really neat addition. 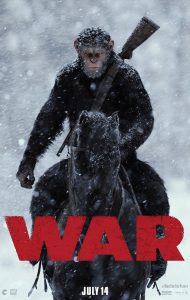 The final thing I want to talk about quickly is the music. Michael Giacchino did the music for this film, and this is one of his best (and he just seems to be everywhere lately!). I wrote in my notes a few times about how I loved the score. It wasn’t too overblown and dramatic, and in places even got downright whimsical. It really reminded me of an updated version of the kind of score you’d get in a film like the first Apes film. It was almost old-fashioned in a way. I loved it.

In conclusion, War for the Planet of the Apes is an incredible film and you should go see it. But see it in 2D. We saw it in 3D and it added basically nothing and it was more about the show time than the format for us. So that would be my only recommendation other than go and see this now!

This entry was posted in Movies and TV and tagged 2017, anticipated, movie review, movies, reviews. Bookmark the permalink.