What Were They Thinking?: Keeping It Separate

You know, a few months back I did a What Were They Thinking? (the place where we take a look at all of the stupidest, most ill-advised things in all of comic book history) we covered the introduction of one of DC's earliest black superheroes, Black Lightning, and how he managed to dodge a bullet in his first few issues by not having a terribly racist origin story. At the time I thought DC had gone mad, especially considering that Black Lightning was to be only their second black superhero. But, turns out I was wrong on two counts. Firstly, Black Lightning wasn't DC's second black superhero and in fact, DC didn't go mad. They were always mad. They just managed to get away with it on the low down the first time and only got caught when they really tried to push the boat out. 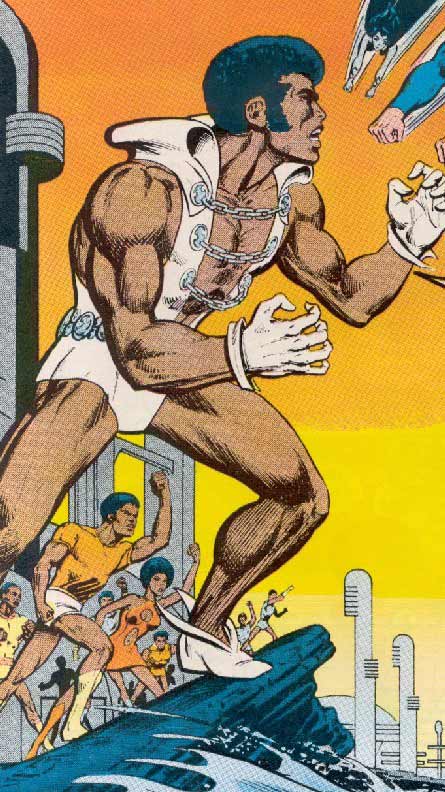 So, anyone who is a fan of the Legion Of Super-Heroes may know who we are talking about this week, though maybe not why. This week's focus is on the Legionnaire Tyroc, the guy with the reality warping scream that did weird stuff depending on what sound effect the writer used. Turns out he was the second black character DC ever introduced, although according to Jim Shooter he was meant to have been the first, introduced to the team back in the 60's, but DC vetoed the idea. That's a mark against DC there, especially considering that Marvel had already got Black Panther and Falcon out the gates before DC got around to giving us John Stewart. But what's more interesting is what Jim Shooter would later say about Tyroc:

"...I always wanted to have a character who was African-American, and years later, when they did that, they did it in the worst way possible....instead of just incidentally having a character who happens to be black...they made a big fuss about it. He's a racial separatist....I just found it pathetic and appalling."

To clarify, Tyroc was born on an island made up of the desendants of escaped slaves and the locals weren't exactly friendly to any outsiders. He attacked the Legion when they responded to an emergancy on the island and accused them of racism (to which the brilliant response from the Legion was "He's really bitter isn't he". Way to go DC, way to go). I can't exactly say that DC did it in "the worst way possible" because the Brown Bomber has to take that particular cake, but still. We also have some nice hot takes on the character from one of his co-creators, Mike Grell (another guy who tried to introduce a black character to the Legion but was prevented by higher ups, this time his editor, until they gave Tyroc the go-ahead):

"I kept getting stalled off...and finally comes Tyroc. They might as well have named him Tyrone. Their explanation for why there were no black people [in the Legion] was that all the black people had gone to live on an island. It's possibly the most racist concept I've ever heard in my life...I mean, it's a segregationist's dream, right? So they named him Tyroc, and gave him the world's stupidest super-power."

So, not getting off to the most auspicious start then. But surely later writers and artists would warm to him, once they got all of the racist kinks irons out and he'd joined the Legion? Nope. Paul Levitz, who wrote the Legion for 15 years, never used the character during his original run, claiming that his sound based powers were too hard to work with in a silent medium, and only used the character once during his second run. In fact, the character has barely been seen since 1989, despite being a confirmed Legion member.

But, going back to the whole black only colony. This does have some basis in reality, as having a black's only nation was a goal of some black separatist movements during the 60's civil rights movement, such as the Nation Of Islam and the Black Panther Party. Now, out of all of the groups in the civil rights movement those two are the ones you'd least want to associate yourself with as a company, one is on the watch list as a terrorist organisation and the other widely associated with violence and gang mentality. Fair or unfair as the association between the comic and these groups may be, by including a character with a black seperatist ideology you are inviting those connections. And wouldn't you know, DC done did it again the next year.

Everyone knows what the outcome of the Death Of A Prince arc from Adventure Comics/ Aquaman was, it saw Black Manta kill Aquaman's son after all, but I wonder if many people remember what Manta's motivation throughout this entire ordeal was. Yup, he was also influenced by black separatist ideals. He wanted to create an underwater colony for black people to escape the racism of the surface world. And this story took place literally a year and a half after Tyroc was introduced (well, this bit did, the entire thing stretched from 1974 to 1978). You've got to wonder why Black Manta and his gang didn't just go to Tyroc's island, it would have saved a whole lot of trouble.

One Response to What Were They Thinking?: Keeping It Separate