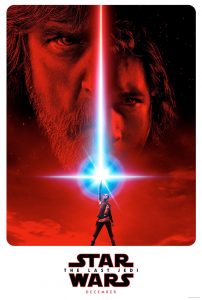 Look at this poster! Look how awesome it is!

First Thor, now Star Wars! What a week! With Star Wars Celebrations on right now, there was a rumor/hope/thought that perhaps we'd see our first footage for the upcoming Last Jedi. And we got confirmation of that this morning 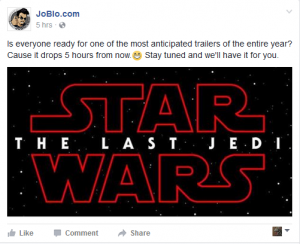 Needless to say, we were waiting in anticipation but now, here it is!:

Okay so just a few thoughts from me before I leave you to bask in the Star Wars awesomeness. No spoilers, just musings (I'm obviously not at Star Wars Celebrations and have no inside knowledge):

1) It doesn't give away too much. I loved the marketing for The Force Awakens in that you knew almost nothing about what was going to happen but got lots of gorgeous visuals. I'd like to see that continue.

2) Kylo Ren's (?) smashed helmet, surrounded by glass. What does that mean? Is he doing away with that persona, re-crafting himself into something else? Will he take on a Darth title after he finishes training, or did that practice die with Vader? You also don't get to see if he has a gnarly face scar or not from that blow he took at the end of Force Awakens.

3) That mysterious location that looks like tree roots or a crazy rock formation. That intrigues me. What intrigues me more is a book, with the Jedi symbol on it. How old is that? No one uses actual paper books in the Star Wars universe. I want to know more about that.

4) You get bits of the other story as well- the continued fight of the Resistance against the First Order. There's some really cool clips of bits and pieces from space battles, you get to see Finn and Poe briefly, etc.

5) Finding out about Luke's other students. There's a big shot that is clearly part of the story/flashback of what happened to them and should add more to his and Ren's characters.

6) Luke's words at the end are very interesting and could be taken more than one way. Should the Jedi end altogether, or merely the way the Jedi were organized and run prior to Order 66? Does he think that Light-side users should do something different than the way he was taught? Or is he just sick of it all?

7) Okay, last one. The music. It starts off so Star Wars. But by the end there's such a powerful darkness to it. We all know the main theme: it's grand but light in tone. It's bright and triumphant. This isn't. What does that mean for the movie? If anything? It's amazing though, and makes the hair on the back of my neck stand on end.

So there's my rambling first thoughts. What do you guys think? Did any of that make sense? What did you take from the trailer? Anyways, we'll see you all next time!

End note- Last Jedi is out in December. Dark Tower is out in July and we still haven't gotten a trailer. That both aggravates me and makes me nervous.

This entry was posted in Movies and TV and tagged 2017, movies, star wars, trailers. Bookmark the permalink.

One Response to Trailer for Star Wars: The Last Jedi!