Posted on February 20, 2017 by melmo44 | Comments Off on The Lego Batman Movie Spoiler-Free Review

Hey everyone, today we’re going to be talking Lego. Lego Batman, specifically, as we saw him first in The Lego Movie. He was a side character there, but now he’s front and center in his very own film. So let’s see how he did. As always, this review is spoiler-free, so read on without fear!

Now movies that spin off or give the focus to a side character can work out really well. I really enjoyed The Scorpion King for what it was, not to say anything of films like The Wolverine and Rogue One: A Star Wars Story in terms of quality. Then again, you also get things like Minions, Elektra, and X-Men Origins: Wolverine, which are the complete opposite of the spectrum. Everything I’d seen for this movie had made me really excited for it, and with a character the caliber of Batman, I’d hoped this would be one of those good spin off films. I was not disappointed. 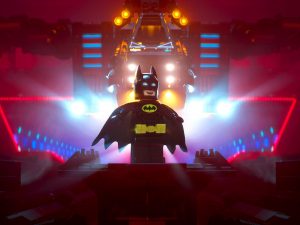 Sometimes, everything IS awesome.

Batman has a hugely rich history, especially cinematically, and they take full advantage of this. This movie is not afraid, and in fact takes a particular glee, in referencing and poking fun at other incarnations of the characters. It’s almost Deadpool-esque in it’s self-awareness and referential humor. They aren’t as blatant as the way Deadpool does it, but there are even a couple of instances where they break the fourth wall. There were some great laughs from this, and many, many Easter eggs for fans. I honestly don’t know how the packed so much in and still had room for an actual movie. That and the soundtrack was awesome, with a few songs showing up I didn’t not expect at all, but really worked.

Surprisingly similar in a lot of ways.

The animation follows the same format as The Lego Movie, in that absolutely everything is made from Lego that you see in the film. It’s once again extremely well done and they do a really good job in giving Lego Gotham the dark vibe the city is famous for. It’s not overwhelmingly so, but it is quite the contrast from bright, sunny Bricksburg of the first film. I also like that the animation works within the limitations of the Lego medium. The Lego games (my son is playing Lego Batman 2 as I write this), and some of the shows and shorts allow the characters great flexibility of movement that an actual Lego figure can’t do. I like the extra authenticity that it gives to keep it consistent to what is actually possible.

But what about the story? The Lego Movie was such a revelatory surprise in that it had a story with an incredible amount of depth, emotion, and heart. I’m not sure anyone expected a movie that, on the outset, could be seen as a cash grab film based on a beloved toy, to be so friggin’ good. Lego Batman is a worthy follow up in that respect as well. In between the near-constant jokes is a very real story about these characters and their lives. The characters actually have arcs that they go through over the course of the movie, and you actually see how that impacts them. I of course don’t want to go into specifics, but they are done a justice that many, more ‘serious’ endeavors haven’t done them. For example, I really liked how the relationship between Batman and Joker was done. It was familiar but done in a different way than we’ve really seen before, playing on ideas that we’ve seen in things like The Dark Knight but giving it a bit of a twist. 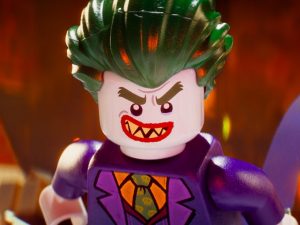 "I think you and I are destined to do this forever."

The cast of the film is also on point. Will Arnett is back as Batman, and while he’s the same broody jerk we’ve seen before, you actually get some moments where you really see through the façade to the damaged guy underneath in a way that other Batmans (Batmen?) aren’t often able to convey. You actually start to feel for, or at least understand him. I wasn’t sure how Michael Cera’s Robin was going to play out, but rather than being the annoying sidekick we see so often, you really feel for him too and he really does contribute a lot to the story and the movie overall. Rosario Dawson is a kick-ass Barbara Gordon and Ralph Fiennes has the perfect dry, almost-snark for Alfred. The whole cast is really excellent, and I was surprised how much I enjoyed Zach Galifianakis as the Joker. He was really good, and he did the voice in a way that was distinct from the other versions we’ve seen; not too Hamill, not too Ledger, not too Nicholson. It was really nice to see him do something fresh that really worked.

So, in conclusion, Lego Batman is a really fun, fairly frenetic ride that’s going to appeal to both kids and adults without talking down to either. There’s a ton of stuff for both sides to enjoy and overall is not just a good Lego movie, but a really, really good Batman movie. I honestly got more emotional heft out of it as an actual Batman story than the Snyder film and Nolan trilogy. I’d venture to say that in that respect, as a Batman movie, ignoring the rest, it’s the best since The Dark Knight. Overall, I absolutely recommend it and I think it’s a film that everyone can enjoy, from a kid seeing Batman on screen for the first time to the cynical veteran fan who’s seen it all. Go check it out.

This entry was posted in Movies and TV and tagged Batman, Joker, lego, movies, reviews. Bookmark the permalink.