So my Facebook and Twitter feeds tell me that there was some manner of large sporting event this past weekend. 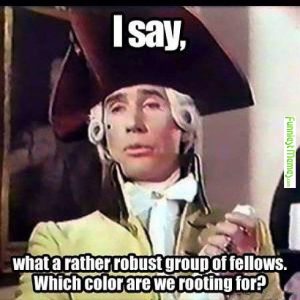 I kid, of course. But, as far as the Super Bowl goes, this is kind of my attitude toward it: 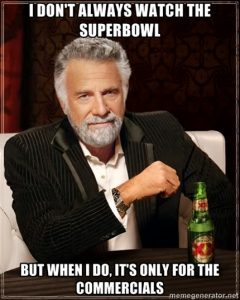 So with that being said, let’s have a look at all the goodies we got this year!

Remember how I said in my Movies of 2017 that I hadn’t actually watched the first one and I needed to remedy that? Well, remedy that I have and I’m kicking myself for not seeing it sooner. I haven’t had this much fun with a straight-up, unapologetically badass action film in a long time. It was insanely awesome and I am definitely catching the sequel in theatres (it actually opens this Friday). But let’s get back to the trailer. Thirty seconds it may be, but it just makes me want to see it all the more. Notice even the subtle jab at the competition also opening this weekend (although I’m not sure how much overlap there is between the two fanbase-wise). My reaction to this was hardly PG, mainly consisting of a word beginning with ‘F’, followed by ‘YES’. I think this one is going to be a good time.

Ghost In the Shell

There’s not really anything new in this one, only really one quick snippet of a scene that stands out as different from the longer official trailer. I hate the use of that loud, static noise, though. That’s not just limited to this trailer either, it’s always annoying. I would have preferred if they’d stuck with the remixed Enjoy the Silence from the first trailer. This one isn’t top of my to-watch list, but I’d like to give it a chance at some point.

This… well this looks like Transformers. At least the footage is new, I guess. Still not much information as to what’s actually going on. Which, while good in a way, it’s not really making me want to rush out and see it. This is the fifth movie in, deciding to go all Force Awakens with your marketing isn’t going to work when what we do see just looks like more of that same. I watched the trailer three times and I literally felt nothing after. Not excited or disgusted, just nothing. Probably not rushing out to see this one.

Now this trailer is making use of it’s thirty seconds. There’s a definite Alien-ish vibe here that’s really cool. The longer trailer gave it a more science-like feel, but this one is playing up what I assume will be the other side of the story. I was already interested in this movie, but this trailer has certainly piqued my interest again in it. I love a hard, science-heavy sci-fi and I hope this delivers on that.

A Cure for Wellness

This movie looks dark. That may be an understatement. If it’s anything like these trailers paint it out to be then this is going to be a twisted, suspenseful and beautiful-looking film. It’s one of those movies where there’s way more going on and it won’t be till the end (or multiple viewings) that we see the whole picture. At least I hope so. I’m interested to see how it all comes together, or comes apart, when all is said and done. The trailer has a wonderful atmosphere to it, very horror and also very old-fashioned and refined.

Guardians of the Galaxy Vol. 2

Well that was an abrupt shift in tone from the entry above. First off, can I say I love the music choice here and in everything Guardians related? There is literally nothing else I can say about this movie. There’s only so many times I can say I’m super excited and can’t wait to see it.

Pirates of the Caribbean: Dead Men Tell No Tales

I don’t know guys. I mean, once again, I approve 100% of the song choice here but you can’t just slap a Johnny Cash song over your trailer and expect me to fall for it. It’s kind of like the Transformers trailer, it doesn’t really feel new or fresh or like they’re trying to do something different with it. Undead pirates looking for Jack Sparrow? Wasn’t that the plot of the first movie? And those undead pirates looks pretty janky and badly animated (I’m sure it’ll be fine in the final cut. Right?) It’s been six years since the last Pirates movie, but I can’t help but wonder if it’ll pull a Jurassic World with little callbacks and Easter eggs to the first one and how good it was. If we see it, this one will be a rental. Best-case scenario, this one might be fun.

This is yet another movie I’ve already spoken about multiple times. I’ve been on board from the get-go and that’s unlikely to change. I’ve stuck by the X-Men and by Wolverine since the first film back in 2000 and I intend to see this one to its end.

The Fate of the Furious

This looks like more from what I expect a Fast and Furious movie entails, lots of fast cars, explosions, etc. I’m still wondering about that story, though, and how that comes about. Is it enough to get me to see it? Not really, much as I’d love to watch Dwayne Johnson and Jason Statham trade barbs and blows back and forth. This is a rental, at best, for me but I bet it’s got fans of the series buzzing pretty good.

Okay, this one looks like it could be a lot of fun. I’m willing to give it a shot, probably as a rental. A few new bits in this trailer that wasn’t in the other one mixed in with some of the same. This one definitely plays up the humor whereas the first trailer was about split with action. Can I just point out that awful greenscreen at the end there? Ouch. Luckily Dwayne Johnson’s charisma looks like it’s going to be what saves the day here, and I’m interested to see his rapport with Zac Efron (who’s not a bad actor, but he’s in some pretty atrocious movies). This’ll be a fun movie night one time after the kiddos go to bed, most likely.

Anyways, that’s the Super Bowl Trailer report. I know Lego Batman and John Wick 2 open this weekend, but due to work I’ll probably being seeing them the following weekend. So you can expect reviews of those then. Until next time!

This entry was posted in Movies and TV and tagged movies, reviews, trailers. Bookmark the permalink.