A Winner Is Not Us: Adapting Video Games Into Film 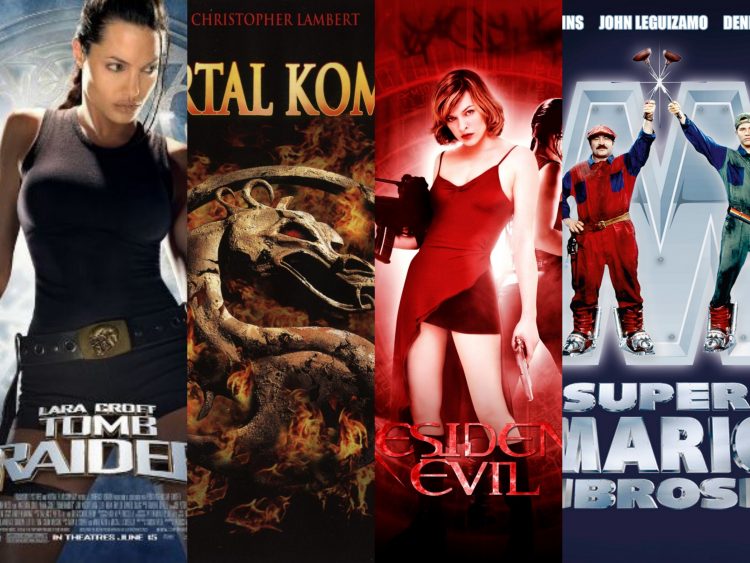 Hey, everyone. Today I wanted to talk about something a little different. I know there was both a new Power Rangers and a new Logan trailer last week that I probably should be discussing, but thinking about those and other, upcoming movies has made me think a lot about movie adaptations. Now I’m not here to say that there is some sort of epidemic of movies adapted from other material, because this has quite literally been happening since the beginning of film. And adaptations run a long gamut in quality as well, it’s not all either good or bad. But there is one particular genre of film adaptation that just never seems to quite… get there. I refer, of course, to the much-maligned video game movie. So, in honor of the release of Resident Evil: The Final Chapter this past weekend, let’s see what if we can make some sense of this.

I have formulated a few theories as where the problem may lie. Feel free to add your own in the comments!

Characters- Characters that look really good and as though they fit into their gaming universe may look completely ridiculous when put into live action. This goes for both human and non-human characters. For human characters, it is often the costume that is the problem, and there becomes the issue of making it work in the film without losing too much of the distinctiveness of the characters’ look. This is especially true of female characters, as they often have to make their costumes more practical in the sense that they can actually be worn in real life (see all female characters- Mortal Kombat, Cammy- Street Fighter). Except Lara Croft, at least in the first movie.

For non-human characters this is even more difficult in that they need to be realistic-looking enough that you can actually buy that they are even there. Mortal Kombat, Doom, Resident Evil: Apocalypse, and Silent Hill achieved this through practical effects and actors in suits for their larger monsters.

Warcraft used motion capture to great effect to bring its non-human races to the big screen. 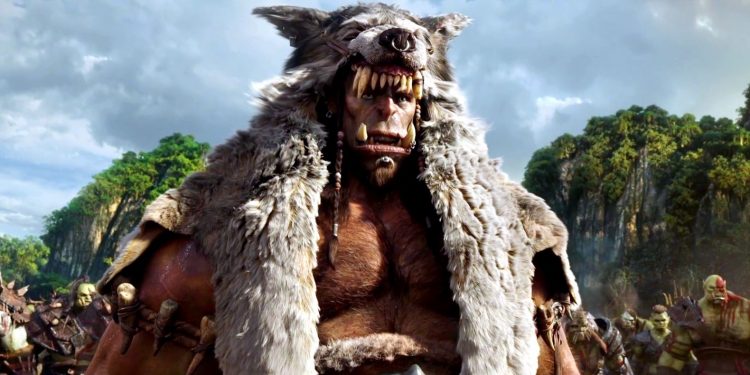 However, even within these franchises, and films themselves, there is examples of the opposite. Mortal Kombat: Annihilation’s Sheeva and Baraka, Mortal Kombat’s Reptile, and Super Mario Bros.’ King Koopa and Goombas. 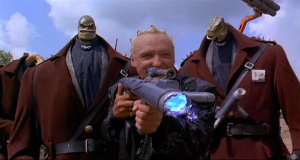 The less said about these guys, the better. Although Yoshi was pretty darn cute

Game Mechanics- I’ll be touching on this one in my next point as well, but how a video game works play-wise is difficult to bring to screen as well. A movie-goer isn’t interested in the minutia of looting and upgrades, base building, fetch quests, resource gathering, etc. These are best left as glossed over at best. There some mechanics and game play styles that have been incorporated into movies, and the results aren’t great. DOOM and Hardcore Henry both featured game style ‘first-person’ perspective. While DOOM utilizes this as a gimmick near the end of the film to pay homage to the games that inspired it, Hardcore Henry plays through its entire runtime this way. It uses parkour and straight-up platforming at times as well, despite not actually being a video game movie (just looking like one). As gimmicks go, the first person perspective, while an interesting concept, doesn’t maintain that interest for the whole movie and gets tired, especially with the shakiness of the camera.

This builds off of my above point about game mechanics. The first person perspective in Hardcore Henry wears out its welcome not just due to the shaky, first person view, but because it is hard to invest in the story, especially when it uses another video game mechanic: the silent protagonist. If the movie had been a game in which you could interact with it and feel invested in progressing the story, then the lack of dialogue from Henry wouldn’t matter. It would be one of a thousand first person shooters out there and probably would have been pretty fun. But the way you engage with a game and a movie are very different, a movie is about watching, but a game is about doing. If you attempt to make a movie feel less cinematic and more game-like, then you can lose the audience because they won’t be invested in your story.

This is where things can be very tricky. Some games, especially those in the fighting genre are often quite thin on plot and abundant on characters. This seems like a pretty perfect opportunity for a movie: lots of pre-existing characters and freedom to build a lot of plot around fairly basic premise. The first Mortal Kombat movie did quite a good job of balancing the characters but the sequel completely goes off the rails. The same problem arises with Street Fighter, as it tried to jam in absolutely every character on the roster into the film no matter what.

Pictured: not even the full main cast

There needs to be a balance, just the same as non-game movies. That's one complaint about Suicide Squad, that there were too many characters with not enough time spent establishing them for you to care about them. An RPG-type game would be even harder, as they are often in densely lore-packed worlds that even in-game are supplemented with codices for the player. In addition to this, characters are often player-made in terms of look, race, etc. Warcraft found itself with this problem, too much story to tell and not enough time to tell it (pre-editing, the film was 2 hours 40 minutes). Side-stories are usually the way to go on this, such as Dragon Age: Dawn of the Seeker and the Resident Evil series. However, that is a risk in itself, as many audiences for these don’t want the side characters and stories, they want the big story and characters. As it was, Dawn of the Seeker only had a limited theatrical run in Japan, not worldwide, and a lot of complaining is made in Resident Evil that Jill, Chris, Claire, Leon, et al., are cameo characters rather than the mains. People, especially game fans, just aren’t that interested in Alice. 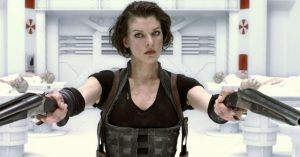 Alice! Who the... you know what, never mind.

Ah, the bane of adaptations everywhere. How closely do you adhere to the source material? How much creative liberty do you take? How much of each demographic do you alienate by changing/adhering? This is not solely a game-movie problem, don’t get me wrong, but it is as important for this genre as for any other adaptation. Warcraft was, to a tee, faithful in its story and look to its source, but was hard to follow for those not familiar with the dense lore it brought to the table. DOOM took the opposite approach, taking only the ‘fighting creatures on Mars with big guns’ part and changing most of the rest. Most of the rest of fall somewhere in between in terms of what they keep and what they change. Again, this is a balancing act that is walked by many different kinds of media, not just game-based films.

Again, this is not merely a problem in video game movies, but one for many other kinds of films as well. Who do you cast in these roles? This also follows from what story and characters to go with. If you do a movie based on the Mass Effect franchise, for example, who do you cast as Shepard? Do you go with male or female Shepard? We’ve all seen the casting announcements for movies, and the vitriol that can follow if some character doesn’t ‘seem’ like they were cast properly, and it being a character that you have played as or alongside can lead to some pretty strong feelings. Imagine, will you, if they ever really did make a Legend of Zelda movie, or something of that prestige. Can you imagine the level of scrutiny that would follow the casting of that? And a movie can suffer for its casting, there’s no question. I thought Max Payne was a pretty decent adaptation, but Mark Wahlberg was not the best choice for Max (that’s not even mentioning the fact it should've been R rated, even if there is an unrated DVD version). 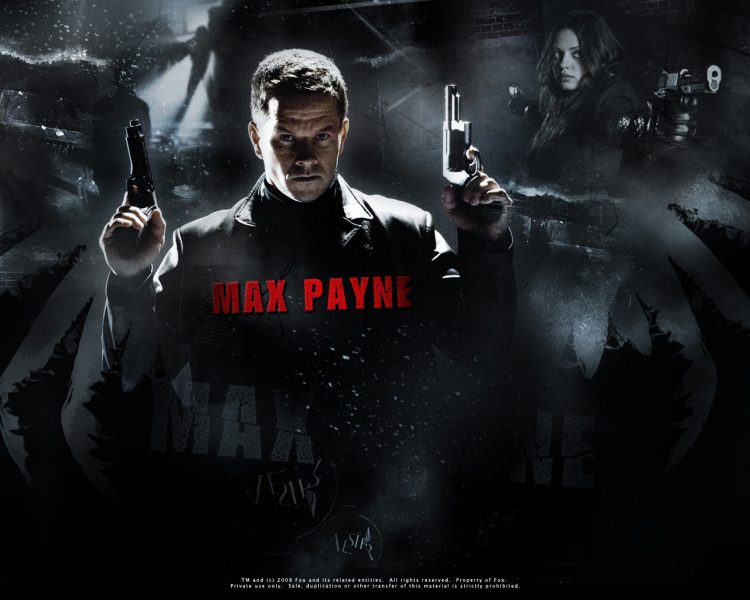 Bless his heart, he tried, but he just doesn't have that noir vibe.

On the other side to that, despite the fact that it isn’t a great, or probably even good movie (but I love it), the casting of Raul Julia as M. Bison vastly improved Street Fighter and helped alleviate some of the miscasts in that film.

There is also the point that games have become so cinematic as technology has improved to the point where a lot of times, they are more like movies anyway. Between cut scenes and cinematics, 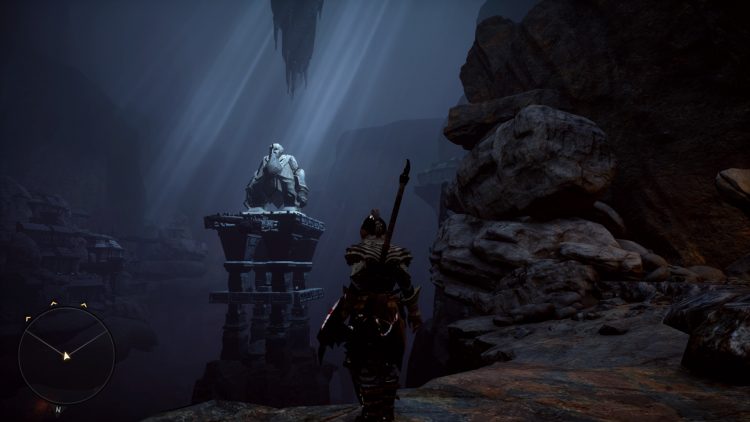 Dragon Age: Inquisition. This is an in-game screenshot I took on the XBox One version. 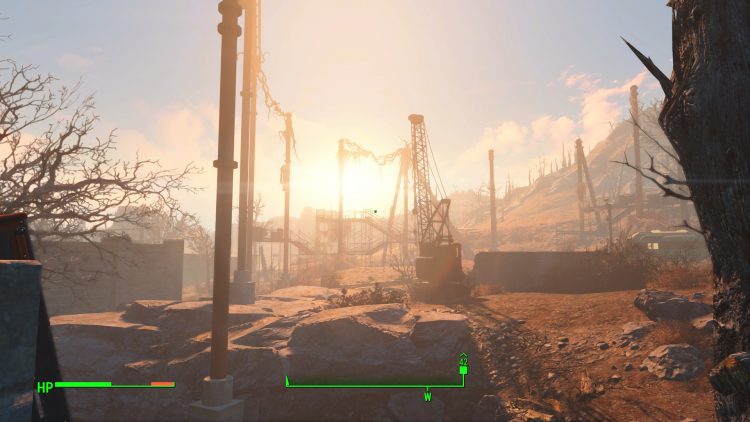 Fallout 4. Another screenshot I took in-game.

more voiced protagonists, etc., it almost begs the question of why we are making movies of games in the first place. I’m not saying they shouldn’t be done, but more like they’re almost becoming redundant. Unless they are expanding on the world and lore, but we’ve already talked about how that goes.

Common sense would tell you that the reason that so many video game movies fail because they are niche, low-budget films that lack the production value to attract a wide audience. That, we have discovered, is not true. Just because many game-films are those things (even the most expensive of the blockbuster Resident Evil films only had a budget of $65 million), more money does not equal a better movie, or at least a more well-received movie. Just ask Warcraft and Assassin’s Creed. The latter can’t even seem to catch a break despite an Oscar-caliber cast as well. In fact, one of the best/most faithful video game movies is the first Mortal Kombat film, with a budget of only $20 million dollars. Many times, even if the film is a box office success, such as Mortal Kombat or Lara Croft: Tomb Raider, it fares very badly critically. Is there inherent dismissal of video game movies by critics? I wouldn’t rule it out but I wouldn’t pin it solely on that. As a gamer and a lover of bad movies, I can let a lot slide in terms of goofiness and other flaws in plot and execution (whether intentional or not), but even I can admit that a lot of these films are just bad. Some are fun bad, but some are just outright atrocious.

So what do we do? Do we stop making video game adaptations? I wouldn’t go that far, despite the fact that making a good one seems to be as likely as finding a unicorn in your backyard. 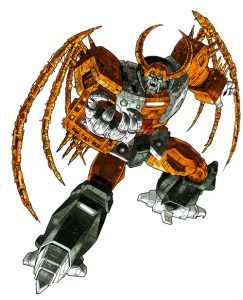 I typed that as 'Unicron' the first time. Point stands either way.

It may be an almost impossible feat, but I still hold out that faint hope that one day someone will hit upon that balance and we will finally get that good, well-received, successful video game movie. Failing that, I’d still love to see the full version of Warcraft, even though that probably won’t happen because it didn’t do well enough for a director’s cut. But, a girl can still dream, and maybe one day I’ll be right.

One Response to A Winner Is Not Us: Adapting Video Games Into Film