What Were They Thinking: I Wish They’d Destroyed This

You know, one thing has surprised me about this weeks What Were They Thinking. In all the weeks we've done this feature, a feature where we look at the stupidest, most ill-advised things in comic book history, we have yet to look at DC's Elseworlds. You know, that imprint that they publish all of the stories that are too weird to be considered canon to DC continuity, which is saying something when it is canon that you can punch a whole in the fabric of the universe with just your fist. Admittedly some of the stuff in there is good, some even very good, but that doesn't mean there isn't dross. And what dross it is. So without further ado, I present to you Superman Wonder Woman: Whom Gods Destroy 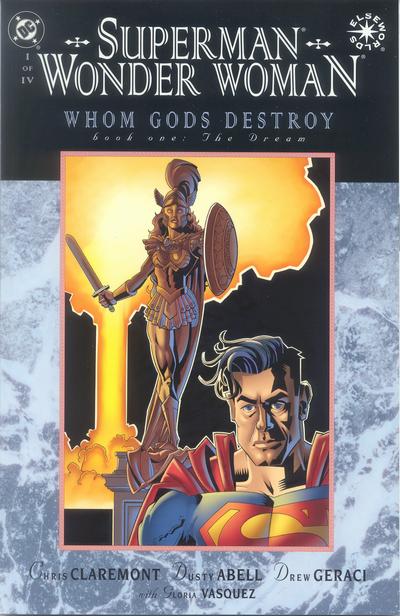 Please bear in mind that everything you are about to see and read about is 100% true and was actually published by DC in 1996. And please also bear in mind that this story was written by Chris Claremont, the man behind Days Of Future Past and The Dark Phoenix Saga.

Ok, to start off with, do not like the art style here at all. I mean WTF is this.

I mean, hey, I'm all for women looking strong, but there's something really off about this picture. Maybe it's the way she's standing or the fact that you've turned Wonder Woman into a caricature female body builder who has her bra out, but hell, it ain't the worst thing about this mess. Oh and I'm sure everyone has notice one other small thing here but we'll get to that.

So, plot synopsis time. This Elseworlds tale is set in a parallel universe where Germany didn't lose the Second World War, because that is literally the most original idea ever and has never been done before (in fact it's actually more original now to have an alternate reality where Germany DID lose the second world war). Plot twist though, the Nazi's answer to the Greek Gods, which explains Nazi FBB Wonder Woman up there. Well, the Nazi part anyway. And this is all taking place in the future so everyone who isn't either a Superhero or a God is old (so basically Lois and Lana). So, the story starts with Lois Lane have a nightmare of Superman killing everyone, including herself and Lana Lang, in rather jovial fashion. For some reason Lana has been kidnapped and the search for her obviously takes Supes and Lois to Germany, because if anyone was going to kidnap a small time American reporter it was going to be the Third Reich under the influence of the Greek Gods. On the way, the duo are attacked by various Greek Mythological creatures and have a plane crash. All with me so far? Good because now things go bat**** insane.

Lois discovers that Adonis is the one ruling the roost in the Reich and Artemis and Athena are trying to kill him. Meanwhile Wonder Woman has betrayed the Amazons and is now part of the Nazi's because reasons. This leads to a fight between Germany and Greece which Germany obviously wins. This leads to Athena giving her power to Lois and making Lois the new, not Nazi, Wonder Woman.

Then, Circe shows up and transforms Superman into an evil centaur, which leads to arguably the best panel in comic book history. Brace yourselves, this is majestic in it's wondrous insanity.

Isn't that simultaneously both the best and worst thing you've ever seen in you entire life.

We also get Lana Lang imbued with the power of the Oracle Of Delphi, meaning she can now perform magic. Lana then tames Evil Centaur Superman, restores his mind and body to normal and then, because this story needed to have that little bit extra, she transforms him into a woman. I mean why not.

So, now Superwoman, who isn't super anymore either apparently, infiltrates a Minotaur guarded Reich building, so Wonder Lois can face of with FBB Nazi Woman and beat her with her magical lasso. Oh and then it's revealed that the whole thing was just a game of chess between Zeus and Hera using the world as chess pieces and everyone goes to live on the moon in one big polygamous relationship. The End.

Ok, excuse me for just one second. Right.

4 Responses to What Were They Thinking: I Wish They’d Destroyed This