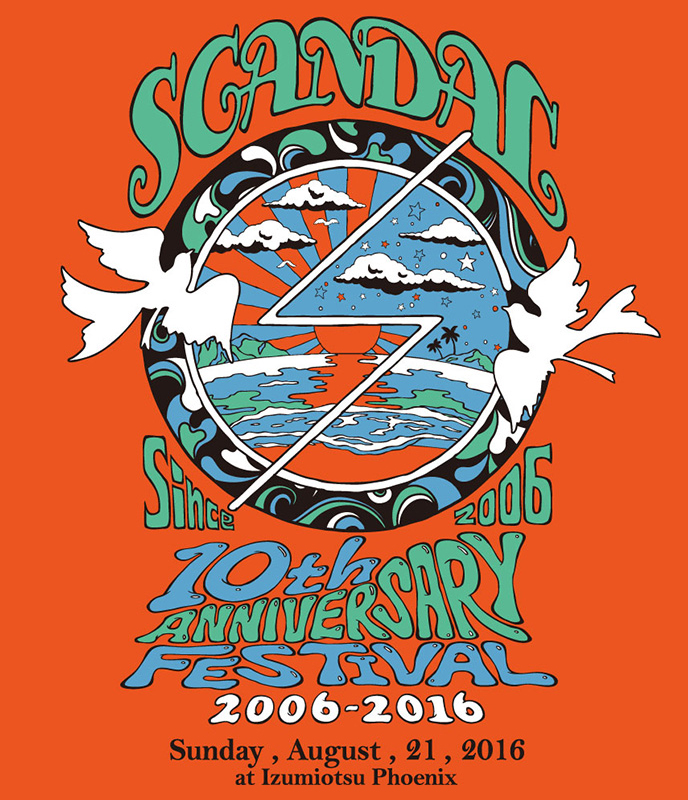 On this edition of Kaldath's Corner I am  going to write about something I have been longing to review since August but various things not the least of which being my illness had kept me from doing. Today I review that "10th Anniversary Festival" concert by my most favorite band on the planet, the J-Rock group SCANDAL.

This outdoor concert which was around 3 hours in length was held on August 21st at Izumiotsu Phoenix in the Osaka Prefecture of Japan. A concert that from the moment I heard about it I had wanted to attend, though I knew it was an impossibility for several reason, not the least of which my lack of fund to make a Trip from Jackson New Jersey in the US all the way to Osaka Japan. You can say I was disappointed that I had to miss out on this major event celebrating SCANDAL's 10 years of fabulous music, so when I learned that the concert had been broadcast live in Japan and that footage was available online I wasted no time in hunting it down and watching it, repeatedly!

Well this concert has just been released on Blueray and DVD, and though it isn't available in the United States at this time you can bet I will be buying a copy, and since it is out on video I figured now was a good time to review the show.  Also since the concert is now for sale I will not be linking to a video of the full concert but I will be linking a too footage of a few of the songs performed there.

Well let us start this review with the setlist of songs for the concert.

Now I will not lie, I am biased in favor of SCANDAL so this review may not be the most objective, however even I can admit there were a few issues with the show, the main one seem to be the fact that Haruna our lead vocalist seemed to have an off night for at least a 3rd of the show. She seemed very tired though that could have been due to the heat, considering is was about 100° F ( about 37° C ). At one point during the Song Shunkan Sentimental  (anime fans may recognize this song from Fullmetal Alchemist: Brotherhood ) Haruna was unable to continue singing and a combination of the crowd, Mami, and Tomomi had to finish it up.

Here is the same song, sung live at a different concert for comparison

After a short break for water, and some cool wet towels, Hurana was back in action but this is where the tiredness in her voice really began showing.

Another problem this concert had was that the band just didn't seem to have their usually level of polish on their performance. Not that they were horrible to listen to, far from it. No, it was just that they seem just the slightest bit off on their normal sound but again the heat, combined with a extra long concert as well as a very busy schedule leading up to this event are likely the culprits here as they did get better as the sun began to set.  Though I do have to say this lack of normal polish did have one benefit and that was with the song "Take Me Out"

Sometime ago I wrote a review of this song's official music video where I gave it a rating of 3.5 out of 5 stars, mainly because I found it a little too popish in its sound for my personal taste. Well the live performance here of that song had a much improved sound too it and I would upgrade the song to 4 stars based solely on this performance of it.  Though I have always thought the bands live performances are better then their studio work if I am honest.

Now despite the problems I listed above I found this concert highly enjoyable and even heard a few songs I never knew existed before seeing this show. Songs on the night for me where as follows:

Happy Birthday -  this is the first time I have seen this song preformed and have only ever heard the studio version off their Yellow album. Sung early in the concert because not only was it the Bands 10th Anniversary, it was also Drummer Rina's 25th birthday.

Scandal Baby - This song was my most favorite scandal song for a long time and still ranks up in the top 5, and I always love Tomomi's and Mami's harassment of Hurana during this song when performed live. It was performed here during the concerts encore.

and Last but certainly not least, this show stealing song of the evening in my opinion

Sayonara My Friend - In my opinion this is a 5 star killer performance of this SCANDAL song. It was powerful and full of emotion and THE BEST song of the night. and this song isn't even in my top 10 favorite scandal songs, but still it just stole the entire show.

Now as I said, I loved this concert though it is certainly not the best SCANDAL show I have seen, that titled would fall to their Perfect World Concert from somewhere around January 2016. My overall rating for this show would be  , hmmmm I'd say 4.25 stars out of 5. A solid show despite some obvious fatigue from the band. I still would have given almost anything to have been there live!!!!!