What Were They Thinking?: Earth(31) to Frank Miller

So, here on What Were They Thinking, the series where we take a look at the stupidest, most ill advised things the comic book industry has ever done, we talk a lot about "them", "them" being a blanket term for the faceless people upstairs in the publishing houses of Marvel and DC, the writers and artists who create the terrible stuff we cover and basically everyone who works there. We don't ever focus on individuals, I mean I haven't even slagged off Rob Liefeld on this series, even when I did it originally. However, today that is going to change, because we're talking about this bloke.

So, I highly doubt that anybody needs an introduction to Frank Miller. If you do, what are you doing on this site? He's the guy who made Daredevil relevant, he wrote Ronin, 300 and Sin City and was behind 2 of the top 5 best Batman stories of all time in Batman: Year One and The Dark Knight Returns. So why are we talking about him. Well, I present to you, the jury, my case as to why Frank Miller should be incarcerated in the WWTT jail for crimes against comic books, that is, unless the defendant would like to plead insanity because lord knows there's plenty of evidence to support that claim.

Now, I would like to present to the court exhibit a.

All-Star Batman and Robin The Boy Wonder wasn't Frank Millers return to the caped crusader, but it certainly was the most high profile comic he'd done with the character since Year One. But that isn't a good thing. Miller does not just portray a darker variation on the hero here, no. He did that in Returns. What he does here is turn Batman into a psychopath. Not a boarderline psychopath, an actual psychopath. One who is quite happy to throw molotovs at thugs, kidnap people and leave them in the trunk of a car whilst he goes of to have sex and he hospitalises his own girlfriend in pursuit of his mission as Batman. And then we come to Robin. His treatment of Dick Greyson is appalling. People joke about the old 40's and 50's comics needing child services involved, this series legitimately did. Not only does Batman kidnap the newly orphaned 12 year old, he leaves him in the Batcave without food and forcing him to eat rats and bats to survive. Then, Bruce gets mad when Alfred shows pity on the boy. This, this is not Batman. These aren't the actions of a hero, they're the actions of a monster. I decried Marvel last week for portraying Quicksilver and Scarlet Witch as incestuous and Hank Pym as a wife beater and still keeping them heroes. Miller managed to make Batman even more disgusting.

And it gets better. Miller's treatment of other heroes is just as bad in this series. Wonder Woman expresses the desire to kill Batman in cold blood because she disagrees with his methods, providing a nice bit of hypocrisy for you. Black Canary also does her fair share of burning people alive, as in, you know, setting fire to a person and watching them die. Heroes everyone. Oh and Batman and Robin both nearly kill Green Lantern, who seems to be the only reasonable "superhero" in this entire thing. Best thing is, someone at DC looked at this and thought, yes, this is how we would like one of our flagship characters to be portrayed, we should publish this. Mind you, it's not like there wasn't already form on that front, which brings me on to exhibit B. 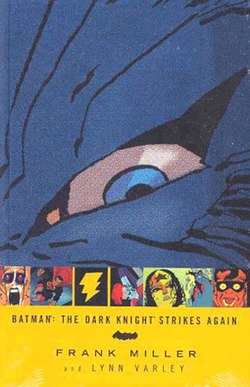 Rewinding the clock a few years, Frank Miller picked up where he had left off with The Dark Knight Returns, to give us the sequel that nobody wanted. Of course, we have the same dark take on the dark knight as we saw in the original, not yet as bad as Miller would get but still much grimmer than the mainstream version. So, what makes this stand out as a crime against comics? Well, apart from the fact the Martian Manhunter is a depowered tobacco and alcohol addict, Captain Marvel gets killed off, Elongated Man being a Viagra salesman (yes I am serious and yes I see the joke), Big Barda being a former porn-star then dictator of Ohio and Superman having a daughter who is a grade A b****. yeah apart from all of those reasons, the reason this is a crime against comics is, once again, its treatment of Dick Greyson. Frank Miller obviously does not like Robin. In this comic, Dick had been emotionally abused by his mentor (again) and fired from his role as Robin. He then turns to Lex Luthor and undergoes gene therapy to become a new, super-powered, version of The Joker, who can shape-shift and has a superhuman healing factor. Because of course, why not. None of it makes any sense, but when you're performing a character assassination on both Batman and Robin, why should you need to make sense.

Now I could stop there, but I'm not going to. Though, I am sure my first two pieces of evidence should be adequate to convince the jury to pass down a verdict of guilty, I have a few personal observations to make, should the court allow. My exhibit C in this trial, is the defendants treatment of women in his comics. Not withstanding the fact that he created one of the best strong female protagonists in the medium in Elektra (and then killed her off almost immediately) during his time on Daredevil, his representations of women have not been favourable over the years, particularly in his work on Batman. In both The Dark Knight Returns and Batman: year One, he portrays Catwoman (possibly the greatest female icon in comic book history behind Wonder Woman) as a prostitute, not a profession that is generally held in the highest regard nor considered a favourable way to represent women, though it is marginally better than her portrayal in All Star Batman And Robin The Boy Wonder, where she is only included in the story to be brutally beaten by the Joker and pretty much nothing else. As I covered briefly when discussing my first piece of evidence, Vicki Vale is included in All Star Batman as Bruce Waynes girlfriend, but he side-lines her as soon as the opportunity to be Batman arises and hospitalises her in the ensuing fight. And though he does organise medical aid for her when he finds out she was injured (he doesn't notice during the fight because he's the goddamn Batman), he sends Alfred to sort it out because he's too busy torturing a young boy and then as soon as the next woman shows up, he's getting into bed with her basically. That other woman being Black Canary, who is treated as pretty much a sex object. She shows up, looks pretty, fights some crime with Batman, they have a "romantic interlude" and then she doesn't appear again until the end of the series. I could do an entire article dissecting Frank Millers attitudes towards women in his comics, and his attitude towards homosexuals and Muslims as well for that matter, but I'll leave it by saying that when people who speak very highly of you, people who are purportedly your friends think that your work is misogynistic and homophobic (as Alan Moore has said of Frank Miller), you need to maybe tone it down a little.

And with that, the prosecution hopes that the jury sees the evidence that has been produced here and realises just how heinous these crimes truly are. No matter what good the defendant may have done in the past, we must ask the jury, in all good conscience, to find Frank Miller guilty of crimes against comic books. The prosecution rests.

This entry was posted in Comic Book Stuff, What Were They Thinking. Bookmark the permalink.

2 Responses to What Were They Thinking?: Earth(31) to Frank Miller