Hello everyone! Since Kaldath hasn't been feeling well as of late, I thought I would take over doing the Anime Talks for now. Just as a note, I shall be reviewing these animes based on their own merits, and not on how they follow the source material. After the break, my first review! 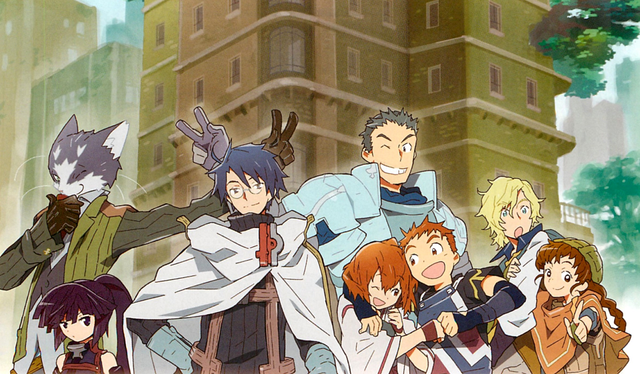 Log Horizon takes place in the MMO Elder Tales, where after the launch of its twelfth expansion Novasphere Pioneers thousands of players find themselves trapped in a world similar to the world of the MMO. This anime follows Shiroe, an experienced player of Elder Tales, and the inhabitants of the in-game city of Akihabara as they figure out how to live in this new world.

One of the things this anime does really well is use lots of mechanics and features found in many MMO's and show how the characters have to adapt to using them in an everyday life manner. Although there is a lot of exposition about how some of these mechanics and features work, it is usually put after one of the characters use said mechanic or feature, where it feels more like a plan is being explained afterwards to the watcher or characters not involved with the plan and less like an info dump.

Another thing this anime excels at is how it will focus on the effects that being trapped in a MMO will bring around. For example, for all of the players, like in most MMO's, death isn't permanent and has very few ill effects. Instead of just stating this and then just brushing it aside, this has a very noticeable effect on the characters' mentalities, causing many to start take part in killing other characters and leading to a major worry about public security that, rather be mentioned once and never be brought up again, it serves as the first problem that the main characters aim to solve and is solved in a rather logical way.

A third good thing about this anime is how it is able to keep tension throughout both the battle scenes and the political drama scenes. Both are presented as battles that must be won through strategy and wits, and that charging into either with little forethought can be almost suicidal. The fact that most of the times the main characters' plans are only hinted at before and only revealed to the viewer after their plan has been put into play causes the viewer to stay interested and ask questions about how the main characters are going to get themselves of the situations they are put into.

Honestly, I find very little fault with this anime, except for how there's a quite a bit of reading involved, and if you're watching it where it doesn't have the Japanese text translated, a lot of context is lost. Plus, for those who aren't familiar with some MMO concepts, getting into it can be pretty arduous. Another small warning is that it is not finished yet, and even the light novel it is based on is not complete yet.

View all posts by Linea24 →