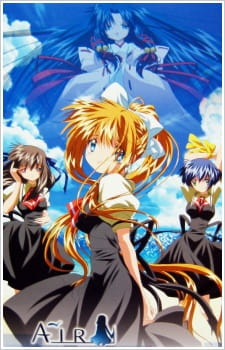 First I will give you a quick run down of what the show is about.

Air TV is a 12 episode series about Yukito Kunisaki a traveling puppeteer who is in search of a Winged Maiden in the sky. A mysterious being he learned of from tails his mother told him and whom she was obsessed with finding and helping. Yukito during his travels finds himself in a small coastal town where he meets an unusual girl named Misuzu. Originally not planning on staying long he ends up staying his Misuzu and her mother befriending some of the locals whom he decided to aid with their various problems putting his search for the winged maiden on hold, or so he thought.

I didn't find the animation to be anything specially though it wasn't bad either. Though I have to give credit where credit is due, there were a few well designed and animated scenes in he series, but over all I found it to be average

I personally found most of the characters to be well thought out and engaging. I found myself really caring for them and we saw some true character growth from many of them.

This is a category that is going to play very small role in determining the final outcome of my reviews, as I typically don't pay much attention to the music in anime and tend to skip open and ending credits. That being said the music used here was well suited to the story in my opinion and so I will give it a rating of ......

Let me start of by saying ..... OH MY GOD!!  The story in this anime had me hooked ... It starts off slow and does have a bit of a slower pace then I typically enjoy in my anime but there is just something about it that had me binge watch the entire 12 episodes in one night.  .... I will warn you though this show had me in tears a number of times! and I warn you now that when you watch episode 12 you better have a full box of tissues on hand.  It is hard to tell you much about the story without spoiling things for you all, but it is well worth a watch especially if you are a fan of romantic Shoujo anime with a bit more then just a touch of supernatural elements thrown in.

One Response to Anime Talk: Review of Air Tv