So entries went up by a staggering 50%!!! There were three this week. 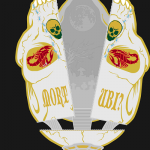 First up, HerrD with a creative and suitably creepy Goth take on the classic unfolding Faberge Egg. 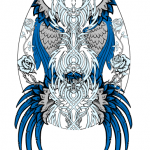 Keric offered up an intricate design with some classic tattoo touches. Don't know if they were going for an Ed Hardy vibe, but that is what struck me. 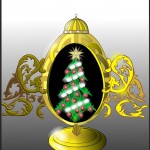 And Cliff created a classic Faberge motif with the filigree doors and Christmas scene inside.

While I definitely appreciate the creativity of both HerrD's and Keric's entries, this week's top spot goes to Cliff. While very traditional, it is beautifully detailed and elegant.

Join me in congratulating Cliff, and the other entrants...too numerous to name.

See you Saturday as the Pop Quizzes of Christmas continue.

This entry was posted in Pop Quiz. Bookmark the permalink.