JReviews: Doctor Who Series 9 Episode 4- Before The Flood 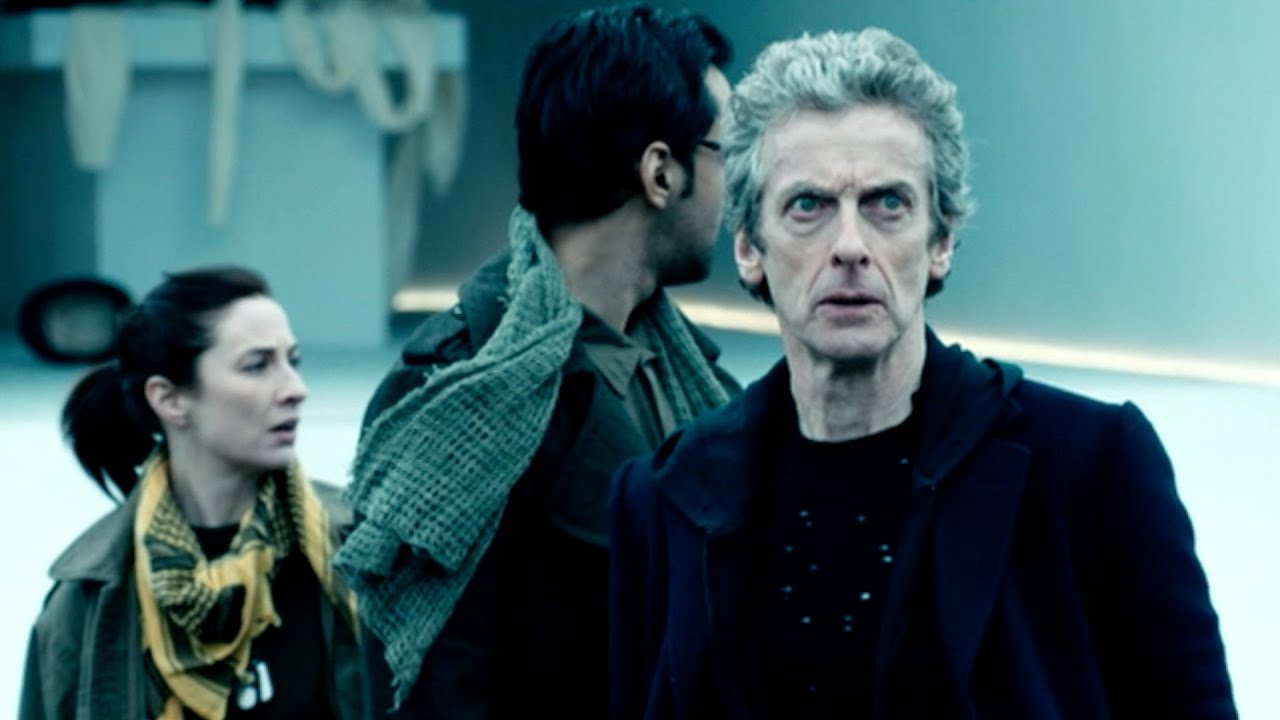 So, the end of our second two parter of the series, technically the second full episode of the series (I see what you did there BBC, full length series for half the budget, nice). So, does it keep the high standards up that the previous three episodes have?

In a word, kinda. I honestly don't know what to make of this episode. It was good, don't get me wrong, but it wasn't what I expected and overall it was a bit of a mess.

So, episode starts out with an overly cryptic pre-credits scene that is obviously hinting at how the episode is going to play out, in a way that only Doctor Who can (i.e. it makes absolutely no sense what-so-ever until the last 2 minutes of the episode) and then goes into a guitar bolstered version of the intro, which I loved, but was really just an excuse for Peter Capaldi to show off again with a guitar. Then we get obvious spoilers for future episodes, some fan-girling and then the first of two obvious play-offs. Ok, so there's a dead alien warlord in the spaceship that will have the hypnotic writing in it, and he's the only character we haven't seen yet. So it's obvious he's a) not dead and b) the guy behind it all. Big points on the subtlety and originality guys *no sarcasm at all sarcasm*.

And then we pop back to the future (sans DeLorean) for a quick phone chat between Clara and the Doctor. And of course, after me saying nice things about Clara for the last three weeks… God almighty I really did want her to end up as a ghost. That phone conversation could not have made Clara come out worse. Yes, we get that you like travelling around with the Doctor and that you don't want him to die, and yes I get that this is meant to be relatable for people who have lost someone, but honestly it just came off as brattish, childish, whiny and, above all, pathetically and aggravatingly selfish. Yes, of course you can just depend that someone doesn't die and they will of course go out of their way to do so even if it is completely and utterly impossible, because that is how life works isn't it. NOPE!! Sorry kids but it don't work like that. I know that this entire rant is rendered moot by events later on in the episode, but I.M.O this was one of the most poorly written scenes in the franchise so far, and pissed me off to such an extent that I have gone on about it for this long already because off how bad it was. I'm sorry but I'm done with Clara, really.

Anyway, then the "obviously not dead" dead guy wakes up, kills the cowardly alien guy (who was just the right amount of annoying to actually sell the character) and then after one of the worst instances of splitting up ever, kills of the fangirl. Why split up? Well, otherwise they couldn't kill her off. And that begs the question, she died 150 years before the events in the future, so why wasn't her ghost there in the beginning like the alien guy? Because if the pay off at the end that wraps it all up is to be believed, she should have been, even though the Doctor hadn't taken her back in time yet…

At this point I would like to say that at this point this episode starts to look an awful lot like the episode "Fathers Day" from the first series with Christopher Eccleston in tone, about how you can't change the past because what's happened has happened, only that episode was better I.M.O, because it was more emotional and it hit harder with the feels. But then differences start to happen later on that separate the two, but they broadly run the same trope.

Anyway, in the past we now have the Doctor go off to face the Fisher King, who looks awesome by the way, whilst the guys in the future decide to split up. Ok, the interpreter guy going off to get Clara's stolen phone makes sense, as he can't be hurt by the ghosts as he hasn't seen the symbols and they need the phone to contact the Doctor (which never happens, so they don't need it, but it's always nice to have a contingency plan). But for the girls to randomly separate whilst looking for him was just plain stupid, although it did tease at Clara getting offed, which was disappointing when it didn't happen. We then learn that the deaf girl can use vibrations in the ground as echolocation or some thing like that (it kinda makes sense, the visuals are pretty neat, but again, what?) and it's back to the past for a nice chat about the laws of time and life and death. Now honestly, this scene actually is pretty good, but the Davros scenes were better. And at this point, I'm still pissed of that Clara hasn't died so...

So, to recap, so far this episode has been solid, apart from Clara, but certainly not what I expected after last episode. I've no idea what I expected, but it wasn't this. But now it takes a nose dive.

So, the Doctor declares that he's removed the signal from his mind and erased it from the wall of the ship and, rather than killing him, the Fisher King goes outside to investigate. `when he discovers that the Doctor has lied (which is rule 1 of Doctor Who, didn't he read River Song's book?) and that one of the power cells is missing, he just stands there in a "Come At Me Bro" pose whilst the dam blows up and he's washed away by a tidal wave. Now at this point, we're meant to have no idea what happened to the Doctor, except this is the second obvious play-off and we all know that the Doctor has got inside the coffin and set the alarm for a 150 year nap. Then when he wakes up, he uses the sonic sunglasses (lame) to transmit the sound of the Fisher King from his own ghost, which is actually a hologram, to lure all of the other ghosts into the room the ghosts can't get in or out of, and uses said sunglasses (lame) to erase the signal from everyone else's memories. Anyone see where this is going?

So, final scene, the Doctor and Clara back in the TARDIS, everything's all happy with the Doctor explaining how clever he was and everything, and he poses us with the same question as we had at the start of the episode (you need to watch the episode, because it's too confusing for me to properly explain in a concise and understandable way). I'll give the writers points for this, it was a very clever way of getting away with a Deus Ex Machina moment, but a Deus Ex Machina it was none-the-less. They pulled that solution out of there arses because they realised they wouldn't have time to satisfactorily wrap the story up.

So now you guys can see why I'm torn on this episode. It's really flawed, but it was entertaining as well and Peter Capaldi was on form again. He has certainly improved since last series. But neither was really prominent enough during the episode to cancel out the other. Sitting down afterwards to write this, all I can pick out was what was wrong with the episode, but that doesn't mean it was bad because during the episode I did really enjoy it (except for Clara that is *angry face*). If I were doing ratings it would be a 3/5, which is unfortunate because the last 3 have been 5's. They were trying to be too clever for their own good I think.

But it's Doctor Who, deal with it.

Anyway, that's just my opinion. What do you guys think?

4 Responses to JReviews: Doctor Who Series 9 Episode 4- Before The Flood