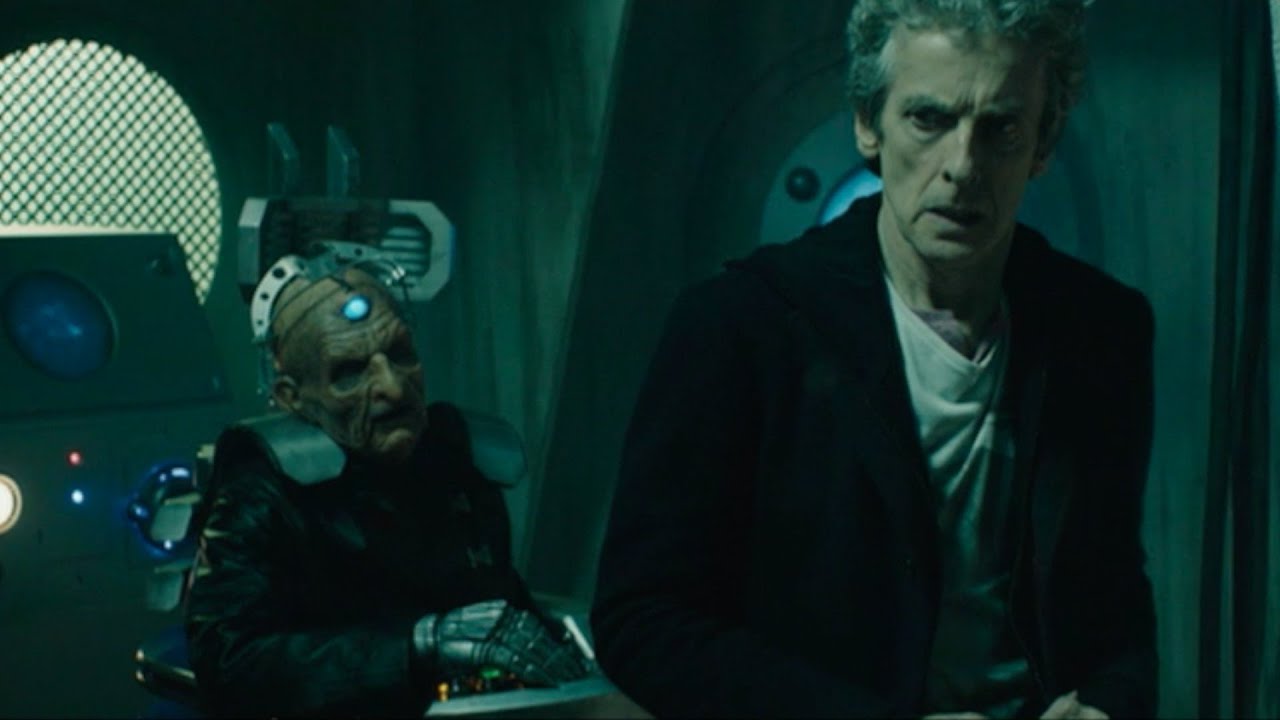 Hello, hey, yeah, sorry, shoulda had this up yesterday and all that, but sorta got side tracked by a little thing called The Rugby World Cup (I'm English and it was the England Wales game, kinda a big thing you know). Anyway, that's all done with, got a review, here it is.

And we kick off with the most predictable thing imaginable. Clara Oswald hanging upside down from a rock whilst Missy sharpens a small stick with a stone. I mean it was obvious wasn't it?  I mean of course Missy is going to be hungry and why not eat Clara if you can't find any food, makes perfect sense right. Oh but wait, weren't the meant to have been exterminated at the climax of the last episode. Yeah, that wasn't going to happen when you can have a stupidly implausible escape plan that is so unworkable and preposterous that it couldn't possibly fail at all ever. I mean, if this is how the series is going to from here on out…. I'm totally down for it. Also, interesting to note that Missy and Clara have much better chemistry with each other throughout this episode than either of them have had with the Doctor at all in either episode or in the previous series.

And now that that is over with, we get onto the serious stuff, like how cool it was to see the Doctor just rolling around in Davros' chair. And how perfect the dodges joke was. And of course, what better way to make a point after surviving being exterminated by every Dalek in the room than to pull out a completely incomprehensible cup of tea and proceed to drink it. He's the Doctor, deal with it.

And then we're back to Missy and Clara in possibly the most disgusting new revelation about Dalek physiology, the fact that they literally liquify as they age, but don't die. Hence, they get flushed down to the sewers to live out their rage filled lives as, lets be honest, stuff that looks like what you would usually find in sewers a.k.a s..

Moving on, why the hell did the Daleks keep a chair lying around?

The whole trap with the cables was very nicely played. I thought that Davros was going to try to entice the Doctor into committing genocide, so that the snake guy could attack him i.e. proving Davros right whilst coming back to bite the Doctor quite literally. But no, what we got instead were two wonderful scenes between the Doctor and Davros, wonderfully acted by Julian Bleach, which really made you feel for one of the Doctors worst enemies and gave Davros a whole other side. And that made the inevitable betrayal even better. All I can say is, Capladi's Doctor and Davros play off each other so well, they could have just made that the episode and it would have been better than the whole last series.

Of course we have to talk about the Clar-lek. That scene was hilarious and a very nice study of Dalek programming and psychology. The creature was removed from the casing, but the casing still acted Dalek even with Clara inside. So is it the casing programmed to be evil or are the mutants that bad anyway and the casing just amplifies it. Probably the later, but the scene was decent.

And of course the Doctor knew what Davros was up to. He's the Doctor, deal with it. You have a plan that has two different traps in it, he'll have three different ways to get out of them, thought hopefully none as bad as being consumed by liquified s.. Moving on, of course Missy would also try to get Clara killed, and by the Doctor, because that's what she does. And of course she'd have a brilliant idea of how to escape certain extermination that we of course don't see executed. It's Doctor Who, deal with it. That is the new tag line for these reviews, deal with it.

And on that note, the sonic glasses are easily the most stupid, hateful and pointless thing ever to exist in the whole of forever and if the rest of this season is  as good as these two episodes it will probably totally redeem last series and be up there with David Tennant's third series and Matt Smith's second as the best series this show has had since it was rebooted. But of course, we'll have to wait until next week to find that out. Unless you have a TARDIS or vortex manipulator, in which case, you already know the quality of the rest of the series.

And on that note, I think that's all for this week, deal with it.

6 Responses to JReviews: Doctor Who Series 9 Episode 2- The Witch’s Familiar