Ok, that title's wrong for a start. Because, as very occasionally happens in these polls, this week ended with a draw. It was very close between the top three all week (and our third place entrant only finished three votes adrift) but one single last minute vote was enough to take this from being an outright win to a shared one. And the people who are sharing this win are GuyGenesis, for his Android, and Legatus, for his Father Fusion. Nice one guys, I'll let you decide between you what you're going to do about the prize, and well done to everyone else who entered, it was a great contest. 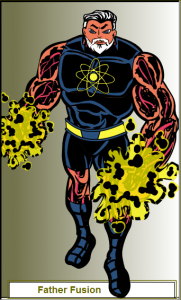