Oh dear, JR's been going through old blog posts again and has decided to do another one off Big Question.

So yeah, I was going through some of the old Big Questions and I stumbled across one of the earliest ones I did (think it was number 9 or something) where I asked what peoples first comic book experience was, and whilst reading through some of the replies I saw a comment by Niall Mor where, near the end of his comment, he started to talk about how he started out with Heromachine. So that's this weeks Question, because I'm genuinely interested and I know that everyone here has a story here, otherwise you wouldn't be reading this. So, how did you discover this website? How did you become part of the Heromachine Community family? Tell us your Heromachine story.

Personally, I started out with Heromachine 2 in, I think it was around 2006. I was bored whilst staying down at my Grandparents house one day and I started messing about on their computer. I can't remember what exactly lead me to the site, but I probably searched "Create A Superhero" in google and this site was the first thing that came up. I dutifully set about creating my own comic book fantasy world, full of characters either myself or my friends (who all loved this new toy I'd discovered) had thought up with our twelve/ thirteen year old brains. I was quite happy just messing around with the basics for a while, until the 2.5 update. Around then I stumbled across a collection of other Heromachine art. I think it was still on the site, it must have been on the blog or the forums but it blew my mind. There was stuff there that I didn't know was possible to do, it was the first time I saw any of the alternate skins or monster bodies, I remember seeing one female character that had a transparent 1st skin colour with a purple 2nd colour and I basically went and memorised every aspect of that character and went into the program and rebuilt it. I can even visualise it today. That got me into actually experimenting with the program, although this kinda slowed when the other versions of the program where introduced (Modern Warrior Creator, then HM3). Then it was just translating my 2.5 characters into 3 with my very limited skills at the time. It took me a few years before I looked properly at the blog, I focused again solely on my own little world on the program its self. But then, for some reason I took a look and, as with the previous time I ventured away into the unknown depths of the site, I discovered wonders. I found the contests and through those the art of AMS, DiCicatriz, Anarchangel (I have to say guys, you have no idea how many of your characters I tried and failed to recreate the way I did with the transparent girl) Kaldath, Asder,  Zyp and SeanDavidRoss. I discovered that there was a whole community built around this program and there were people out there doing this amazing work with this thing that I was barely scratching the surface of. And you know what I did? I turned round and said "I'm gonna try and beat them." God, if you look back at my first contest entry, I was such an idiot. I didn't stand a chance and not only because I didn't name my entry correctly. It didn't take me long to realise that I could do better, so I ended up on deviantart, where, once again, I started look at how other people were using Heromachine, in specific; AMS. I started trying to copy his style and whilst I didn't fail spectacularly, it's safe to say, I was no AMS. Thankfully, he humoured me and gave me some advice on shading and how to improve my art. Shortly after that I got up the confidence to join the forums, which was actually because I wanted a bit of help on a picture and Jeff told me to go to the forums newly opened "How Do I?" section. A few days later I started up my thread and the rest, as they say, is history.

So yeah, that's how I got started on Heromachine and how I got into the community. So now it's over to you.

Oh and if anyone's interested, I still have that first Heromachine picture that I made round my Grandparents all those years ago. I know it's terrible, but I was thirteen (maybe twelve, I can't exactly remember the date). I think his name was The Eagle or something like that. 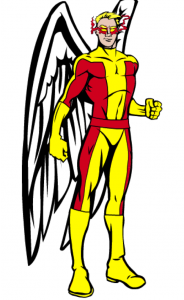 25 Responses to The Big Question ♯26