Now, some of you may remember back in the summer, I ran this series called "The Big Question" here on the blog, where I'd give you guys a topic, give my thoughts on it and then let you guys discuss it. It got dropped by the wayside because I ran out of topics that really interested me, but recently I've been going back through them and something sparked my interest. It was one of the earliest BQ's, on the topic of why Batman is so popular. Some of the answers I got were very thought provoking, so I started wondering, what about other characters. So that's what we're going to be doing over the next few weeks. Discussing the reasons for the popularity of two of the greatest and most popular superheroes in existence. Starting with this guy. 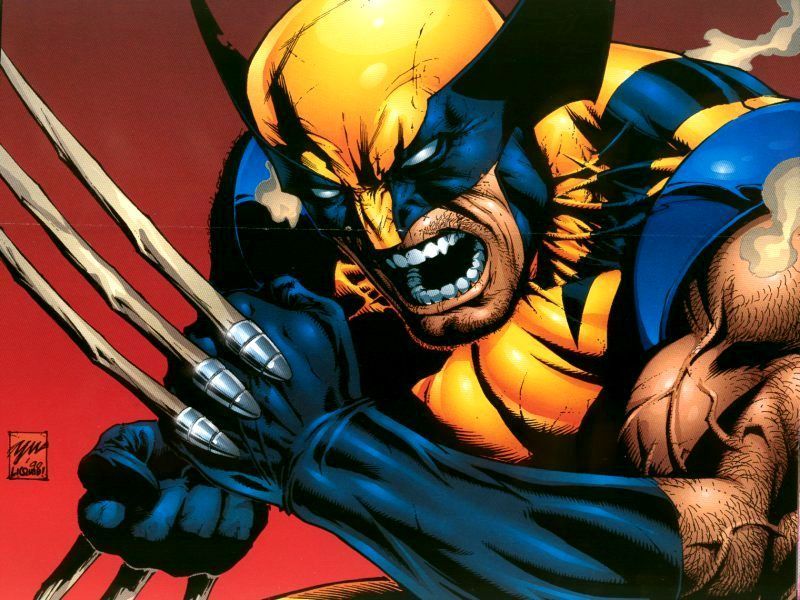 Now, lets get this out of the way at the top, I don't actually care that much about Wolverine, so shoot me. There are X-Men characters I like more (Nightcrawler, Beast, Shadowcat and Angel to name a few) and ok at least he isn't as bad as Cyclops, but he has a tendency to be incredibly stupid at times. As far as I can tell his popularity comes down really to one thing, violence.

Now, this can be split into three categories, his attitude, his powers and his claws, but it still boils down to the fact that he is the most violent mainstream comics book character that is actually considered a hero, rather than a vigilante (i.e. Punisher).  And this is appealing to that little part of a guys brain (and I'm sorry to be sexist, but this is something that is predominantly a guy thing) that wants to be a soldier as a kid (or as a adult, if you are or have been in the military), that as a child makes a toilet roll tube or a stick a sword/ gun to a young boys mind, and lets be honest guys, we never really grow up do we? We may age, get jobs, have families etc. but inside we're all still children. And before you start to argue, may I just remind you, you are currently on a website, the primary function of which is to allow you to create and dress up a superhero. That is something my mother would describe as "childish". And there's not anything wrong with being childish. But it does at least give us a small insight into why Wolverine is so popular in my opinion.

Now lets look at those three factors a little closer shall we. Wolverine is considered one of the great originals in comics because of all the rip off's that followed in his wake (Sabretooth, Deadpool, Lobo, countless characters from Image Comics), but if you look closer, he isn't that original himself. The attitude is taken straight from Batman (especially pre-Robin and early 70's Batman) and given that little twist of amnesia to give him a decent reason to be brooding and miserable without resorting to the lost family story. Next we have his powers, or more specifically his most noteworthy power, his healing factor. We all know superheroes don't get hurt in the same way normal people do, they heal way too quickly or don't even get hurt at all in some cases, I mean how the hell do people like Captain America, Batman or Spider-Man keep going after all of the beat downs they've had if they got hurt and healed like a normal human being? So Wolverine is just taking this to the logical next level, showing us a character whose whole shtick is that he doesn't heal like a normal person, takes our minds off of the fact that none of them do, because now we have the extreme. Plus it allows for him to be put through impossibly painful and violent experiences (culminating in him being thrown into the sun and surviving) without people getting angry at what they're seeing because, hey, he's always fine at the end of it. Finally, we get to the cherry on the top, his claws, and by extension, his adimantium skeleton. So, we take an invincible, super-healing character and make him more invincible by lacing his body with an indestructible metal, therefore making him doubly unkillable, because that is badass. Luckily this also acts as his kryptonite, because he's on a team whose main enemy can manipulate magnetism, because otherwise Wolverine would just be boring and predictable, right? But the fact, he's a superhero and also carries weapons just adds awesome doesn't it? It's not like Daredevil had been carrying nun chucks since the 60's (those things aren't to be laughed at) or that a few months prior, Marvel had introduced another weapon wielding anti-hero type character who manages to be much more threatening than Logan ever was, Punisher. And lets be honest, both of these guys are shoot first, ask questions later type characters, which had been done to death in westerns (movies, tv and comics) long before the 70's had come around.

Anyway, that's my piece (as rubbish as it was), now it's over to you. Why do you think Wolverine is so popular?

Next week we'll have a look at my favourite character (it'll be fun trying to write the counter-arguement against him); Spider-Man. See ya then.

18 Responses to The Big Question ♯23