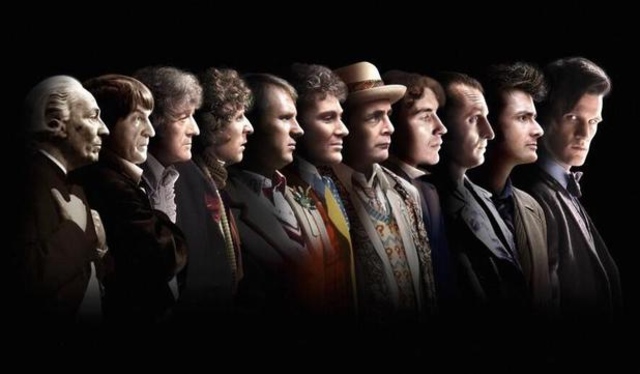 So, it's finally happened. After I don't know how many months of teasing us, we've finally got to see the grand celebration. And of course, considering I reviewed the last series after it had finished, I shall now go on to review the 50th anniversary, including all the special programs that I watched. I will apologise in advance, I've just come off of watching it so, yeah. Also will contain spoilers.

Kicking off with The Night Of The Doctor. This was genius on the part of the BBC, not to publicise it until literally an hour or so before it was released. That really got my attention. Though, word to the wise, not a good idea to watch it in the middle of a uni cafe, I got some weird looks for fan-boying over the return of Paul McGann. I was so happy they did that, considering how he is as much the forgotten Doctor as John Hurt, only they didn't have to retroactively paste him in. And we got to see the end of his Doctor, with a few nice nods to past Doctor Who stories (the Sisterhood of Karn) and non-tv aspects of the series (the list of 8th Doctors companions from the audio books that he recites). All in all a pretty tasty taster of what was to come.

Next up, Brian Cox's Science Of Doctor Who. I personally like Brian Cox and I can understand at least half of what he's talking about so I did enjoy this. The skits between Cox and Smith that happened between questions were quite amusing, but kind of detracted from the science a bit in my opinion, because that was what I wanted to watch. But try and explain his theory on The Eye Of Harmony and how you can use a black hole to warp space and time to your parents as I tried the next day. Not easy. So, this one wasn't for everyone.

The countdown of the greatest villains of Doctor Who, in my opinion, was just a waste of time. It was heavily biased towards the current run (why else would the Judoon be on the list) at the expense of some pretty decent older villains. The outcome was predictable, as you would expect (you could guess the top 3 before it started, and I did), but my biggest problem with this series was the guy they got to present the start bits. Could he have been more annoying. Probably not.

Doctor Who: The Ultimate Guide was fairly interesting. Didn't like the opening and closing skits with Smith and Coleman, they felt like they where just shoe-horned in for no other reason than they could. But I have no complaints about the actual show. 2 hours of Who history, fine with me. It was nice to hear the side of some of the actors on their parts (Colin Baker especially, considering his Doctor and his regeneration trauma scenes, which they covered during the show).

However, the shinning star of the build up was, for me, An Adventure In Space And Time. Mark Gatiss, you sir are a genius. They couldn't really have had the 50th anniversary without taking a look back at how it all began and they pulled it off wonderfully. The casting was excellent, but I have to acknowledge the true class of David Bradley throughout the entire show. His performance as WIlliam Hartnell was excellent (probably helped by the great resemblance, it actually felt like it was Hartnell himself at points), he really caught the gruff yet warm character Hartnell brought to the Doctor. Plus he gave the two most brilliant moments of the entire thing, the "Go forward in your beliefs" speech (which was already one of Hartnell's finest moments as the Doctor) and the scenes where he is informed they are replacing him and after, where he really puts across the deep sadness and confusion, culminating in the tear-wrenching "I don't want to go", a line taken straight from David Tennant's last moments as the Doctor. And then they followed it up with a touching tribute to the first Doctor and then repeated the first 4 episodes over on BBC 4. Well played BBC, well played.

And then finally, we reach the big one. The actual episode. And for me, it started out very muddled, as I assume was the intention. I got a nice chill from the mention of the Fall of Arcadia (something mentioned by Tennant's Doctor in the season 3 finale episodes, which was a nice touch). Also a nice touch was having the opening mimic the 1st ever episode, with the original title sequence and return to the school where Susan Foreman and her teachers were originally introduced. However, the constant jumping around did jar a bit, even by Doctor Who standards. But once the 3 Doctors were finally together, the episode really took off. The dungeon scene was very good, there was a nice frictional chemistry between the Doctors and it was interesting to see just how each of the Doctors reacted to the situation. As good as it was to see the Zygons, they weren't actually that threatening. Plus the Elizabeth the First thing was…. strange, and could have been handled better (the whole thing about her pretending to be a Zygon to find out the Zygons plan just didn't ring true to me and seemed a bit throw away). I personally was hoping for a bit more Dalek action, but I guess you can't have everything. The climax was unexpected and opens up a whole raft of new things for the coming seasons, but does call into question a few things, specifically David Tennant's last 2 episodes. We know that Gallifrey in the last moments of the Time War was quantum locked, that is obviously what the Doctors did at the end, but if the Doctor won't remember doing that, how can he know, unless he was planning to quantum lock Gallifrey after using the moment anyway? Or maybe I'm just over thinking it. Either way, liked the end, using all of the Doctors (and I mean all of them, although I don't recall seeing footage of Eccleston), would have liked it better if they'd have stuck with Hurt's regeneration until it was actually complete. However, I completely lost it when Tom Baker turned up. I haven't squeed so much in my entire life. Thank you Steven Moffat for that most amazing moment of Matt Smith and Tom Baker.

All in all, pretty damn decent celebration. Here's to the next 50. And the Christmas Special. Capaldi is coming.