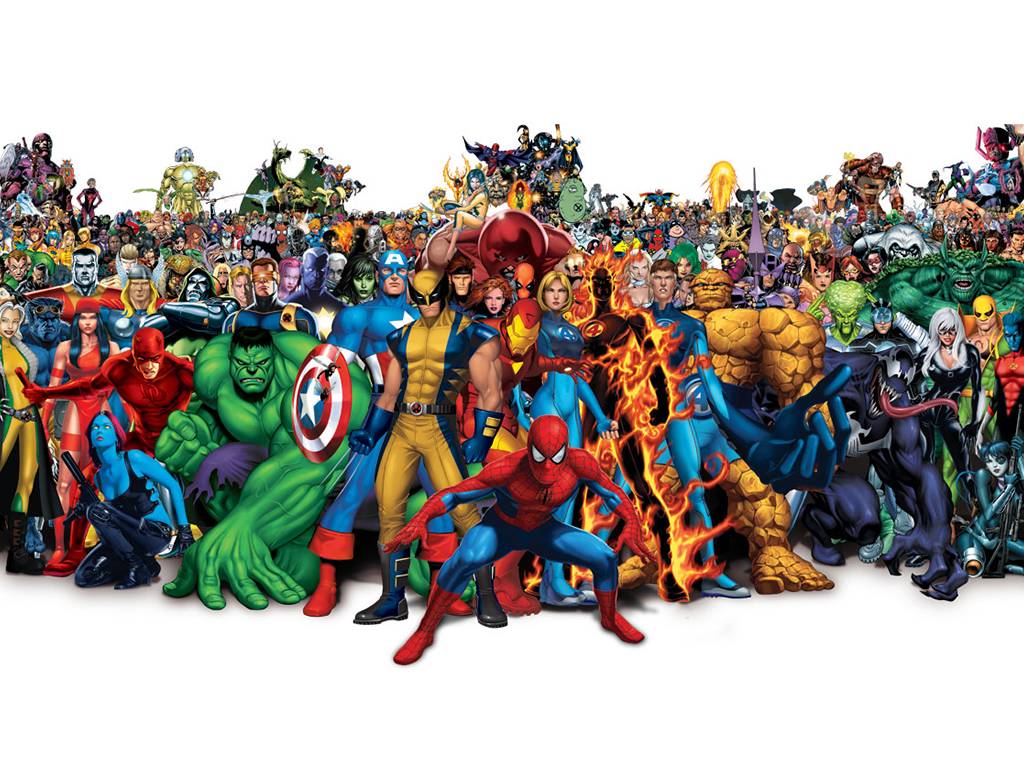 Welcome to another edition of Poll Postition! This Week I ask you to vote on the following Question: "If you were a Superheroes Which of these Super Groups would you belong to?" ( Team Descriptions after the jump! ) The first team of superheroes in comic book history, the Justice Society of America, or JSA, is a DC Comics superhero group conceived by editor Sheldon Mayer and writer Gardner Fox. The JSA first appeared in All Star Comics #3 (Winter 1940).

Unlike subsequent "all-star" teams, the JSA was limited to heroes appearing in comic strips in anthology titles, but not at the time featured as the stars of their own comic books, because the publisher wanted to bring attention to lesser known characters. Therefore, Superman and Batman were only honorary members and Flash and Green Lantern's early tenures were brief, ending when each character was awarded his own comic book series. However, a 1944 change in policy allowed them back into the group. Other popular members were Hawkman, the Spectre, Hourman, Doctor Fate and the Atom.
The team was popular throughout the 1940s, but with the arrival of the new decade, superheroes' cultural prominence began to fade. The JSA's adventures ceased with issue 57 of the title (Feb-Mar 1951) and All Star Comics became All-Star Western. JSA members remained absent from comics until 10 years later, when the original (Jay Garrick) Flash appeared in The Flash #123 (September 1961).
During the Silver Age, DC Comics reinvented several popular Justice Society members and banded many of them together in the Justice League of America. However, instead of just replacing JSA, the publishers announced that the team existed on "Earth-Two" and the Justice League on "Earth-One". This allowed for annual, cross-dimensional team-ups of the teams, lasting from 1963 until 1985. It also allowed for new series, such as All-Star Squadron, Infinity, Inc. and a new All-Star Comics, which featured the JSA, their children and their heirs. These series explored the issues of aging, generational differences and contrasts between the Golden Age and subsequent eras.
In the 1985 Crisis on Infinite Earths maxi-series, the series merged all of the company's various alternate realities into one, placing the JSA as World War II-era predecessors to the company's modern characters. A few unsuccessful and often controversial revivals were attempted, until a new series, titled JSA, was launched in 1999 and continued through July 2006. A new Justice Society of America series launched in December 2006, coinciding with the new Justice League of America series, also launched in 2006. The title ended in August 2011, with issue 54, as part of DC Comics' September 2011 reboot of its DC Universe properties. The team is slated to reappear in the Earth 2 ongoing series that was launched in May 2012 The Avengers is a team of superheroes, appearing in comic books published by Marvel Comics. The team made its debut in The Avengers #1 (Sept. 1963), created by writer-editor Stan Lee and artist/co-plotter Jack Kirby, following the trend of super-hero teams after the success of DC Comics' Justice League of America.[1] Labeled Earth's Mightiest Heroes, the Avengers originally consisted of Iron Man, Ant-Man, the Wasp, Thor, and the Hulk. The original Captain America was discovered, trapped in ice (issue #4), and joined the group after they revived him. A rotating roster became a hallmark, although one theme remained consistent: the Avengers fight "the foes no single superhero can withstand." The team, famous for its battle cry of "Avengers Assemble!", has featured humans, mutants, robots, aliens, supernatural beings, and even former villains.
The 2012 live-action feature film Marvel's The Avengers, directed by Joss Whedon, set numerous records during its box office run, including the biggest opening debut in North America, with a weekend gross of $207.4 million.[2] A second Avengers film titled The Avengers: Age of Ultron is set for release on May, 1 2015.

The X-Men are a team of mutant superheroes in the Marvel Universe. They were created by writer Stan Lee and artist Jack Kirby, and first appeared in The X-Men #1 (September 1963). The basic concept of the X-Men is that under a cloud of increasing anti-mutant sentiment, Professor Xavier created a haven at his Westchester mansion to train young mutants to use their powers for the benefit of humanity, and to prove mutants can be heroes.[1] Xavier recruited Cyclops, Iceman, Angel, Beast, and Marvel Girl, calling them "X-Men" because they possess special powers due to their possession of the "X-gene," a gene which normal humans lack and which gives mutants their abilities. Early on, however, the "X" in X-Men stood for "extra" power which normal humans lacked. It was also alluded to that mutations occurred as a result of radiation exposure.
The first issue also introduced the team's archenemy, Magneto, who would continue to battle the X-Men for decades throughout the comic's history, both on his own and with his Brotherhood of Mutants (introduced in issue #4). The X-Men universe also includes such notable heroes as Wolverine, Storm, Colossus, Nightcrawler, Rogue, and Shadowcat. Besides the Brotherhood of Mutants, other villains that the X-Men have fought include the Sentinels, Apocalypse, Mister Sinister, the Marauders, the Hellfire Club, and the Purifiers.
The X-Men comics have been adapted into other media, including animated television series, video games, and a commercially successful series of films. The Legion Of Superheroes

The Legion of Super-Heroes is a fictional superhero team in the 30th and 31st centuries of the DC Comics Universe. The team first appears in Adventure Comics #247 (April 1958), and was created by Otto Binder and Al Plastino.
Initially, the team was closely associated with the original Superboy (Superman when he was a teenager), and was first portrayed as a group of time travelers who frequently visited him. In later years, the Legion's origin and back story were fleshed out, and the group was given prominence on par with Superboy's in a monthly comic. Eventually, Superboy was removed altogether, except as an occasional guest star.
The team has undergone two major reboots during its publication. The original version was replaced with a new rebooted version following the events of "Zero Hour" in 1994 and another rebooted team was introduced in 2004. A fourth version of the team, nearly identical to the original version, was introduced in 2007. The Teen Titans, also known as the New Teen Titans, New Titans, or simply the Titans, is a fictional superhero team appearing in comic books published by DC Comics, often in an eponymous monthly series. As the group's name suggests, its membership is usually composed of teenaged superheroes.
The first incarnation of the team unofficially debuted in The Brave and the Bold #54 (1964) as a "junior Justice League" featuring Robin (Dick Grayson), Kid Flash (Wally West), and Aqualad, the sidekicks of Justice League members Batman, the Flash, and Aquaman, respectively. The group then made its first appearance under the name "Teen Titans" in The Brave and the Bold #60, joined by Wonder Girl (Donna Troy), the younger sister of Wonder Woman.[1] Green Arrow's sidekick, Speedy (Roy Harper), later took Aqualad's place in the lineup.
While only reaching modest success with its original incarnation, the series became a hit with its 1980s revival,[2][3] under the stewardship of writer Marv Wolfman and artist George Pérez. In 1980, the two relaunched the team as The New Teen Titans, aging the characters to young adulthood. Original members Robin, Wonder Girl, and Kid Flash were joined by new characters Cyborg, Starfire, and Raven, as well as the former Doom Patrol member Beast Boy, now using the name Changeling. The New Teen Titans had several encounters with the original Titans of Greek mythology, particularly Hyperion. The series was retitled Tales of the Teen Titans with issue #41 (April 1984), while a second volume of New Teen Titans launched in August 1984 with a new #1. Pérez left in 1985 to headline the DC Comics 50th Anniversary limited series Crisis on Infinite Earths. Tales of the Teen Titans was canceled in July 1988 with #91. The New Teen Titans Volume 2 was retitled simply The New Titans in December 1988 (issue #50), and was ultimately canceled in February 1996 after 130 issues.
The series was relaunched as Teen Titans in October 1996, with a roster of all-new members under the mentorship of the Atom (Ray Palmer), who had been De-aged to his teenage years; the series ended in September 1998 after 24 issues. A three-issue limited series titled JLA/The Titans: The Technis Imperative (December 1998-February 1999) led to the March 1999 debut of The Titans, a series featuring select Titans from all of the group's incarnations that ran for 50 issues until April 2003. A new regular series titled Teen Titans began in September 2003, featuring Cyborg, Starfire, Beast Boy, and Raven of the 1980s group joined by new teenaged versions of Robin (Tim Drake), Wonder Girl (Cassie Sandsmark), and Kid Flash (Bart Allen), as well as the Superman clone Superboy (Kon-El). By 2006, the team consisted of only the younger members and some new additions, and a concurrent series titled Titans debuted in April 2008 featuring some of the Titans from the original and 1980s rosters, such as Nightwing, Troia, Flash (Wally West), Tempest, Arsenal, Cyborg, Beast Boy, and Raven. 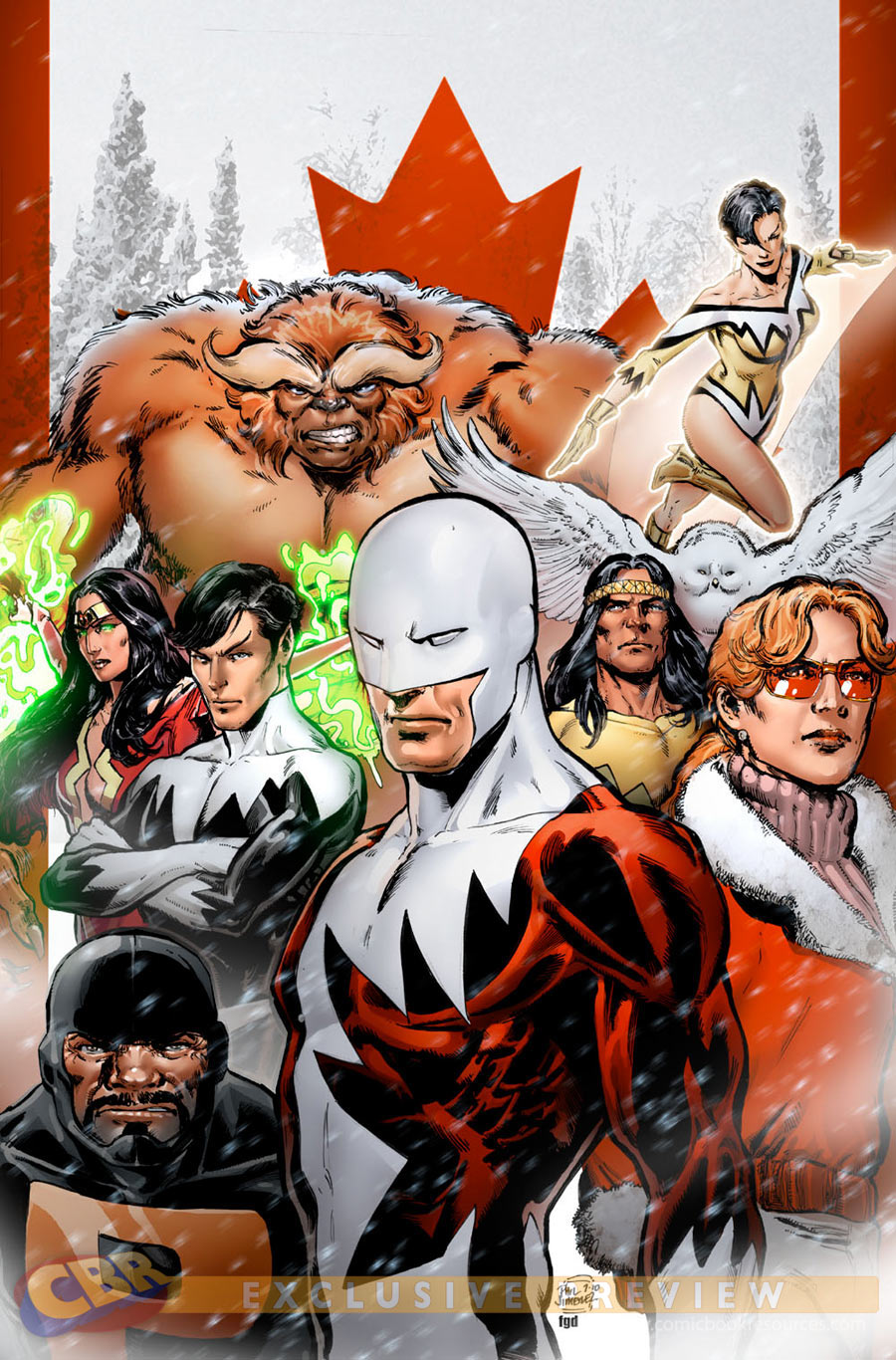 Alpha Flight is a fictional superhero team published by Marvel Comics, noteworthy for being one of the few Canadian superhero teams. Created by John Byrne, the team first appeared in Uncanny X-Men #120 (April 1979).
Within the Marvel Universe, Alpha Flight is described as "Canada's answer to the Avengers." Most team members have distinctly Canadian attributes, such as Inuit or First Nations heritage. Throughout most of its history, the team has worked for Department H, a fictional branch of Canada’s Department of National Defence that deals with super-powered villains.
The team was originally merely a part of the backstory of the X-Men’s Wolverine but, in 1983, Marvel launched an eponymous series featuring the group, which continued until 1994. Four short-lived revivals have been attempted since. After the resurrection of the team in the one shot comic Chaos War: Alpha Flight which was published as part of the Chaos War event, they went on to star in an eight-issue limited series in 2011.

Excalibur is a Marvel Comics superhero group, an off-shoot of the X-Men, usually based in the United Kingdom. Conceived by writer Chris Claremont and artist/co-writer Alan Davis, the original Excalibur first appeared in Excalibur Special Edition (1987), also known as Excalibur: The Sword is Drawn.
The first Excalibur consisted of the British superhero Captain Britain, his lover Meggan, and several one-time members of the X-Men and related mutant teams. An eponymous series featuring the team lasted from 1988 until 1998. Originally, the series involved cross-dimensional travel that incorporated as many elements of Captain Britain’s mythos as it did the X-Men’s.
Captain Britain reformed Excalibur to defend London in a series entitled New Excalibur, which ran from 2005 until it was replaced in 2008 by Captain Britain and MI13.
Between Excalibur’s disbandment and reformation, a short-lived series entitled Excalibur chronicled the efforts of X-Men founder Professor Charles Xavier and his former nemesis, Magneto, to rebuild the mutant homeland of Genosha. Although written by Claremont with the same title, it had no connection to the superhero team.

The Authority is a superhero comic book series published by DC Comics under the Wildstorm imprint. It was created by Warren Ellis and Bryan Hitch, and follows the adventures of the Authority, a superhero team mainly composed of Ellis-created characters from Stormwatch.