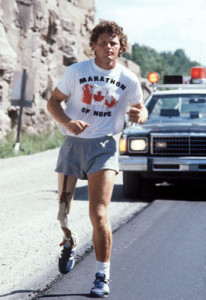 I'm taking a bit of a turn from the usual Blog content this week. I am currently working on a new Canadian musical based on the true story of an inspirational young man.

In 1980, after losing his right leg to cancer, Terry Fox began his "Marathon of Hope". It was Terry's dream to run across Canada in an effort to raise money for cancer research. After running over 3300 miles at a rate of a marathon per day, Terry was hospitalized near Thunder Bay and it was discovered that his cancer had returned and was in his lungs.

Although Terry's dream and ultimately his life was cut short, his dream carried on in his memory. Since 1981 "Terry Fox Runs" are held across Canada and around the world each September and have raised over 600 million dollars for cancer research.

Since this weekend is Canadian Thanksgiving, it seems appropriate as a Canadian and cancer survivor to honour a man who gave so much of himself to help others.

Check out this ESPN profile of Terry.

4 Responses to Make It Sew: The Costume Blog – Inspiration