What Were They Thinking: More Marvel-ous Transformations

As promised two weeks ago, when we covered DC's weirdest and most ill thought out transformations, this week we're going to have a look at the exact same thing in the Marvel universe. As with last week, these are all completely cannon. 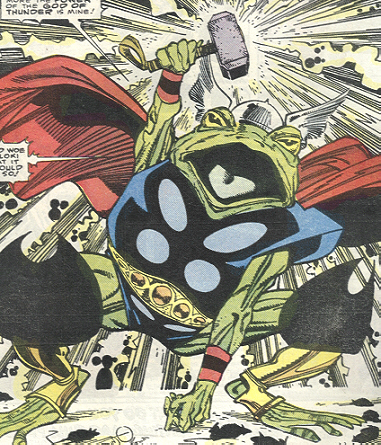 The most requested for me to cover of all Marvel's transformations, the one where Thor gets turned into a frog by Loki and only gets turned back after finishing a frog/ alligator/ rat war in Central Park (what alligators are doing in Central Park I have no idea) and then getting kissed by a Princess. No, that's not right. But anyway, considering his brother is the God of Mischief, it's amazing Thor hasn't undergone more crazy transformations, but this one gets an A for effort and an E for imagination (I mean a Prince (of Asgard) getting turned into a frog? Someone at Marvel had been at the big book of fairy tales at that point and obviously hadn't got past story one.)

I must also give an honourable mention to Loki for his gender swapping routine during the post- Ragnarok to Dark Reign era of the Marvel universe. Sure he may have been inhabiting the body of Sif, but he managed to be both strangely hot and immensely creepy with it at the same time. 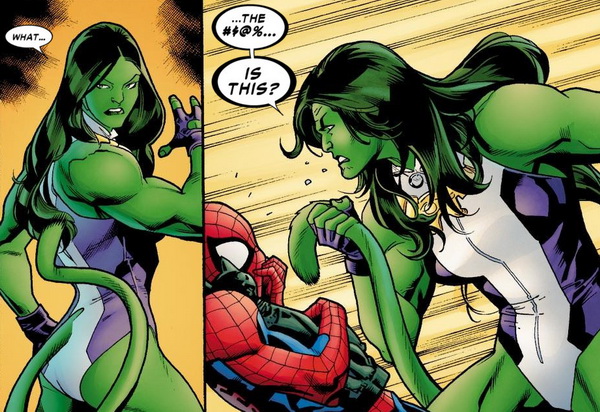 Oh the puns! Unfortunately as this happened in a spider-Man comic (Avenging Spider-Man 7 if you want to find it), they've all been taken. Basically, Spidey and She-Hulk team up to stop some thieves from stealing some ancient Egyptian artefacts from a museum. Unfortunately for Jen, she comes into contact with a statue of the Lion Goddess Bast, who tries to turn Jen into her new champion.... by giving her a tail. Ok, it's not really a full transformation, but that issue was just funny and Spidey is Spidey through out because if your friend grew a big green tail, you'd take the piss as well wouldn't you.

3. Taking Pryde in herself.

This one's taken from a late '80's issue of Marvel's premier British team (that included as far as I'm aware only one Brit)- Excaliber (Excaliber Vol 1 issue 2). So this race of creatures called Warwolves (who look nothing like wolves btw) from the Mojoverse capture Kitty Pryde and one of them decides to use Kitty's skin as a disguise/ suit. And then after putting on Kitty's skin (I know) he starts to become physically more like Kitty, who then appears from the Warwolf's mouth, ripping him in two in the process, apparently having phased inside the Warwolf as he tried to skin her. Because there just isn't enough WHAT? in the world. Also a special mention goes to another one of Kitty Pryde's collection of awful costumes. Come one, what's with the spikes? 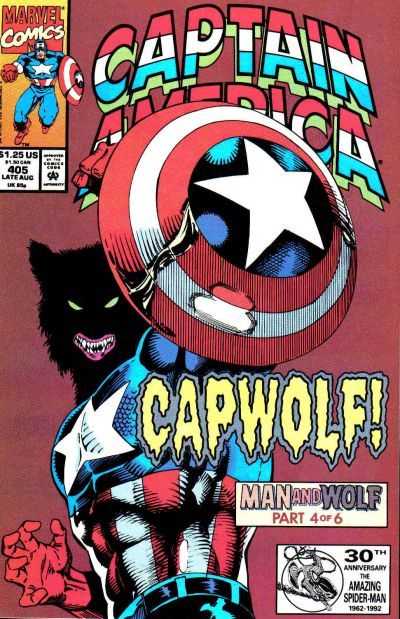 Because no list of stupid transformations is complete without one of the company's major characters getting turned into a Were-something or other. Last time it was Batman, this time it's Captain America, an American Werewolf in New York, and he also takes Wolverine along for the ride as well. Cap manages to get himself injected with a werewolf mutagenic formula (because biting just isn't good enough these days) and then captured by a tribe of werewolves whose leader has hypnotic and mystical powers. He escapes and gets captured by Nightshade (who injected him in the first place) and gets locked up with a load of other Werewolves plus Wolfsbane from the New Mutants. So to cut a long story short, Cap escapes with the help of Wolfsbane and Wolverine (who is also a werewolf at this point) teams up with Doctor Druid, defeats the leader of the Werewolf tribe, turns everyone back to normal and defeats Red Skull, who was behind the whole thing in an attempt to get some of Caps blood so he could create an evil version of the American hero. Because that just makes so much sense. 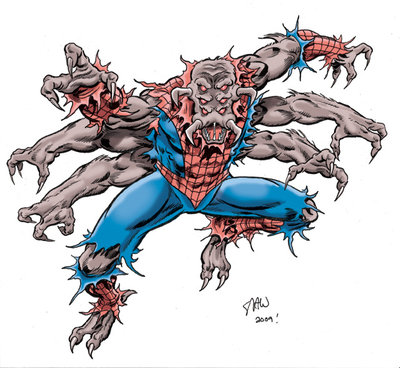 Oh, come on. Do I really have to outline this one? Poor old Pete has been transformed so many times he might as well change his name to Jimmy Olsen. He's grown four extra arms, turned into a giant man-spider thing, got Hulked out, injected by Curt Conners Lizard serum etc. etc. Plus half his supporting cast has had it as well. MJ and Aunt May get possessed by parasitic, symbiotic aliens, then you've got all of the Ultimate Universe Goblins, Ultimate Universe Gwen Stacy/ Carnage thing, Demo-Goblin, the list goes on. Oh and in an alternate universe, he's a pig, but he will quite often be transformed into said pig in the mainstream universe as well. At least maybe having Doc Ock take over his body might have one decent side-effect.

3 Responses to What Were They Thinking: More Marvel-ous Transformations