Make It Sew – The Costume Blog – The Hobbit 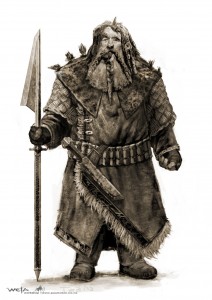 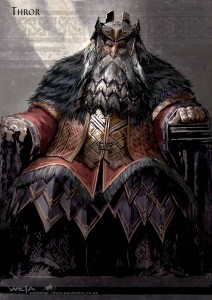 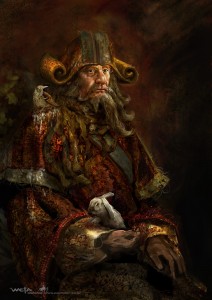 “The Hobbit: An Unexpected Journey” features at least 13 dwarves, a hobbit lead and a shire-full of supporting hobbits, three wizards, an elven queen and many more characters, and that’s just the first film in the Peter Jackson trilogy; Britain-based designer Ann Maskrey was tasked with creating costumes for them all. Maskrey is new to Middle-earth, but she previously worked on costumes for the “Star Wars” prequels, “Clash of the Titans” and Tim Burton’s “Alice in Wonderland.” Hero Complex recently spoke with Maskrey about the challenges of dressing the dwarves and designing the look for a new wizard.

HC: Each dwarf has such an individual look. What was it like to develop those costumes?

AM: It was quite a challenge really, simply because there are 13 of them, and Peter Jackson wanted them to have such a distinct, separate look from each other. He really was very keen on them having a different silhouette even before we started talking about the different colors they would all have. And then beyond that, he wanted distinct characteristics, and also distinct hierarchy, because some of the dwarves are more noble than others. So I had to emphasize all of that in just the choice of fabrics and the level of decoration, and by the time you get to dwarf No. 7 of 13, you’re thinking, “How are we going to make the next one look different?” It’s difficult, but great fun, actually too. I did learn an awful lot as I went along. Even though I’ve done a lot of other movies in the past, I’ve not really done anything quite like that with so many key principals really up front the whole time, and had to design it to the level of detail that we’ve done.

HC: It seems like such an involved process. How long did it take to design a costume for each character?

AM: I didn’t have very much prep time. I was only asked to be the costume designer, I think, four months before we started shooting, which for a film this size and scale — now three films — that’s very, very little time to do it in. … You have to bear in mind that Peter’s done “Lord of the Rings”; they’ve got a back history. Things have got to blend with that. I have to get producer and director approval before we can start, so sometimes that process takes a long time, because they’ve all got to agree. … Sometimes you’re given pages three days before a costume would be in front of the camera, and it would be something that you didn’t even realize was in the script before. That happens on nearly every movie — you suddenly have to do another outfit, and you’ve got like a day or two days’ notice. You get used to it. … I love designing. I’m perfectly happy if someone gives me a challenge, and it certainly was. There’s a lot of work. The dwarves, particularly, once you’ve got 13 dwarves approved in that first costume, and then done the camera test, and everyone’s happy, you’ve then got to do the repeats for the stunt people, and the repeats for the small-scale dwarves, and they’ve all got to look identical, and it’s just a huge amount of work for the workroom to cope with, and at that point, I have to think about the next thing and what comes after that.

HC: Much of your experience is in fantasy and genre film — “John Carter,” “Batman Begins,” “The Fifth Element,” “Alice in Wonderland.” Were you able to draw on that experience for “The Hobbit” films?

AM: I have to say practically every movie has got a different vibe to it. … There’s such a lot to do, and you have to find a way of doing it. It’s just different. And I have had a lot of experience on sci-fi movies. I am very used to doing different costumes. I worked out how to do the bat costume. It wasn’t just me, it was a whole team of us, but we all got to kind of put it all together and get it on an actor. I like working with tricky things.

HC: Was working in New Zealand different from working in the U.K., where you’re based?

AM: Not to say there’s a right way and a wrong way, but obviously here, I’m used to people’s method of working, and I’m familiar with a lot of technicians over here, whereas over there I knew nobody. So that was kind of difficult for me to sort of gauge what I could do and how to go about it. There’s a very strong craft base in New Zealand. For example, I was really blessed because there was a woman over there called Beverly, who did all of our hand-knitting. I mean, you would never have a hand-knitter at your disposal in a workroom for the full length of a production in this country. You’d have to send it out to a fashion house and get some mockups done first. You’d never be paying someone to hand-knit all the way through your movie, which is what we did, and she did it all on her own practically, which to me is extraordinary. I feel really blessed to have had that.

HC: Is there a costume design that you’re particularly proud of?

AM: It was lovely doing things for Cate Blanchett, but she could make a plastic bag look good. There are favorite other ones that are coming up on the screen next year. [In the first film,] I’m very fond of Radagast. I’m very, very fond of that one. It’s just everything about it. The actor [Sylvester McCoy] I knew before, had worked on a movie with him before. He’s a very likable man, and the character’s lovely. The costume used every part of the workshop to the fullest. We had embroidery done, we had fabrics made, we had fabrics dyed, the break-down team worked on it, the milliner did a great hat, the boys that made all the footwear did really nice shoes for him. To me, that was one of the most successful ones. And he’s a new character.

HC: You got to start from scratch with that one. What inspired Radagast’s look?AM: I very much wanted him to be very textured, like some bit of gnarled old tree bark. There was a little bit in “The Hobbit”  – in the script and a hint of it in the books — where you just feel that he suddenly appeared from behind a tree. So I wanted him to disappear into the forest and look like he was part of it, very organic looking. Peter Jackson himself wanted a real lopsided quality to him, but that really came about from having like one long sleeve, one that was torn off, odd shoes, an uneven hem, and then his waistcoat is buttoned up all irregularly. But I had such fun really doing the embroidery designs and picking the fabric, because it’s not all brown; there’s yellows and blues in there. There’s a couple of really good textile girls that I worked with, [and they injected] little threads into the felt [of his hat], and it looks like moss is growing in the hat. I suggested something for the collar on the top coat, where you sewed lots of strips of felt side by side, and then butted them up to each other irregularly, and that looks like tree bark. And we had a lot of fun creating textured fabrics. I’m really fond of layering one fabric over another and then sort of peeling some of it away. I just think it’s particularly successful really. I have to still say it’s probably my favorite. It’s all from the forest.

HC: What was it like to see Sylvester in costume on set after all that work?

AM: It’s hugely satisfying, especially if you’ve gone through a bit of torture along the way. After about 12 or 13 designs, and you kind of nearly get there, nearly get there, and then you get there, and you think, “Now that’s the one.” And it gets approved by Peter, and off you go. And you then have final, final approval the day before a shot, go on set, and it’s a very nervous moment really. When people are shooting something, and you have to take Sylvester in his full hat and costume and parade him in front of Peter so he can actually see it the day before the shoot, so there’s lots of nervous waiting around. But to me, it’s always a thrill. I think, “Great, that’s another one crossed of the list, and I’m happy with it.” The warm glow of satisfaction quickly disappears when you look at what else you have to do.

HC: Quite a few actors and crew members on “The Hobbit” films are “Lord of the Rings” alumni. What was it like to be one of the new folks?

AM: I think it’s good that they had some new people, because I think it needed a breath of fresh air. In the early days, I’d be checking over what they were doing for the hobbit accessories or hobbit bodices, and how they were finishing them off, and I’d find that they were doing something that I didn’t particularly like, and I’d say, “Why are you doing it that way? I’d like it this way.” And they’d say, “That’s how we did it before.” And I’d say, “Well, ‘before’ is 10 years ago. And that’s not what we’re going to do now. We’re in 3-D, we want something better. … That was then, and this is now, and you’ve got to lift your game accordingly.”

HC: What a lot of attention to detail.

AM: You have to. Because the thing is, even if that costume that you spent hours on is only seen on camera for a few seconds, and it flits by, and the lighting’s dark, you know that on a film the scale of “The Hobbit,” at some point there’s going to be a big still photo of it, and at some point it’ll be in some exhibition, and you want to be able to go, “Look at that embroidery. Isn’t it lovely?” Sometimes you don’t see the detail in the movies, but because it’s 3-D and 48 frames per second, you do feel like you’re falling into the picture. You’re going to see a lot of it. So you couldn’t just slap it together.