What Were They Thinking ♯1- The Gungan Menace

A new bi-weekly topic I'm trying out now. Here we'll have a look at some of the weirder, unpopular or down right stupid decisions made by people in the industry who should have known better. And to kick us off, we'll look at a nerd-rage classic.

Now, there are some good bits in Star Wars Episode 1. Liam Neeson, Ian McDiarmid's acting, Darth Maul and the final fight. However, in many (most?) peoples eyes this isn't enough to salvage a below par script, a slow story progression and a pointless Formula 1 style pod race sequence that went on ten minutes too long. However, most peoples ire is raised to its highest by the focus of this week's column. 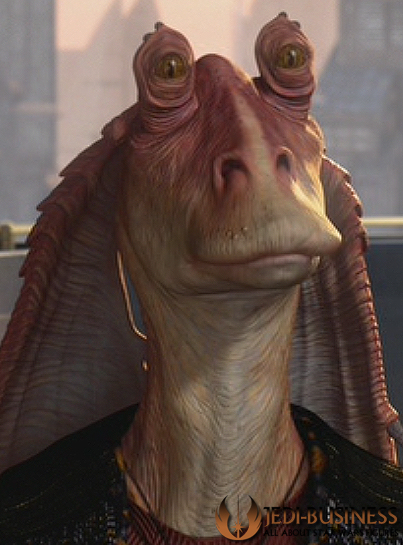 Let's kick off by admitting that, as a kid, I loved Jar Jar. However, after a few years, I realised that, actually, he is reeeeeeaaaaalllllllly annoying. But that hits the nail on the head, George Lucas has been quoted as saying that Jar Jar was aimed squarely at the kids (and not only at your childhood). And it's not like he didn't have form on that front. He did the same thing with the Ewoks. Now, having been born a decade after Return Of the Jedi came out, I don't know first hand what the reaction to the teddy-bears from Endor was at the time, but I know a few people who hate them as much as they do Jar Jar. But of course, Mr. Lucas doesn't care about that either. To quote the man himself- "The movies are for children but they [the fans] don't want to admit that... There is a small group of fans that do not like comic sidekicks. They want the films to be tough like The Terminator, and they get very upset and opinionated about anything that has anything to do with being childlike." Whilst he obviously hasn't heard the phrase "the customer is always right", it's his franchise, he can do what ever he wants with it.

There is a bigger problem with Jar Jar though, he could be just a little bit racist. Allegations of such have been levelled at him since he appeared, comparing him to the 50's blackfaces and a "laid back clown" stereotype of black Caribbean's, especially Rastafarians. Whilst it has been denied strenuously, shurely George Lucas has more brains than that, to make a character aimed at children that is straight away associated with a highly negative stereotype? Either he really didn't see how such a stereotype could be read into one of his characters, or he was so engrossed in the rise of the nazi party analogy he was sub-scripting into the film, he completely didn't notice.

Though it may be stupid to attribute the massive nerd-rage around Disney buying Star Wars to just one character, the perceived threat of more Jar Jar like characters is certainly one factor. Luckily, due to his diminishing screen time throughout the prequels, and the fact the new movies are set after the originals, means it is unlikely he will return, it is a rumour that has been circulating, Ahmed Best (the actor behind the orange) has been vocal in his support for the sequels. But you know the best bit. Robert Pattinson has expressed interest in playing the character. There just wouldn't be enough vomit in the world.

This entry was posted in Movies and TV, What Were They Thinking. Bookmark the permalink.

7 Responses to What Were They Thinking ♯1- The Gungan Menace