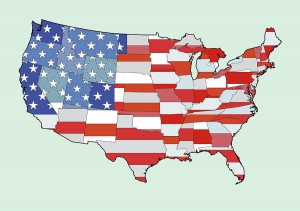 Apparently, there is a special celebration coming up for you guys across the pond. So, I thought it might be a good time to do a contest that I'm surprised hasn't been done before (just a take a few minutes to let the irony of an Englishman giving you a fourth of july contest sink in).

This week I want you to design a character that represents one of the 50 states that make up America. Doesn't matter what you do, just so long as it is connected to a state in some way. I know a few people have done things along these lines already, so I know this should be good.

There is a limit on entries this week, but I doubt anyone will reach it. You can only do ONE ENTRY PER STATE PER PERSON, so you can only do each state once (so there's a limit of 50 entries, but I'm not expecting you to do them all).

It'd be nice to see every state represented. If we do I'll make a map using my favourites for each state at the end of the week. But anyway, good luck and have fun.