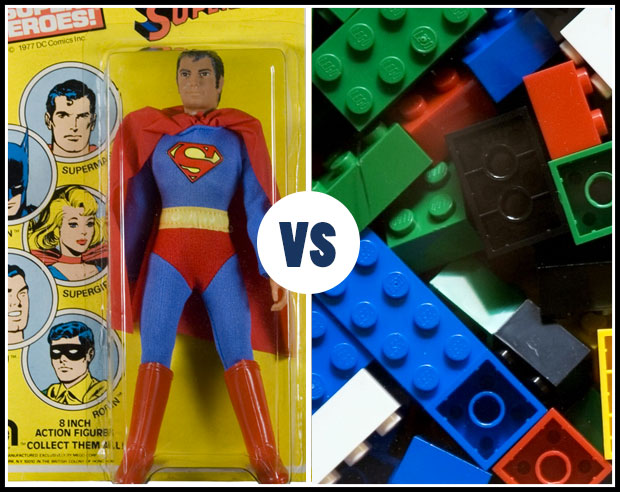 Our "Versus" poll this week is going in a different direction, focusing not on battles between characters but rather cherished childhood memories. Specifically:

The graphic shows my personal childhood action figure (the MEGO collection of fully articulated, actual clothing-clad super heroes), but it's just a placeholder. If you were a GI Joe or Star Wars or Micronauts person, then visualize that instead.

I had so many of those dolls when I was a kid, and I played with them till they fell apart. Which wasn't all that long, as they were plastic bits literally held together with rubber bands. The thin plastic boots and accessories were usually lost within minutes, though the record probably goes to Green Arrow's hat for Fastest Disappearance. In the Seventies the words "choking hazard" had not yet entered the national conversation.

Green Arrow was also my greatest modeling triumph. Having lost all of his extra bits and replaced them with such outstanding bits of household flotsam like Scotch tape, it occurred to me that his beard was too distinctive. So I heated up a butter knife on the electric stove and commenced my career as a would-be barber. Unfortunately I was not smart enough to use the non-serrated edge of the knife, and as a result Oliver Queen became Scarface, huge gouges removed from his delicate plastic face. He looked pretty tough, though.

The best part of the MEGO figures was that they were fully posable at all joints. You could turn their heads; rotate their arms at shoulder, elbow, and wrist; twist their waists all around; and bend the legs at hip, knee, and ankle. After a few years Star Wars started the trend of micro-figures that only twisted at the waist, shoulders, and hips, which was a huge step backwards. I found them impossible to play with, despite having circled every single one in the Sears catalog.

I waged epic battles in my room with Iron Man, Thor, Hulk, Superman, Batman, and Kid Flash. I think those toys were responsible for a lot of my creativity and imagination as an adult, and I miss them.

However, LEGOs are also a great spur to a life of imagination! When I was a kid we didn't have the fancy pre-generated kits that could make flying helicopters and fully functional nuclear engines. We just got a bucket of random parts, including the giant green slabs that I can only imagine were to supply the massive desire of children to make fields of grass. If that's what the LEGO folks meant them for, I missed the point entirely. Instead my friend Louis and I would use them as the base for building hulking dreadnoughts, towering bricks of bristling weaponry that we would then hurl across his long tile hallway to smash into each other until one finally disintegrated.

I'm sure that's just one reason I was his mother's least favorite childhood friend.

But with a bucket of LEGOs you could entertain yourself for hours, building all sorts of awesome stuff. They are still great toys to this day, as evidenced by their massive worldwide popularity. And in theory, at least, they're totally non-violent. I support a world where violence does not exist, because then I could take over the whole stinking planet with just a butter knife.

That's a Scott Adams Dilbert joke, I must confess. Although as only the second butter knife reference in this post, I think I can claim some sort of moral superiority. And if not, back off, I've got a knife!

For me, though, I'm going to go with my action figures as my favorite childhood toy. Because my action figures never laid in wait in the deep shag carpet, pointy bits up, to stab me in the bottom of the foot like urban punji sticks. I'm pretty sure that's why I am flat-footed today. In fact, it would not surprise me if in fact LEGOs are advanced sabotage weapons Denmark has inflicted on us to prepare us for their ultimate invasion. Oh sure, you might say, Denmark is a peaceful country too small to threaten the world, but once everyone else is crippled from stepping on LEGOs you'll be singing a different story, pal!

What about you, what was your favorite childhood toy? Do you still have some of them and do you still play with them? I say this, of course, while looking at my Justice League action figures. Though on second thought, Weather Wizard looks suspiciously like he's getting ready to stab my foot ... I bet he's made in Denmark, the little bastard.