Enter the Man of Green

Posted on November 1, 2012 by mcknight57 | Comments Off on Enter the Man of Green

Enter the Man of Green

The annuals are still coming along. The great thing about this one is that involves a new villain that we've never seen before with a very personal grudge against the Man of Steel. Then there's the return appearances of Lex Luthor, General Lane, and John Henry Irons. This seems to be one of those "return of the supporting character" issues. It's fun to see all of these characters in the same place, just over a year after the introduction of the New 52. This may be one of the few annual issues that acts as both a standalone comic and a continuation of  events in Action Comics.

Sholly Fisch (yes, that's his real name) has penned a great annual issue here. Introducing a new version of the old and fairly obscure Kryptonite Man, he also brings in some old favorite supporting characters, as previously mentioned. Being as it's an annual issue with more pages than a regular, there was more room to be creative and write a great issue. That seems to have been more or less accomplished. You get a lot more for your money here. There's a better intro for the villain and with references to the first eight issues of the title. The dialogue is decent and the panel/page transitions are pretty good. Honestly, the greatest part of this issue was the tie-in to the original Action Comics #1 back in 1938, in Superman's original debut. 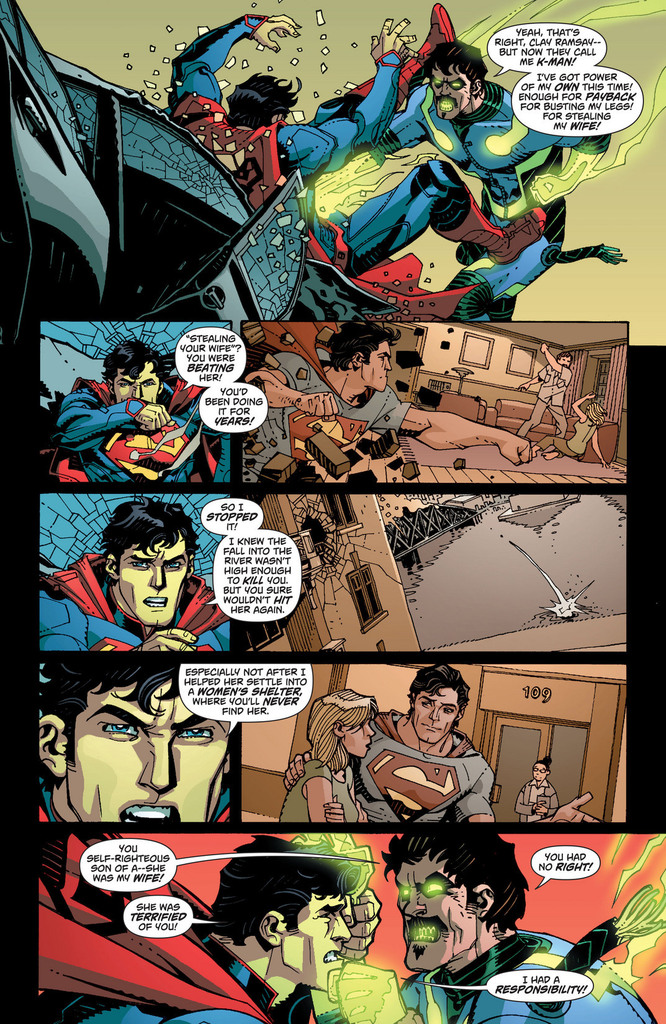 The art from Cully Hamner is good, for the most part. I actually like Hamner's art quite a bit. He was the concept artist for many of the New 52 costume designs. The art is great and somewhat simplistic due to Hamner pulling an artistic hat trick (triple-threat, trifecta, whatever) by putting up the pencils, inks and colors. As you can see at right, there are some great flashback moments here. The art is ink-heavy, but not in an off-putting way. The colors are rich and vibrant in the right places. Honestly, I still think John Henry Irons' (aka the hero formerly known as Steel) suit is a little odd. Not movie version "odd" but still. That design is probably the only artistic problem of this issue.

This comic has some great elements, both in the writing and the art. Therefore, it deserves an "A-". This could have been a little better, but not my too much. I definitely recommend that you buy this if you're a Superman fan or a completist.

P.S. I also recommend viewing the silent backup story here written by Max Landis and illustrated by Ryan Sook. We see a classic Superman villain being "born". He'll be quite interesting to see in later issues.