Apparently Wolverine's popularity is tied to his healing factor somehow.   He's been running a school for the last 19 issues. It's been his place to finally put his decades (more like a century) of knowledge and experience to good use. There've been some developments and I'm not even talking about Kitty being "pregnant". Well, I guess I am now. I mean before that, there was the Hellfire Club ('s children) attacking the school. Then we found out that a Krakoa was the school grounds, Angel came back all amnesiac and finally normal-looking-ish and Broo was shot in the head last issue. Any questions?

Jason Aaron has been doing a bang-up job of writing this series. This one, however was a little clunkier than the rest have been. It's mostly because he doesn't follow one simple storyline in this issue. The issue is broken up into three overlapping parts, with Kitty taking a more administrative role by interviewing prospective instructors, Beast doing his medical stuff and Logan doing "what he does best". The dialogue is good and fitting of every character, which seems to be something Aaron does rather well. The pacing is good and the ending gives us all just what we need. It's a good continuation of the events from the previous issue and a great lead into what could be one of the best arcs of this title. 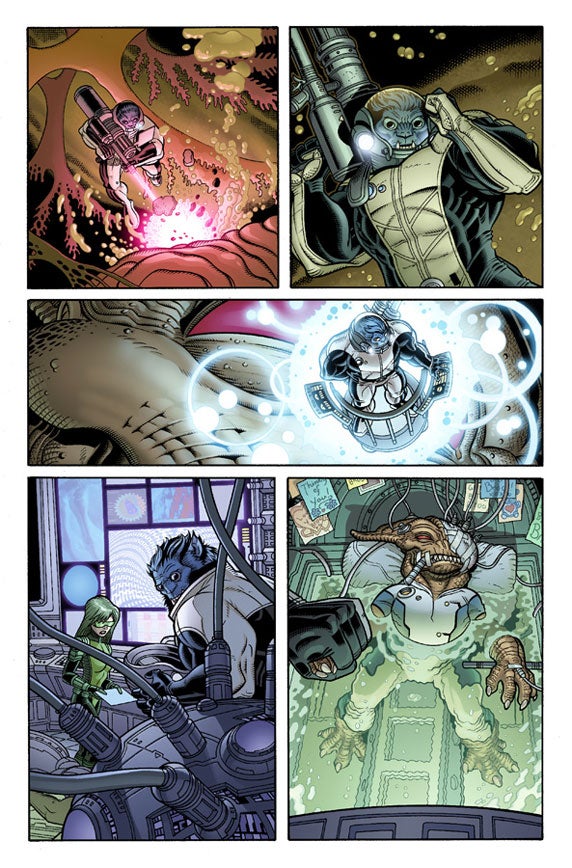 The art from Nick Bradshaw, shown at right without any text, is actually as good as any of the previous issues. The way he depicts everyone is actually pretty cool, especially Beast and Iceman. I have a hard time not liking his art in general. Then there's the inks from Walden Wong, which are good and allow the colors to really pop. That brings us to colorist, Laura 'DePuy' Martin. Really, the colors she brings really bring out the effects. Even something as simple as the solution that Bro's lying in is wonderfully colored. It's little touches like that that really bring a page to life. The art here is damned good.

With that, I have to give this another "A-". There doesn't seem to be anything really missing from the issue. Even the very end is amazing. Oh, and did I mention that there's a classic X-Men member joining the teaching staff? That's kind of important. For that surprise and the great writing and artwork, you should really pick this up.

3 Responses to Avenging the Broodling