Captain America vs. Captain Britain. Who has a better costume?

Rather than focusing on a fight between two factions, this week I want to take a look at costume design. Specifically, what makes a good patriotic super-hero outfit? Our competitors are: 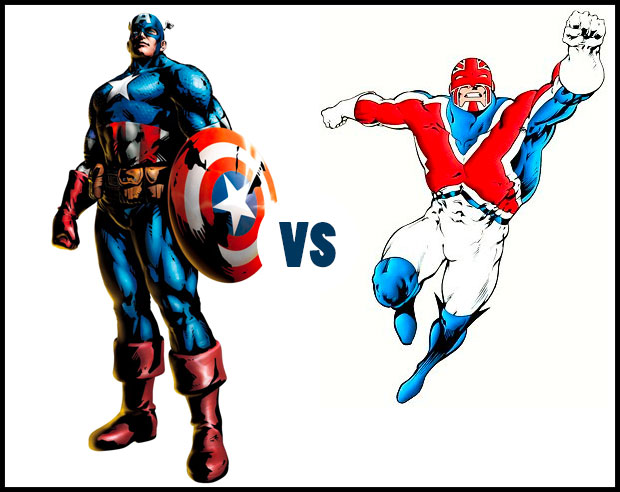 Captain America has had a number of subtle but important costume changes over the last decade or so after remaining essentially static for forty years prior, but the essentials are still there. I chose this specific version because I think it retains all the classic elements while still having a few modern touches to make it relevant.

Similarly, Captain Britain has had a number of incarnations, but this is the one that for me is the most iconic.

So what makes a patriotic super hero uniform work?

First, it has to have the nation's colors in it. Both meet that criteria with red, white, and blue in abundance.

Second, it ought to have some bit of national iconography on it, which both do, from the big stars and stripes on Captain America to the Union Jack on Captain Britain.

Third, ideally you'll get some sense of the flag's design reflected in the costume. Again, the stars and stripes layout works on the one and the x-shaped pattern for the other.

Finally, obviously, it needs to look cool. I think both of these gentlemen have nailed that as well.

So we come down to specifics, namely specific things I don't like. I have never been a fan of Captain America's silly head wings, and giant thigh boots on men just look dorky to me. I actually prefer Captain Britain's headgear to Captain America's, but the former's lack of a belt seems weird.

At the end of the day, the deciding factor for me is Captain America's shield. I think the character design needs to reflect something about how that country sees itself. These are patriotic super heroes, meaning they ought to represent the very best of the idealized version of their nations. And for the United States, that's the idea that we are the world's protector, that we act in defense and not in aggression (yes, I know, but this is comic books, people, not reality). The shield is a great way of getting that point across.

Unfortunately Captain Britain doesn't have anything like that. I don't know exactly what it would be, but a helmet isn't it.

So while I think I actually prefer Captain Britain's overall look, I'm going to say that Captain America better sums up the patriotic version of his country.

What about you, what do you think?

24 Responses to Captain America vs. Captain Britain. Who has a better costume?