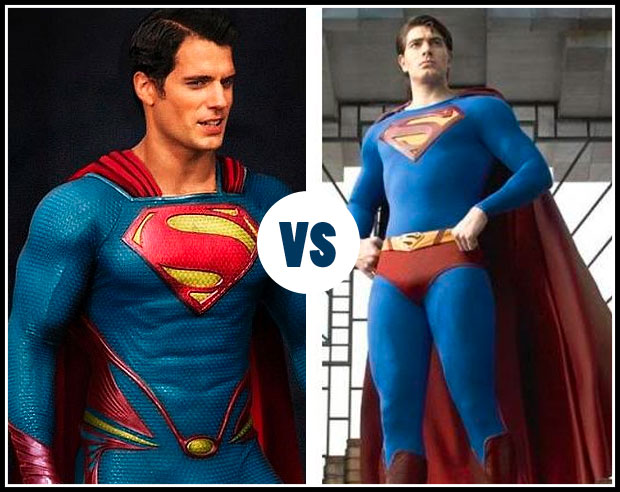 This week we're going to change up Versus a bit, and instead of asking who would win in a fight, I'm wondering which costume you like better. The guy on the left is Henry Cavill from the upcoming "Man of Steel" film, while the fellow on the right is Brandon Routh from the 2006 release "Superman Returns". Which do you like better?

In terms of the actors themselves, I prefer Cavill. Routh's small chin and big eyes always made me feel like I was watching Anime Superman, while Cavill's got a more square-jawed, somewhat rugged look to him.

The outfit reinforces that for me. The low-rider Speedo is gone, along with the scalloped neckline and cape that attaches at the shoulder. The Cavill version with its "modern" hexagon pattern, military style piping, squared-off neck, and forward-attaching cape are all more rugged and strong. This is a Superman who'll be just fine punching you into orbit if need be. Routh looks more like he'd want to take a long walk on the beach with you. Which is sort of what he did with Lex at the end of that movie, now that I think about it ...

So for me, I go Cavill all the way, but what would you say?

26 Responses to Superman vs. Superman