Sharing Day: Gone to the Dogs (and cats and monkeys and … ) Edition 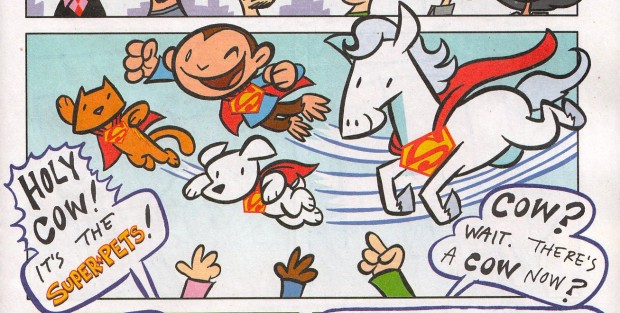 Pets have a long and rich history in super-hero comics, from the massive Superman menagerie to Ace the Bat-Dog to Gropey the Spider-spider*. And in my own life, we have a plethora of critters from horses to miniature donkeys to our great dogs (including one named Monster who really needs his own comic book). So our Sharing Day topic this time out is:

Preferably it would be about your own pets (or those of someone you know personally) and not, you know, a cut and paste of "Call of the Wild". Here's mine.

We were still living in Texas on hour hundred acre place, and had driven our truck out on the back part of the property for some reason or another. We had Flash, our big male Shiloh Shepherd, with us, and we let him out so he could run a bit while we were working. We thought our four miniature donkeys, vulnerable little cuties that they are, were safe on the other side of the ranch, near the barn. So we were startled when a few minutes later we heard loud, aggressive barking and some frantic braying -- apparently the donks were very close, hiding in the trees, and big ol' Flash had tracked them down!

We started to dash off towards the sound, convinced we'd find nothing but mangled equine parts and a happily-munching dog, when suddenly the barks turned to panicked yelps and we see our ferocious guard beast pelting at breakneck speed back through the cedar trees, Jack the angry miniature donkey hard on his heels, two feet tall of towering fury. Jack chased him around the truck three times, his braying beating out the yellow-bellied yowls of panic, until we finally opened the door and let Flash into the truck, where he remained cowering and safe from the prey turned predator. We dubbed him "Honorary Pussycat" for the day and he never lived it down.

Now it's your turn! What's your favorite pet story? In return for playing along, you can (if you want, no obligation) ask me a question about whatever you like and I'll answer truthfully. Photos of the pets in question are very much encouraged.

*(NOt an actual thing, but dammit, it should be!)

24 Responses to Sharing Day: Gone to the Dogs (and cats and monkeys and … ) Edition