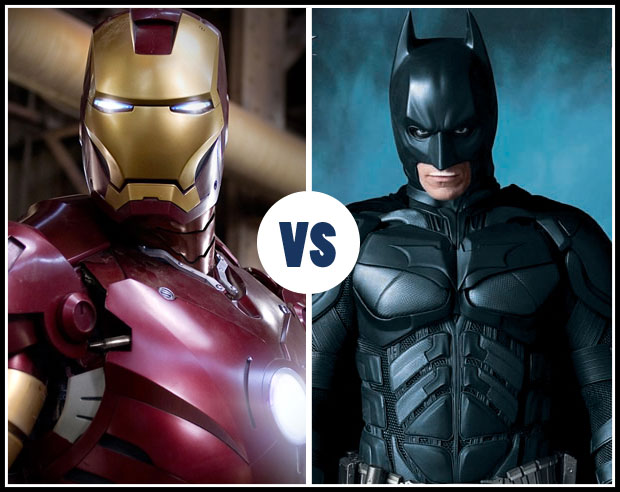 Our Versus poll today comes from Facebook commenter James Wickenden, and pits the two most iconic comic book movie characters against each other. Both are multi-billionaire inventor/crusaders who employ clever technological goodies in their fight against crime. So which would win in a head-to-head battle?

It's clear that the Iron Man armor employs a superior battery of weapons and defensive capabilities. It's essentially a one-man army corps. Batman's tech in the movies is effective, but lacks the raw firepower Stark Enterprises brings to bear. So from the standpoint of raw power, I give the edge to Iron Man.

Whenever we have a poll involving Batman, the conversation inevitably turns to "Will he have time to prepare", with the assumption being that if the answer is "yes", the result is "Batman wins". But the movie Batman doesn't seem to have the same supernatural ability as the comic book version -- he gets outthought and outfought by Bane up until the bitter end, while movie Stark seems to always be the one who's one step ahead of the game.

The caveat to that is that in the "Avengers" movie, Tony had to rely on Hawkeye's tactical abilities to swing the tide of combat. I think movie Batman would be at least equal to movie Hawkeye, so in combat tactical ability, I'd go with Bats.

For me, the tiebreaker comes down to the fact that Batman's girlfriend get killed, while Iron Man manages to hang on to Pepper Pots through three movies now. That's pretty good. So I'd vote for movie Iron Man if it were me, but I'm curious as to which way you'd go, and why. So please comment and tell us your thinking!

32 Responses to Movie Iron Man vs. Movie Batman. Who wins?