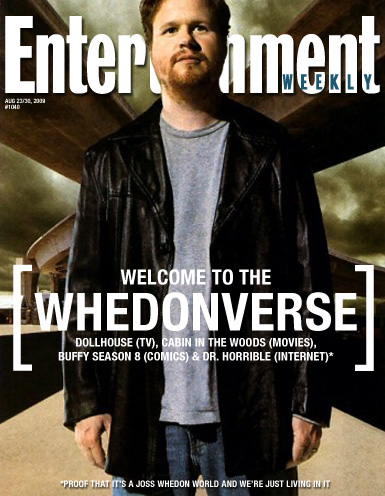 One of the cool things about Dragon*Con is getting to see some of the creators and actors you've loved in person. So my question for you is:

If you could have one hour of live, in person, one-on-one time to talk with any real-life, currently alive person from the world of geekery, with whom would you choose to conversate, and what would you ask them?

As for me, I'd choose Joss Whedon, as someone who has excelled at producing geeky content from multiple genres (supernatural, super-heroes, horror) in multiple media (television, musicals, movies, the web) and who just seems like a nifty guy. Among other standard questions ("What was it like directing Sarah Michelle Geller!?"), I'd ask him what commonalities he sees between super-heroes powers and stories, and more standard fictional entertainment. And if he's surprised that out of all the people he's "made big", that David Boreanz would be the one to ultimately star in another big hit.

In return for playing along, you can (if you want, no obligation) ask me a question about whatever you like and I'll answer truthfully.