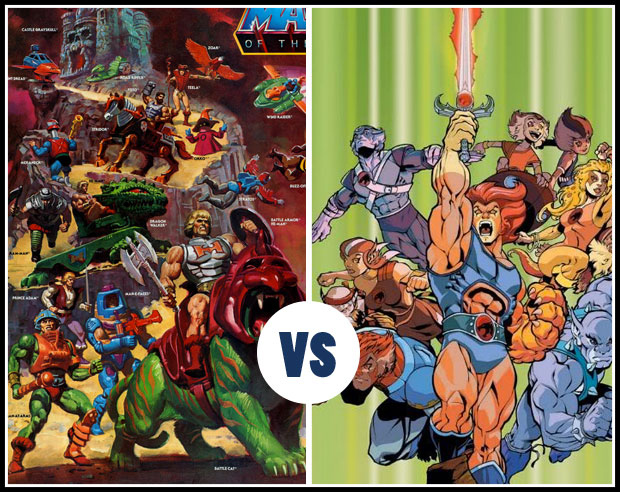 This week we pit two cartoons that shaped the mind of young people in my generation -- He Man versus the Thundercats! I loved both of these shows as a kid, and I wondered what would happen if they went up against each other. Also, I would pay cash money to see the initial confrontation, when the Thundercats realize that He-Man is riding one of their relatives like a pony. I can't imagine that would end well. At least, that was the case at my last family reunion. Not fun.

So sound off in the comments and lay it out for us! Who would win, and why? I'll post my reasoning after the jump so I don't unduly influence anyone.

To be clear, this is the entire He-Man cast vs. the entire Thundercats team. I'll run them down one by one.

Which leaves us at a 2-2 tie, meaning we have to go to the tiebreaker -- sidekicks. It's hard to tell who's a sidekick in the He-Man universe because come on, they're all slightly ridiculous. Fisto? Seriously?! But I chose Orko to be their rep, because come on, he flies around in a purple Gandalf hat and a towel. If that's not sidekick material, I don't know what is.

For the Thundercats, I'm going with WilyKit and WilyKat, because stupidly-dressed siblings are always sidekicks. It's in the Comic Book and Cartoon Handbook, you can look it up*.

Orko can do magic, but WilyKit and WilyKat have a collective name, like Brangelina, and that's automatically cool. Furthermore, that collective name is "ThunderKittens" which, come on, is like the most awesome name ever. Advantage: Thundercats.

So there's your winner! At least, in the opinion of this humble blogger. I can't wait to see how you all break it down!

* Not actually in the handbook, which doesn't actually exists. But it would totally be there if there were a there to be!

41 Responses to He-Man vs. Thundercats