We're going old-school DC vs. Marvel in this week's matchup, featuring two of the most powerful female heroes in each universe: 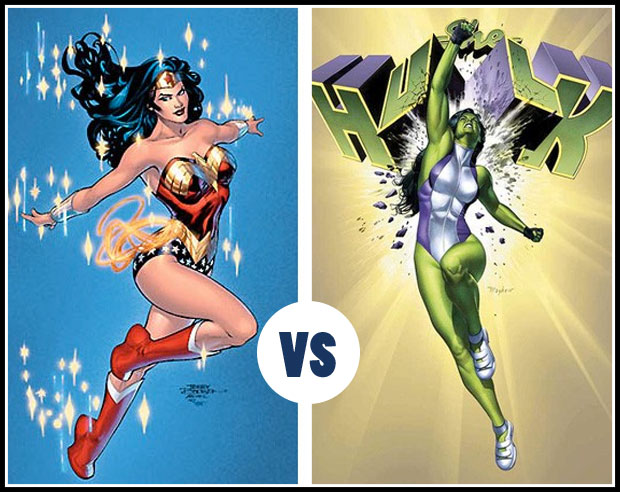 Each character has had a somewhat hit-or-miss history. Wonder Woman's had her powers taken away, been dressed up in a white bell bottom pantsuit, tied up and spanked by pretty much everyone, gone from passive secretary to mighty goddess and back again, and more. She-Hulk's gone from a joke to a lawyer to a pinup bikini model to the most fearful creature in the Marvel Universe.

At the meta level, Wonder Woman is one of the Big Three at DC, while She-Hulk's always been more of a sideline.

In terms of powers, I'd probably give She-Hulk the edge in strength since that's sort of her thing, but Wonder Woman is a trained warrior with the power of strength, toughness, and flight.

At the end of the day I'll go with the more popular character and say Wonder Woman would win an all-out brawl between the two. But what do you think>

47 Responses to Wonder Woman vs. She-Hulk