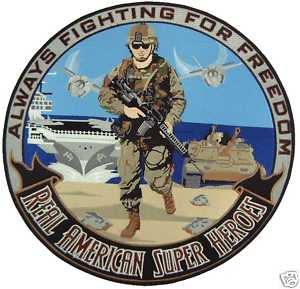 Here in the US, Monday is Memorial Day, where we take a moment to remember those men and women who have died while in military service. Men and women like my uncle Marshall, who passed away while in the Army (though not in combat). All Americans owe a huge debt to those who gave their lives to protect our freedoms. So I wanted to take this Sharing Day to share my gratitude for all of our fallen soldiers, and for their surviving families who have had to carry on without them. Thank you all.

So to me, our military service members are like real-life super-heroes. But since we're in the imaginary super-hero business, I want to ask you the following:

If you could have one super-heroic power in real life, what would you choose?

And no "The power to have any super power I wanted" nonsense! Although if that's your play, there are sort of ways around it, as you'll see.

Tempting answers for me are time travel, invulnerability (with the hope that incudes being invulnerable to the ravages of age), flight, hyper-intelligence (Reed Richards or Tony Stark style, so you could invent yourself stuff that would replicate a bunch of other powers), etc. I am not so much tempted by psionics, since I am pretty sure I don't want to know what other people are thinking. I've seen enough of that on Internet comment sites to last a lifetime.

I'm instead going magical. And it's the same power I'd use a Wish for if I could. Namely, I'd want the power to reach into any pocket or container and pull out anything I wanted that would fit in that container. So I could produce a wad of hundred dollar bills, or a vial of immortality serum, or invulnerability cream, or a nice BLT. Because I love me some lunch.

If you like, in return for answering my question to you, you may ask a question of me on any topic and I'll do my best to answer honestly and completely. Just leave your reply (and question, if any) as a comment. The goal is to learn a little more about our community!

So what would you choose as your one real-life super power?

This entry was posted in Daily Random Panel, Uncategorized. Bookmark the permalink.