Judge Woody from "Super Omega Deathbattle Warzone Apocalypse" announced his second round of Honorable Mentions yesterday on the game's Facebook page. For your convenience I am re-posting them here as well, but for the most up-to-date results you should really follow them on Facebook. 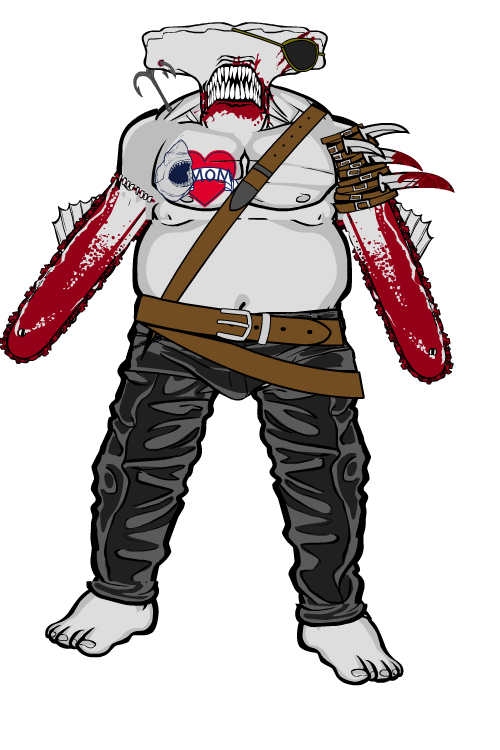 MarquisSamedi submitted a number of fantastic designs, but none as endearing as the loveable “Sawfin”. I actually did give some serious thought to adding him to the finished design, but he just didn’t quite hold up when I finally saw what ended up being the 9 winning designs. I think the shark-head tattoo over the heart tattoo was also kind of a turn-off, but I absolutely loved every other aspect of this character. Hopefully MarquisSamedi can shed some light on how Sawfin manages to put on his pants and buckle all of those belts… 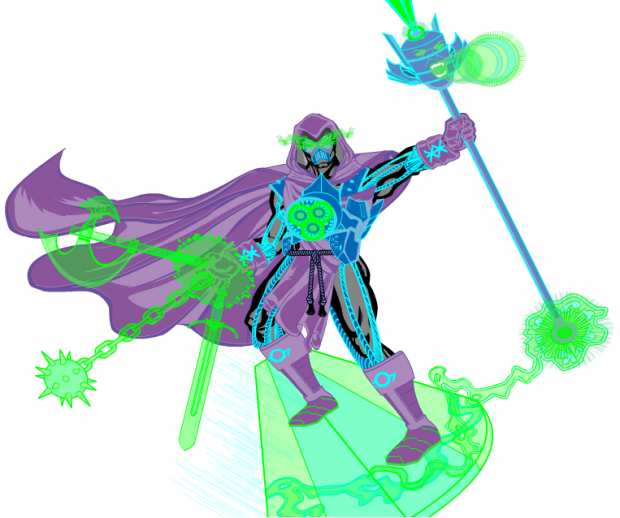 Kingslaughter_Archon’s Cybermage OlethroN nearly won just because of how much color he brought to the overall design. I imagine if Mr. Fantastic ever tripped LSD, that’s what he would see… I think the thing that finally turned me off to the design was the weird clockwork chest piece. It was just a little too much Flavor Flav and not enough psychedelic Dr. Doom. Though it wasn’t right for our promo piece, this design is still a bizarre yet masterful piece of Hero Machine artistry. 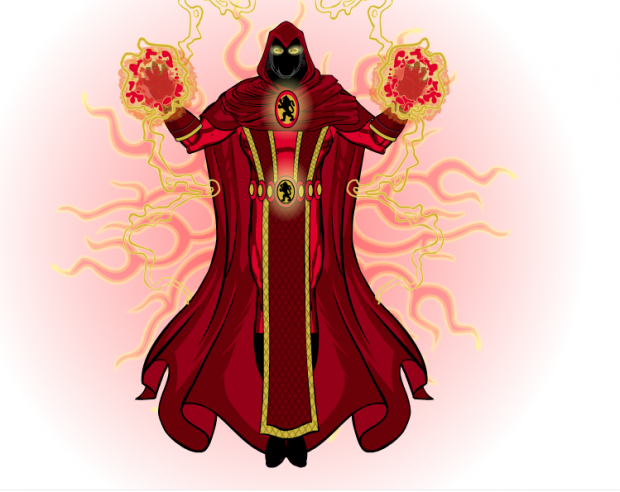 Kaldath is probably the most freakishly talented Hero Machine designer out there. I would love to see a design-off between Kaldath and AMS, but I’m afraid the world might end due to them using up all the awesome. Britannica is just an incredibly well-rounded design. He manages to look brilliant and badass all at the same time. I could somehow picture him in either a Dr. Strange comic or alongside the cast of Mortal Kombat (he almost looks like a cross between the old and new Ermac designs). He honestly deserved to be a winning submission, but unfortunately there were certain technicalities that prevented me from picking him. 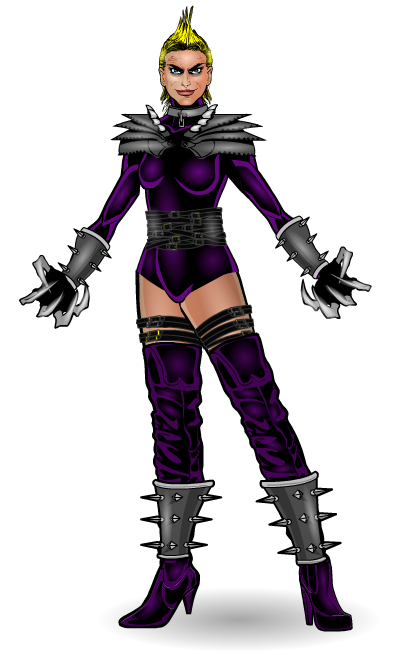 If I had to give an award for best overall designer, it would have to be either AMS or Kaldath. Some of their designs are so far beyond anything I thought Hero Machine was capable of, I am inclined to believe they belong to a lost species of extremely creative bat-like creatures that sleep during the day and create mind-blowing Hero Machine art at night. Regardless, AMS’s Mistress Claw came so close to being a winning character, I feel like “Honorable Mention” doesn’t quite do her justice. She’s like a female version of Shredder, or maybe the transvestite version of Dr. Claw from a gritty reboot of Inspector Gadget (you know you would pay to see that!). I hate to call attention to it, but she definitely does have a bit of a “husband bulge” goin on down there… 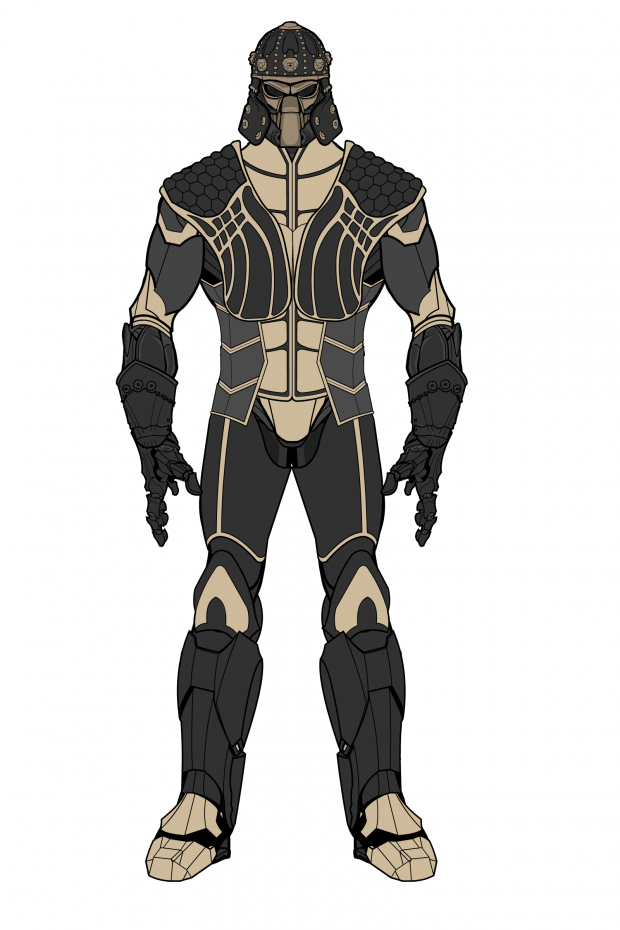 JohnnyGear’s 2nd Honorable Mention, the Ninja Assassin, was very close to being chosen as a winning submission. I ended up having to go with a more colorful design, but I still think this guy is perfect in almost every way. I love that he just looks “solid”, like he’s got weight and mass to him. I also just love that helmet/mask. It’s got kind of a Yoshimitsu/Predator feel to it, which is just awesome. Although I had to go with a more colorful design for the sake of the promo art, I honestly hate the idea of a “colorful ninja”, and think the subdued tones make a lot more sense. Great job, JohnnyGear! 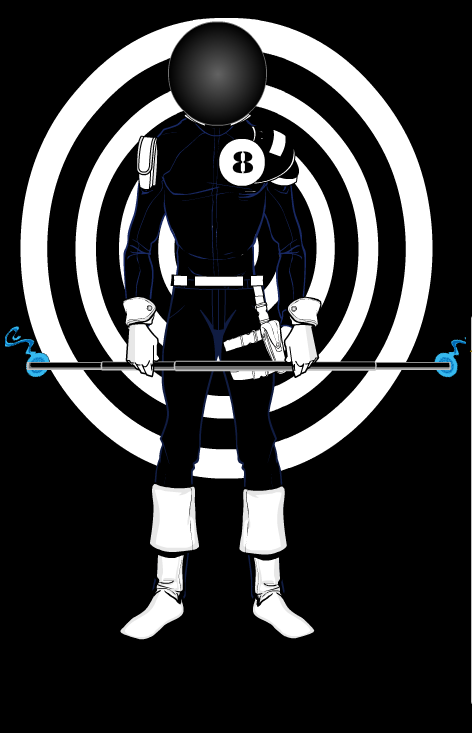 Rancid’s Highrollerstealthsoldier was one of our last-minute submissions, and he made me reconsider a few of the winning designs I had already picked out. He’s like a mix of Bullseye and Mysterio, which is a combination I don’t think anyone had ever considered before. I also love his weird little staff weapon. In the end it came down to color. The vast majority of designs were either black or grey, meaning I almost always had to go for the more colorful design when one was available. 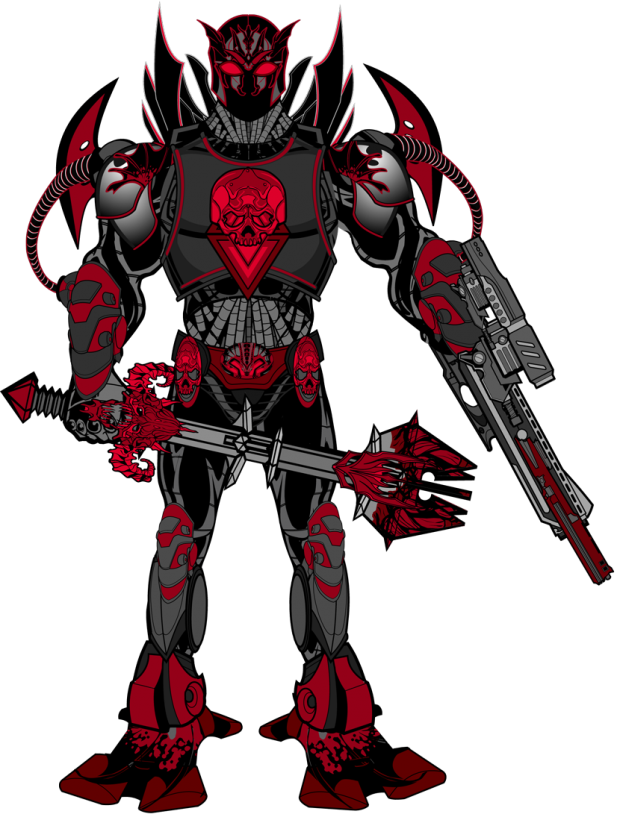 Dblade’s Hellborg is just plain awesome. He’s another character who would be right at home trying to bash in He-Man’s head with that crazy-ass mace. I love the exposed wiring underneath the armored frame, and the red/black/grey color scheme is a solid choice. This dude just looks lethal, and that’s all there is to it. If there hadn’t have been such stiff competition when it came to tech-oriented characters, Hellborg would have definitely had a place in the official promo design.