SODWA Honorable Mentions, Round One

Judge Woody from "Super Omega Deathbattle Warzone Apocalypse" has announced his first round of Honorable Mentions today on the game's Facebook page. He'll be doing that all week, leading up to the nine winners on Friday. Your best bet is to "like" their page, as everything will be announced there first.

Ladies and gentlemen, your first batch of Honorable Mentions, along with Woody's comments. Congratulations to these folks on jobs well done! 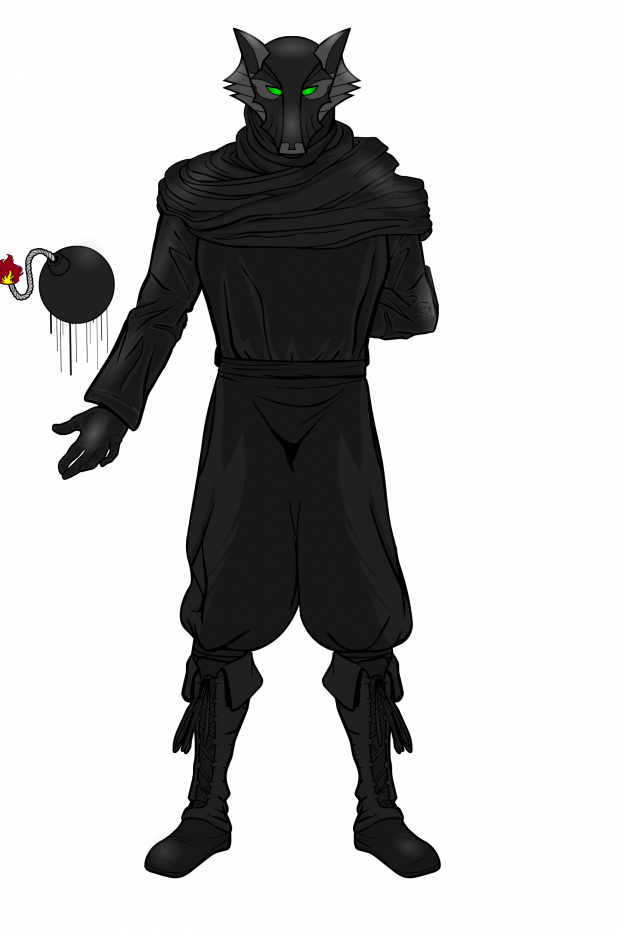 JohnnyGear's "Coyote” was possibly my favorite design out of all 400+ submissions. There's just something about this design that I absolutely love. His left arm is hidden, indicating his covert nature, but his left hand is tossing a lit bomb, which is about as overt as you can get! His costume is so simple, but he still manages to look fresh, unique, and dangerous all at the same time. I picture him as some sort of Deathstroke-esque assassin or Batman-esque vigilante. I tried my best to work him into the promo piece, but when it came down to it he just wasn't quite colorful or diverse enough to fit in with the other characters. It should be noted that Livio was just now able to see Coyote and is devastated that we won’t be able to include him in the promo. 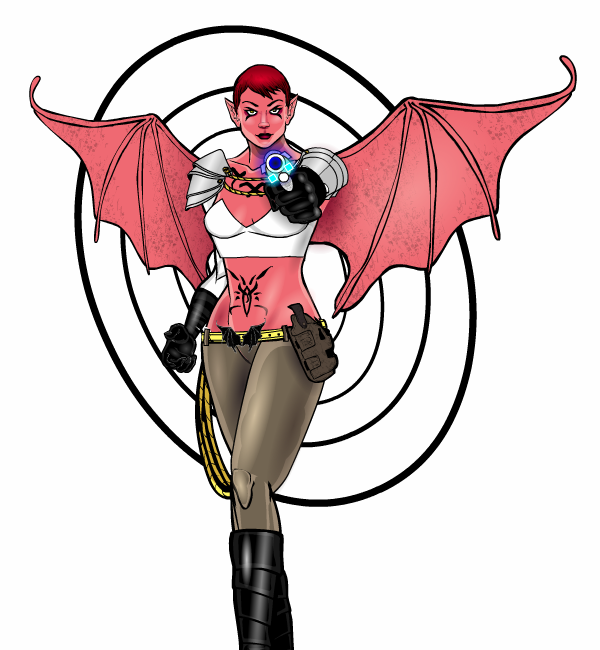 First off, I just want to say how incredibly talented designer HeadlessGeneral is. Almost any of his designs could have been chosen as Honorable Mentions, but I believe Lillian is the design that trumps all the others. This is a truly impressive piece of Hero Machine work. It doesn’t even look like it was done in Hero Machine. It looks like it was just straight-up hand drawn! I think Lillian is a very cool character who would be right at home in an episode of Buffy the Vampire Slayer. I looked at different ways I could fit her into the promo piece, but she just didn’t quite mesh with the other characters as well as the rival design I ended up going with. I came *this* close to swapping out a few of the winning submissions just to fit Lillian into the final piece. 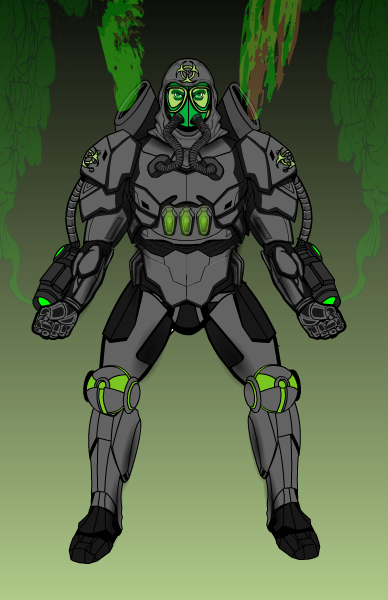 Myro’s “Biohazzard” spent quite a while sitting in my “winners” folder, until he was dethroned by a rival design. I think this design is absolutely killer, but unfortunately we got more tech-based designs AND radiation/”green energy” designs than almost anything else, making that a very tough area to excel in. Regardless, I would have loved to see what Livio could do with this design. Myro should know that taking Biohazard out of the “winners” folder was not an easy decision. 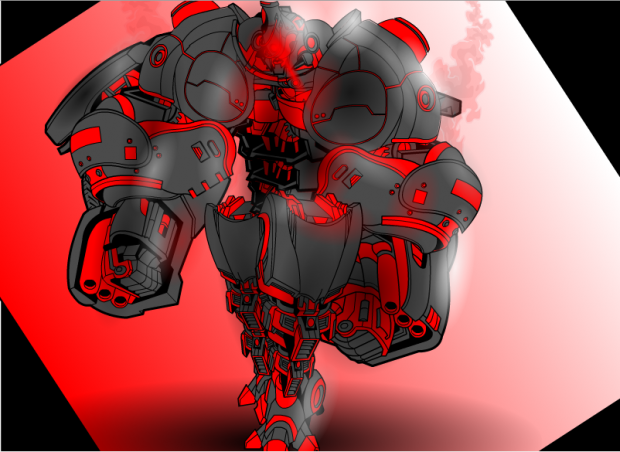 Abominal’s self-titled design was a perfect example of an incredible piece of work that was just too hard to see behind the complicated pose and special effects. I was totally blown away when I saw this piece, but was unable to really see enough of the actual character design to make it a winning submission. This is still an amazing example of not only Abominal’s incredible talent, but also of the power and versatility of the Hero Machine system. 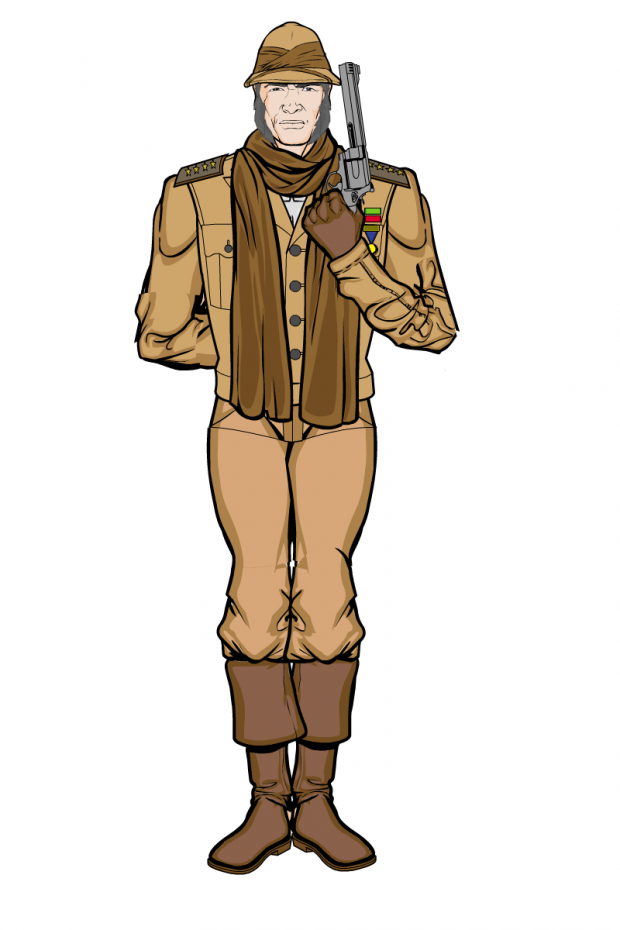 Starfighterace421’s “Major General Benedict Davis Brassington” was an early submission, and has consistently been one of my favorites. Not only would a character with his name be right at home in a game with a 23-syllable title like ours, but he just looks so badass. I could totally see him chilling with Teddy Roosevelt and the Dos Equis guy right before they rode some hippos bareback into the Amazonian jungle to recover the lost gold from some sort of evil jungle demons. The Major almost made it into the winners circle, but eventually I was forced to go in a different direction and give the Major an honorable discharge. 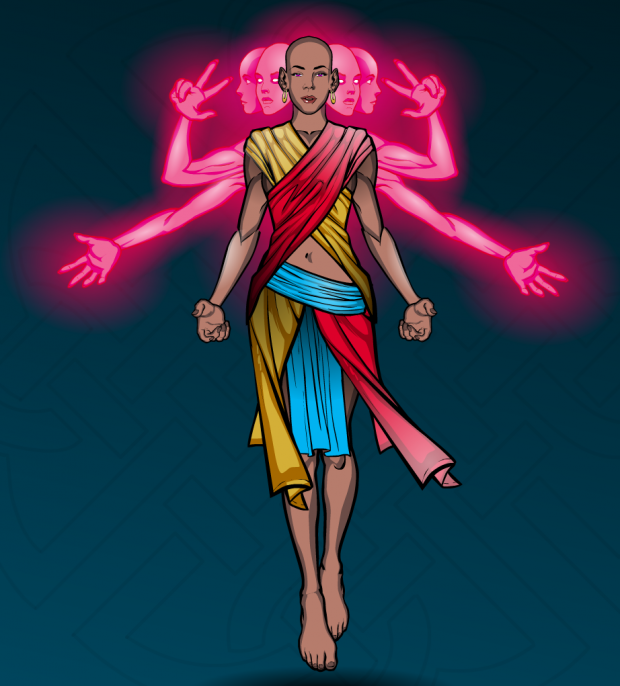 DiCicatriz-9’s “Asylum” was one of the more visually stunning and original submissions. She is just so cool looking, and was completely unlike any of the other submitted designs. I would have loved to include her in the final promo, but I just couldn’t figure out a good way to work her into the design. I know there are going to be more than a few designs I regret not going with, and I imagine Asylum will be near the top of that list.

26 Responses to SODWA Honorable Mentions, Round One