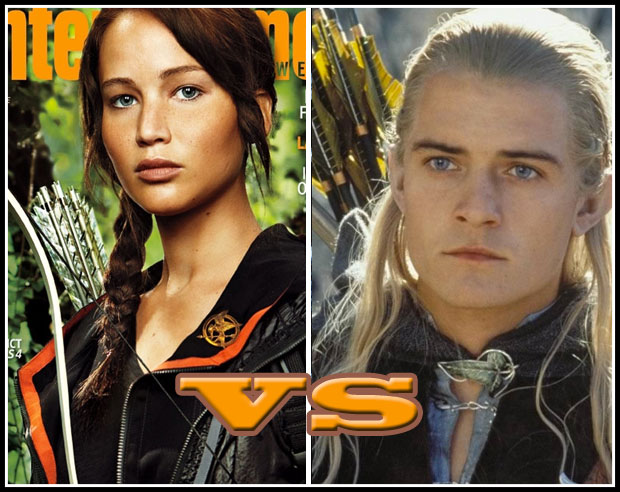 Two of the hottest archers in the history of film (and books!) square off in today's (well, Tuesday's, technically, but since I can't keep my days straight it's today) head-to-head "Versus".

Katniss Everdeen of "The Hunger Games" has smarts and guts in spades. She cares deeply about those around her and is willing to fight for her beliefs. Other people trust her and want to support her, especially when she's on fire. She's clearly an excellent archer with ample woodcraft. Also, her movie is currently out while Legolas', being more than a month old, has already been forgotten.

Legolas Greenleaf of "The Lord of the Rings", however, is an elf. He's thousands of years old, pale, lives in the perpetual gloom of a mighty forest, and ... wait, if this guy sparkles in sunlight I'm out of here. No? Phew! He's capable of astounding feats of agility, acrobatics, and courage. He can rapid-fire arrows while skateboarding on a shield and looking like solid hotness! He can scale and kill giant war-mammoths, he can use an arrow like a spear, and he has gloriously long blond hair. At the end of his story, unfortunately, he decides to give up on the planet and become a sailor. Or something, frankly the Silmarillion never made sense to me.

The point is, Legolas' elfin ass is going to bail on us, while good ol' human Katniss wants to save us all. For that alone, I go with Ms. Everdeen!

Make your case in the comments and cast your votes, folks!

25 Responses to Katniss vs Legolas