On our last episode, our ragtag band of plucky survivalists was about to be assaulted by a scraggly band of motorcycle marauders. We decided that rather than wading into battle on our shaking little chicken legs, we'd unlimber our trusty rifle and take aim at the vandals. Unfortunately it looks like at least one of them went to the Jean Claude Van Damm School of Fighting and Comportment: 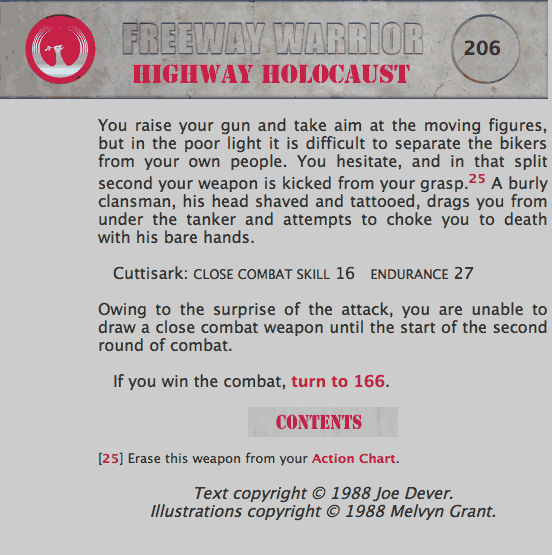 We done been KICK-SERVED, mofos!

Thus we find ourselves exactly where we did not want to be: Pitting our shriveled manhood against Bald Tatto Guy. I've been there, my friends, and believe me, it's not fun. Not fun at all.

Resigning myself to another "Time to pick another adventure and hope we don't die so fast this time" post, I nonetheless gamed it out.

On the first round we are at a -4 Combat Skill deficit. By my rough estimation that's like throwing Sheldon Cooper from "The Big Bang Theory" into a pit fight with a hungry Kardashian. I roll a 4, resulting in 3 damage to him and 4 for us. Not a good start since we begin combat with only 12 END while he has 27. Again, nerd vs. peckish yet surprisingly beefy pop star.

The next round goes better, however, and I roll a 10! Plus, with our Combat Knife we get a +2 to our skill, doing even MORE damage. He's now down to 17 and we are at 8. He's still healthier after getting stabbed than we have ever been in our whole lives.

On Round 4, apparently I chose to use my luck in this stupid contest instead of buying a lottery ticket -- you all own me 24 million dollars! -- as I again get a 10! We take nary a scratch versus his massive 7 points of damage. Around this time I get the astounding feeling that we might actually live through this!

Finally we close out combat with a pathetic roll of 2, which is nonetheless enough to bury our knife in his bald skull while bringing us to the general neighborhood with 4 total mighty points of remaining END. At this rate a radioactive Twinkie will do us in, but we are gloriously, magically alive! 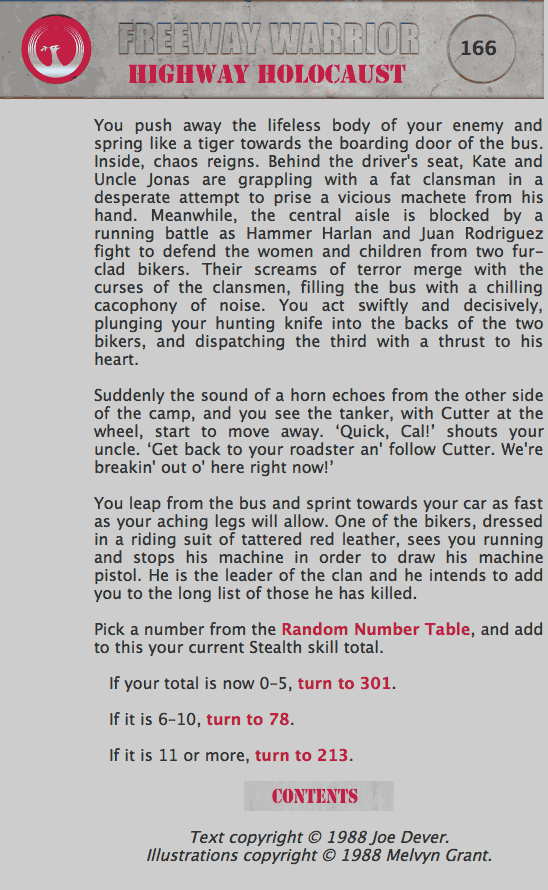 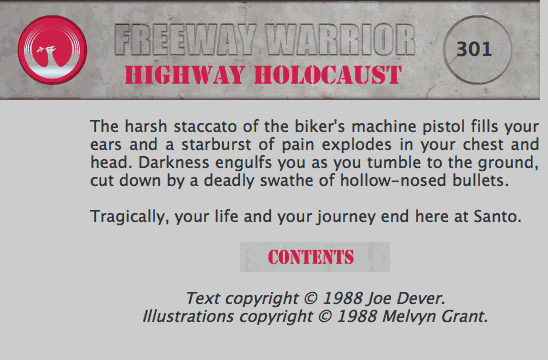 How did I not know they would raise my hopes to a heavenly high, only to crush them like a bug beneath a horrendous low?

So that's it. We're dead at the hands of mutant bikers from Texas. Strangely, I feel like this may be how my real life draws to a close as well.

But hey, at least we met some interesting folks along the way and got to fondle the mouldering corpse of an endlessly howling DJ, right?!

Feel free to sound off in comments about this adventure, and whatever you'd like to see us try next.