The Secret of 'Nyms 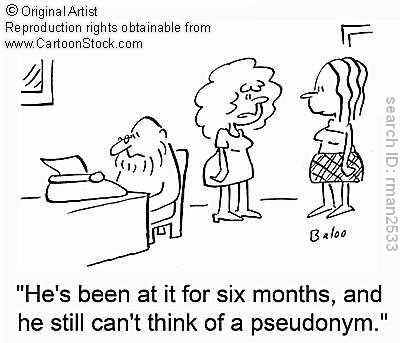 Why is the story behind your online pseudonym (either here or one that you use the most often elsewhere)?

I bet you can guess where mine -- "HeroMachine" -- comes from, can't you! I've also gone by "Grunch" before, which is a name I made up for a character in my aborted fantasy novel.

If you like, in return for answering my question to you, you may ask a question of me on any topic and I'll do my best to answer honestly and completely. I'm travelling back to Durango today, so my access and responsiveness depends on how the WiFi is at various airports, so if it's tomorrow before I get back to you, my apologies.

I look forward to hearing your stories!

137 Responses to The Secret of 'Nyms