All aboard the post-Apocalyptic Soul Train

Apparently there's no Macy's in post-Apocalyptic America, because given the chance we opted to run to the nearest store as soon as possible in our ongoing Freeway Warrior quest. In fact, maybe we should rename it Freeway Shopping Warrior, since we seem to spend a lot of time hunting sales rather than bad guys. 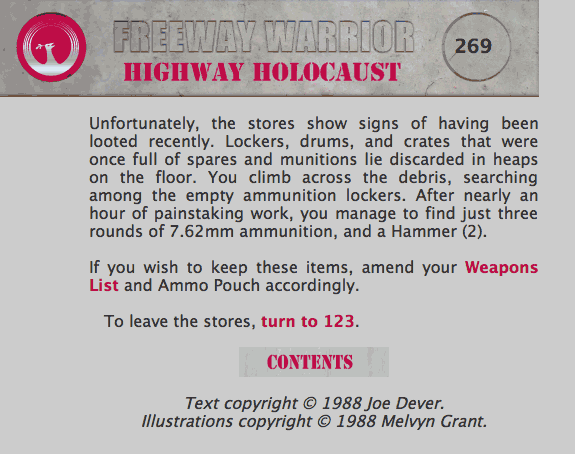 Bullets, wahoo! And a hammer. If this were the Eighties I'd be tempted to say it's "Hammer Time", but I suspect the supply of low-lying sequined pantaloons is at an all-time low right about now. 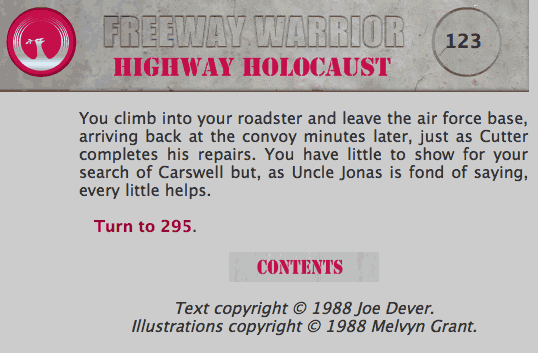 Good ol' Uncle Jonas, always there with a well-timed aphorism that makes you want to stab him in the eye with a fork. Although, let's be honest, he was probably the last surviving member of the Jonas Brothers band, and I bet he did so via the liberal use of a fork on his erstwhile bandmates, Donner-style.

Continuing our musical interlude, it's radio! This is one of the few times the adventure feels a bit dated, because frankly radio died long before the apocalypse. Not that Mr. Dever could have known that was coming in 1988, busy as he was planning to have Mr. Grant for dinner. Ahem.

20 Responses to All aboard the post-Apocalyptic Soul Train