Do Androids dream of … kicking each other's butts?

Before posting the poll, for those of you who don't know, Roy Batty is the bad-ass android/replicant from "Blade Runner", played by Rutger Hauer. Data is a milk-skinned emo-seeking android from "Star Trek: The Next Generation." Here, it's these guys: 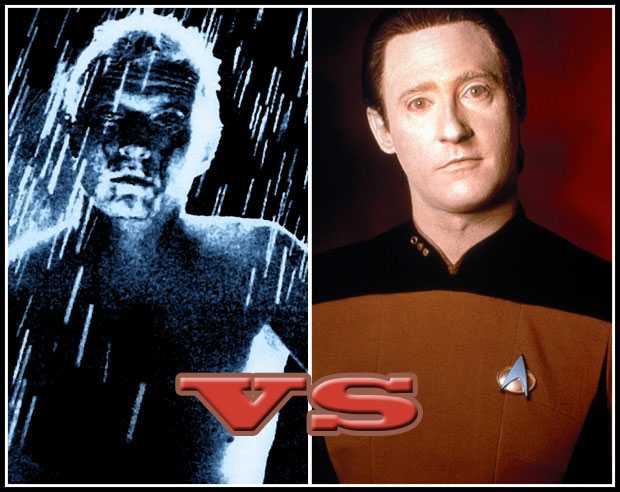 It's tempting to just declare Roy the winner here because he came from a darker, more dangerous universe than the sunny Lieutenant Commander Data. However, Roy faced off against a regular human and lost, and Data's stronger, faster, and smarter than Harrison Ford any day of the week and twice on any day he plays an Amish character. Nothing against the Amish, you understand, but they're not going to be reading this anyway so why not engage in totally made-up discrimination with no basis in reality? After all, it IS the holiday season!

On the other hand, Data has been shown to be susceptible to psychological manipulation, something this particular replicant excels at.

Personally I'd still stick with the replicant, because Data had to prove he was "fully functional" with Tasha Yar, and for that he deserves a swift mercy killing. But which would you choose?

20 Responses to Do Androids dream of … kicking each other's butts?