Apparently our adventurous spirit reigns supreme in post-Apocalyptic Texas, as we've decided to go ahead and mosey (you're required by law to mosey instead of walk in Texas, despite the heretic "Walker", Texas Ranger) into Denton to see what's behind the plume of exhaust we spied. 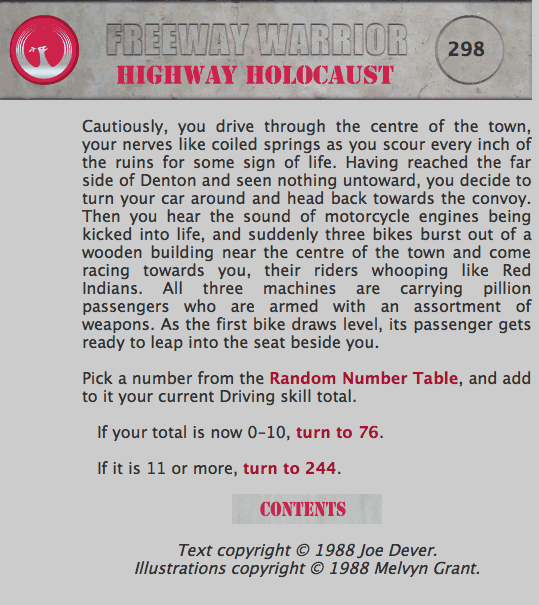 Zoicks! I guess it's no good having binoculars if you don't believe your lying eyes. We have a massive driving skill of ... three. Combined with another three from the Random Roll, that leads us to: 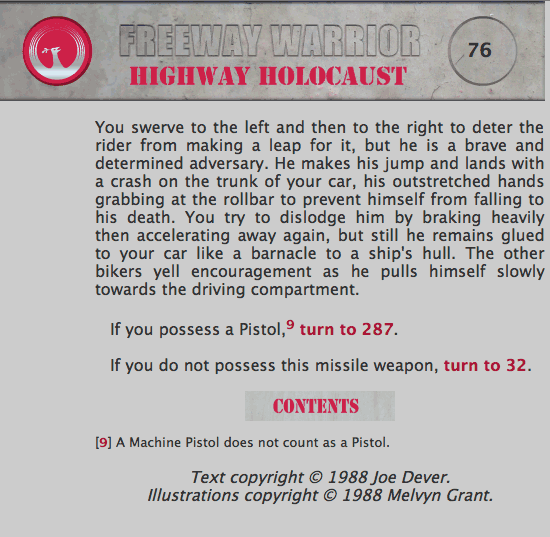 First of all, I wish to take exception to the idea that a machine pistol does not count as a pistol. It's right there in the name, people! Mr. Dever hails from England, however, if my spotty recollection of something I almost read on the Internet is a reliable guide -- and how could it not be?! -- where guns aren't as much in evidence as in modern America, much less an America after the Apocalypse. So we can forgive him this once. 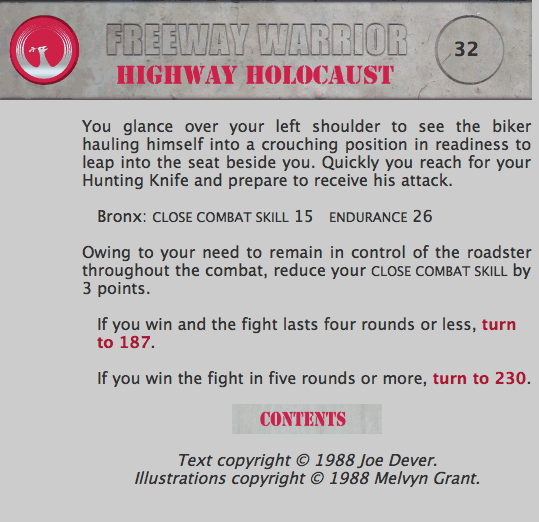 Oh dear. Our worst-case scenario has come to fruition, a close encounter with a melee weapon. Nonetheless, sporting our massive Close Combat Skill of twelve (which, need I remind you, is the lowest you can get) and our even more manly Endurance of twenty (also the lowest you can get), we engage the young ruffian in our tete-a-tete. Even though he has 50% more combat skill than we do and more health as well. Plus we're driving. And I think we just wet ourselves.

My random rolls were 7, 5, 9, 5, 5, and 9. Nines are the best because with a -6 combat skill deferential the enemy takes 8 damage to our 0. However, only one of those nines came into play, because we took five rounds to get him dead and us down to 5 END. Accordingly, we turn to the section for what happens if you're too slow sending Mad Max on to his untimely demise: 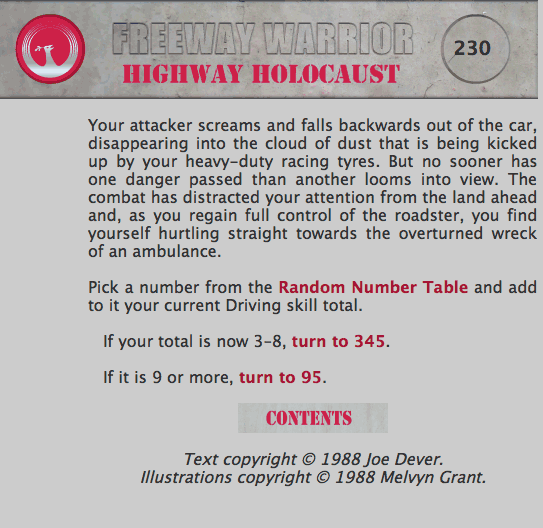 We lived! I was sure taking too long would result in a fiery cataclysm and long faces at our funeral. Which would belong to the coyotes gnawing our bones, because no way the convoy comes down here to find out what happened to their little buddy.

Unfortunately we still have to deal with our fairly pathetic driving skill. Closing my eyes and spinning the Random Number chart, I get ... a three. That's probably not going to be good. 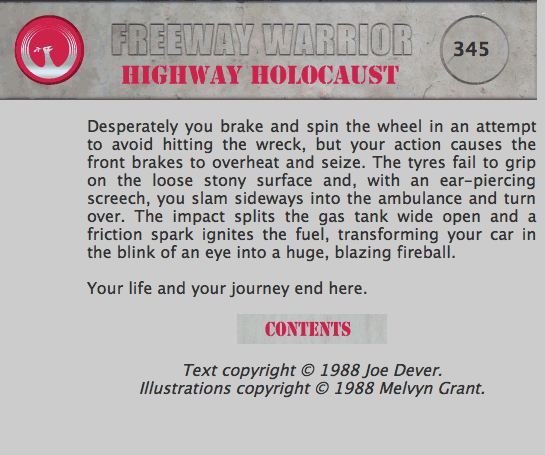 Nope. Not good at all.

And so it ends, kids, with our hot-rod wrapped around our hot-bod, lost and forgotten in the wastes of Texas. Kind of like Rick Perry's Presidential campaign! Ha, that was just a topical reference in the finest Late Night tradition, please don't read anything into it. Should I start my apology letter now? I should warn you, I plan on pleading heartbreak in the face of our crushing defeat, and there will be lots of spineless weeping.

So the question becomes, "Now what?" Which is where you come in again:

Make your case in the comments!