This week, I give you two characters who are virtually identical in concept, neither of whom anyone gives a crap about. To make it (slightly) more compelling, the visuals are from the live-action versions of them both. Ladies and gentlemen, I present "Hawkeye vs. Green Arrow", aka "The Carnival of Suckage": 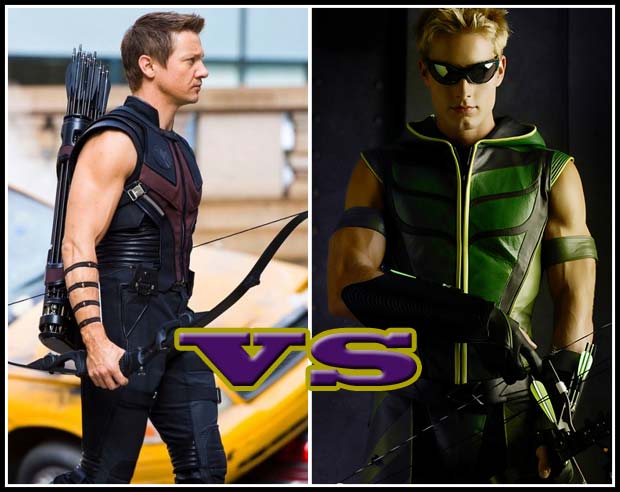 Going purely by the costume design of these two incarnations, I have to go Green Arrow. And that was done with a TV show budget, folks. I dig the shades, I think they're the ideal replacement for the traditional domino mask. Of course, that innovation derives partly from Millar and Hitch's "Ultimates" version of Hawkeye, by way of the Matrix. Come to think of it, a lot of that series was Neo-flavored ...

I also like GA's bow better. Those compound pulleys rock. And the green and yellow look more super-heroish as contrasted to the by-now-boring black leather of movie Hawkeye.

Getting beyond the movies, here they are in their more traditional comic book guises: 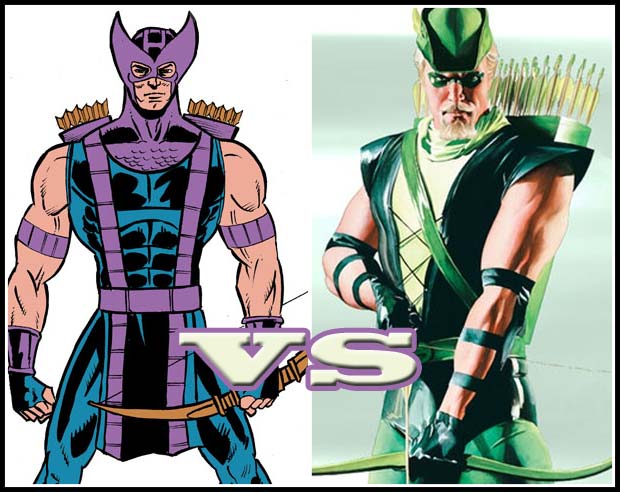 I wanted to say this was a tougher call, because honestly, Green Arrow, what is up with that hat? Yes, I get it, Robin Hood, but if you're going to be running around in a leather vest with a yellow-green sleeveless turtleneck and a literal feather in your cap, I don't think "Merry Men" is the image you want to conjure.

However, next to the Brobdingnagian fashion disaster that is the West Coast Avengers' flagship character, all other sartorial horror shows must give way. It's bad enough you stole Wolverine's mask, Hawkeye, but did you have to rub salt in the wound by dying it purple? Then, just to be sure people would have at least some clue to identify him in case the horrific outfit didn't give it away, he plastered a big "H" on his forehead.

Actually, now that I look at these designs, I wonder if that monstrosity on his head isn't actually supposed to be Green Arrow's forked beard turned upside down ... hmm, I think I might be on to some sort of conspiracy here. I'll have to ask Jim Shooter now that he has a blog.

Once you get past the costumes (if you can), you have to consider their powers, since in theory this is a head-to-head matchup kind of thing. On the plus side, this is the one fight they'll ever be in where the other guy doesn't blink and say "Seriously? Arrows? You know we've mastered gunpowder now, right? I mean, even COBRA has lasers, dude, and that's speed-of-light we're talking about." So they have that going for them.

Both are known for, in the past, using a wide variety of trick arrows. The boxing-glove arrow is a staple of the super-hero archer, of course, and I think GA came up with that one. But he didn't stop there -- after all, he knows Batman, and why fit all those amazing gadgets into an easy-to-wear belt when you can super-size them and make yourself carry them in a giant quiver on your back?! You've got your classic Green Arrow acid arrows, smoke arrows, and grenade arrows, sure, but then you get to the truly epic stuff like the Phantom Zone arrow. If you squint, that's cool.

But my favorite Green Arrow trick arrow is the boomerang arrow because how in the name of physics is that supposed to effing work?! Here's my challenge to you, HeroMachine Nation: Go buy a boomerang, then glue a stick to it, and see if it comes back to you. This is putting aside the question of whether any self-respecting arrow would come back to a guy dressed like either of these losers in the first place, of course.

Hawkeye's no better, as you would expect from a poorly-dressed knock-off of a second-rate character. They share all the classics in terms of gimmicks, but whereas GA has the Phantom Zone arrow (send criminals to an alternate dimension where they're harmless!), Hawkeye's signature is the Pym Particles arrow.

I crap you negatory. That is an actual arrow actually used in an actual comic book. By Hawkeye. For reals.

Yes, his master plan is to give the other guy the same super powers used by an Avenger!

Although now that I think about it, as lame as Hank Pym tend to be, maybe that's not such a bad idea ...

But you've had enough of my nerd-rage spittle flung upon you, gentle reader, so I turn it over to you: Which of the two super-hero archers would you prefer, and why?