Last week we spent some time deciding what skills and gear our "Freeway Warrior" would sport. We decided to put two points into Shooting, one point into Perception, and one point into Fieldcraft. Being on the wimpy side of the Endurance scale, apparently we thought that it would be better to stay far away from danger by toting a rifle, being smart enough to see trouble coming before it gets close, and wilderness savvy enough to hide if it comes down to it.

To that end we settled on a compass so we know which way to run, binoculars so we can see our enemies at even longer distances, three square meals (running burns calories, folks!), and a geiger counter. Here's how our character sheet looks:

And with that, we're off!

I want to know where I can apply for the "Roustabout" position, so I can then become a former one. What a great job title. Nonetheless, the lucrative Roustabouting profession clearly did not teach Long Jake Bannerman (seriously, this guy rolled a perfect 20 on the "awesome fraternity names" chart) never learned the first rule of Post-Apocalyptic Fighting, which is "never go out alone". Duh.

In a fuel-starved world, what do you think the odds are that we proceed at a cautious 55 mph with properly inflated tires to assure the best possible gas mileage? That's right, zero: We roar down Highway 75 driving that bad boy like we stole it! Which we probably did, come to think of it ... 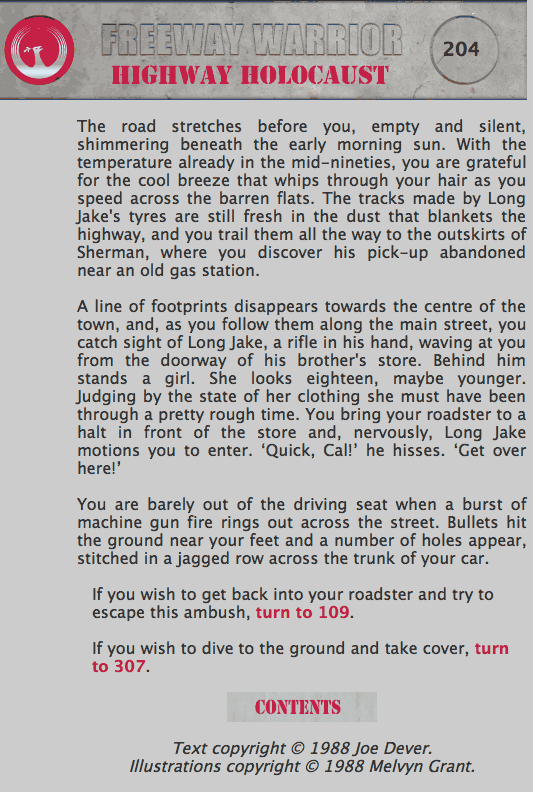 Ambushed! My immediate question is, do you think our buddy Long Jake is in on the ambush, probably via coercion of some sort? I tend to think probably not, as he could've just as easily gotten us into the building and shanghaied if that's what they wanted. On the other hand, why would ambushers wait for us to get there if Jake hadn't told them someone was coming? Otherwise they'd have just popped him and her right off. Unless the captured him before the radio transmission, forced him to tell them everything, then laid up for us. And they're just not very good at ambushing ...

Regardless, it's up to you, fellow adventurers -- what shall we do? Explain your reasoning in the comments!