Apologies for the late posting, I'm feeling a little blue today and just didn't get to it at the usual time. But now, bring on the frothing nerd rage! 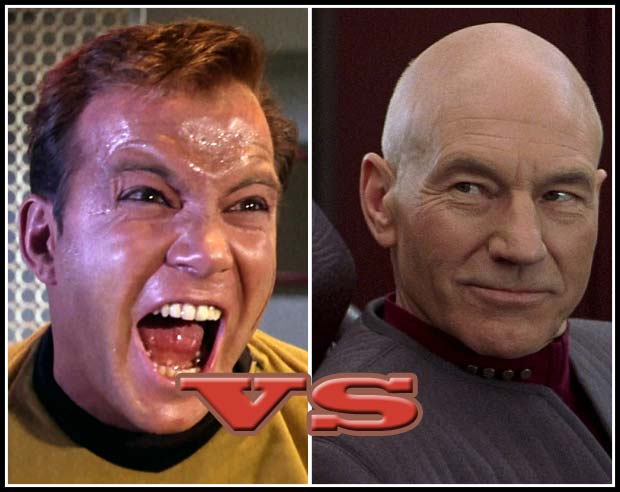 Old school versus new school. Dashing man of action versus cerebral man of reason. Do you let your fists do the talking or do you do your talking with your awesome bald head?

This is a tough call because you're talking about two very different eras in the Federation's history. Kirk was the last of the Devil-may-care buccaneer style captain, while Picard was much more of a Renaissance man. You'd like to have a beer with Kirk before hitting on the local green-skinned girls, while with Picard you'd be more likely to imbibe a well-bodied Merlot while playing the recorder.

On the other hand, Picard can flat-out kick ass when he needs to. He took on Klingons in hand-to-hand combat, and won! OK, maybe that's not the best example, because apparently some alien testicle-eating virus had infected the Klingon homeworld by the time Next Generation started, but still. They have bony heads, and those things hurt when you hit 'em.

Oh sure, Kirk got to wench his way across the better part of the known galaxy, vamping and tramping with every able-bodied female he met. And Picard's big adventure was to live an entire lifetime as an old married gardener whose big accomplishment was learning to play the flute before getting wiped off the face of the planet.

So I'd say Kirk is probably the young person's ideal of a swashbuckling adventurer, whereas Picard represents a more mature, measured, thinking person's model.

But all of that is moot, since Picard is bald and therefore he wins.

45 Responses to Poll Position: Star Trekkin' Across the Universe